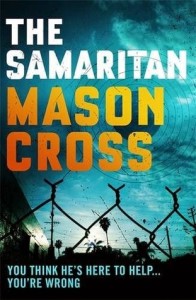 When the mutilated body of a young woman is discovered in the Santa Monica Mountains, LAPD Detective Jessica Allen knows this isn’t the work of a first-time killer. That’s when Carter Blake shows up to volunteer his services. He’s a skilled manhunter with an uncanny ability to predict the Samaritan’s next moves. At first, Allen and her colleagues are suspicious. After all, their new ally shares some uncomfortable similarities to the man they’re tracking.

So before I start talking about The Samaritan have you read The Killing Season? If not, well that is the first Carter Blake thriller so you could catch up before The Samaritan is released later this year – I don’t think you will be disappointed and unlike me you won’t then have to wait long for more…

The Killing Season introduced us to Carter Blake (not his real name) who basically finds people for a living. Very basically. Which is what he is doing when we catch up with him again at the beginning of The Samaritan – then he spots a news story on the television and the information being reported sends him head first into another manhunt, where he and the killer have a mutual past experience.

I love these because they are highly engaging, terribly addictive (I read this in one sitting, as I did The Killing Season) with intelligent characters, terrific plot construction that keeps you on your toes and a real sense of adventure. Carter Blake really is wonderfully drawn, a la Reacher if you want a comparison to see if you might like him, but for me far more interesting and with a much greater depth. Mason Cross does a great job of allowing us to know him a little at a time, this instalment giving a little more information about his background and past experiences which make him all the more compelling.

I was also rather fond of our “detective on the spot” Jessica Allen – she has a little of the rogue about her just like Carter, there were some nice interactions between the pair which enhanced the story and made it even more gripping, especially as we headed into the final showdown.

The thriller elements are really really well done, keeping you on the edge of your seat, there are some beautiful twists and turns, a gorgeous flow to the prose and generally speaking this is a damn good read. Definitively now one of the series I shall be following avidly and probably re-reading a lot, the Carter Blake series is one of those you can sink into, have a great time with, and re-emerge later wishing you had another 10 books featuring Carter on the shelf to read already.

Pure reading adrenalin joy. That is all. 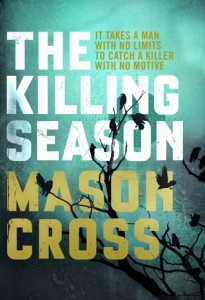 The first thing you should know about me is that my name is not Carter Blake.
That name no more belongs to me than the hotel room I was occupying when the call came in.

When Caleb Wardell, the infamous ‘Chicago Sniper’, escapes from death row two weeks before his execution, the FBI calls on the services of Carter Blake, a man with certain specialised talents whose skills lie in finding those who don’t want to be found. A man to whom Wardell is no stranger.

Along with Elaine Banner, an ambitious special agent juggling life as a single mother with her increasingly high-flying career, Blake must track Wardell down as he cuts a swathe across America, apparently killing at random.

But Blake and Banner soon find themselves sidelined from the case. And as they try desperately to second guess a man who kills purely for the thrill of it, they uncover a hornets’ nest of lies and corruption. Now Blake must break the rules and go head to head with the FBI if he is to stop Wardell and expose a deadly conspiracy that will rock the country.