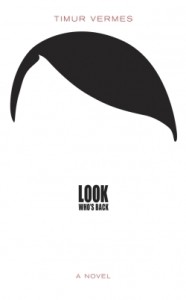 Summer 2011. Berlin. Adolf Hitler wakes up on a patch of ground, alive and well. Things have changed – no Eva Braun, no Nazi party, no war. Hitler barely recognises his beloved Fatherland, filled with immigrants and run by a woman. People certainly recognise him, though – as a brilliant, satirical impersonator who refuses to break character. The unthinkable, the inevitable, happens, and the ranting Hitler takes off, goes viral, becomes a YouTube star, gets his own TV show, becomes someone who people listen to. All while he’s still trying to convince people that yes, it really is him, and yes, he really means it.

There have already been mixed opinions on this one – basically surrounding the sense or not of writing what is basically a comedy of errors and making one of the most villified characters in history – Hitler – its main protagonist. Before I dived in, I read several online discussions, a few non-spoiler reviews and was intrigued to see just what all the fuss was about…

How did I find it? Well I laughed a lot, sometimes in a vaguely guilty way admittedly. Mainly in the portions that dealt with Hitler’s interactions with the media – where they are assuming he is an impersonator, of course, and he is solidly and absolutely himself. Add to that, especially in the early chapters, his despair at the state of the world – and his discovery of television cookery shows – and the whole thing is ironically amusing.

I can see it would be fairly easy to find a reason to be offended by this book but I see no need. The author never tries to make Hitler likeable  (or unlikeable for that matter) or offer excuses for his actions, nor does he pretend that this is anything other than exactly what it is – a darkly imaginative fantasy tale with perhaps a touch of social commentary.

The only small downside for me was perhaps that this is aimed very much at the German audience – I’m sure a lot of the satire went straight over my head, especially with regards to the pop culture of that country – there were media releases and tv shows that I was obviously expected to know about that I assume would have made certain portions of the book more humerous – but mostly I would say I tootled along fairly well.

I also think that people with a better knowledge than I possess of Hitler’s period of history would get more out of it – when he is talking about his political party and the players in the war I was often a bit lost because my education in this matter stops with the big stuff (the horrific treatment of the Jewish community) and I also knew the name of Hitler’s mistress. Apart from that I am actually quite ashamed to admit I know very little detail. A fact I should perhaps rectify…

Overall though this was an intriguing, humerous and fascinating reading experience which I enjoyed very much. Beautifully translated as well. Kudos.

Timur Vermes was born in Nuremburg in 1967, the son of a German mother and a Hungarian father who fled the country in 1956. He studied history and politics and went on to become a journalist. He has written for teh Abendzeitung and the Cologne Express and worked for various magazines. He has ghostwritten several books since 2007. Look Who’s Back is his first novel.