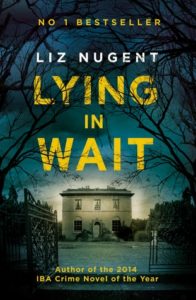 Today I’m REALLY happy to welcome Liz Nugent to the blog (All the best people are called Liz you know) talking a little about Lying In Wait – a brilliant haunting novel that made it easily into my Top Ten of 2016.

So having loved Unravelling Oliver I have to say I loved Lying in Wait even more, it making my top ten this year – mostly I want to know about the creation of Lydia – SUCH a brilliant character, she drove me insane. Where did she come from?

I was thrilled to be in your top ten and am so grateful to you for all of the support since I started these book writing antics!

I don’t think there are enough bad mothers in literature. Bad fathers are plentiful but usually, the mothers are the ones picking up the pieces. I wanted to write about a bad mother, but then I thought ‘what if she is really deluded and thinks she’s a brilliant mother?’ So I began to write this horrifically damaged woman and for some reason, I found it easy to get inside her head and write from her point of view. Snobbery is hilarious and I had great fun with that aspect of her personality but I think I was probably highly influenced by other women in literature: Lady Macbeth, Medea, Mrs Danvers and Miss Havisham.

You’ve got a killer opening line that I won’t repeat here although it is in my review. How important is it do you think to draw the reader in from the very first page? Especially when it comes to psychological thrillers of which there are many and varied.

I am quite addicted to social media and I think that as a result, my attention span is now only about fifteen minutes long. And I think that’s the same for a lot of people so it’s really important to grab the reader by the throat with the very first line. It is crucial that there be a question in that line that demands an answer- the who or the why, or both. With both of my novels, I try to demonstrate what kind of character we are dealing with in that opening page and hopefully, the reader will be intrigued enough to keep going.

You concentrate in both novels on aftermath, rather than whodunit, which I find brilliantly refreshing. You kind of take your characters apart so the readers get ever more drawn into their vortex. And you’ve got a KILLER ending to Lying in Wait that still makes me randomly think about it now. How do you go about plotting and construction?

I am ok at plotting but structure is my downfall and in the case of both books, my editor played a huge role in the way the story unfolded so I must give due credit there to Patricia Deevy. The ending to Lying in Wait came at the last minute when I was up against a deadline. Without giving too much away, I knew that a certain character was going to be badly damaged but I didn’t know the extent of the damage until I went to write it. It is pretty dark. Readers have told me how shocked they were. I like to build expectations and then defy them. Har har.

Do you have a favourite character you have created? I’m actually quite fond of Oliver it has to be said. I do like the dark ones.

Yes, I must admit I have a soft spot for Oliver. I lived with him for a lot longer than any other character because I wrote Unravelling Oliver on and off over the course of about six years. When you write a character from a first person perspective, you really need to inhabit their mind and Oliver feels very real to me still. I could never condone what he did, but I understand it completely. He made some very bad decisions that led to tragedy for everyone who came close to him, and ultimately to his own downfall.

Having said that, Lydia is even more monstrous and even less sympathetic, but I understand her too. I’d quite like to visit her.

Do you have a book that you’ve read in 2016 that you would like to recommend to others? I know its hard to choose just one. I had 10 but I’m nicer to myself…

I just finished reading The Dark Adapted Eye by Ruth Rendell (writing as Barbara Vine) and am giddy with excitement about it. I cannot understand why I’d never heard of it before. It is absolutely superb and stands up to anything written by Du Maurier or the Bronte sisters. Secrets and lies and damaged women and social snobbery. Right up my steet!

The next novel is called Skin Deep and centres on a woman who is deeply scarred, inside and out.

The last people who expect to be meeting with a drug-addicted prostitute are a respected judge and his reclusive wife. And they certainly don’t plan to kill her and bury her in their exquisite suburban garden.

Yet Andrew and Lydia Fitzsimons find themselves in this unfortunate situation.

While Lydia does all she can to protect their innocent son Laurence and their social standing, her husband begins to falls apart.

But Laurence is not as naïve as Lydia thinks. And his obsession with the dead girl’s family may be the undoing of his own.

Read my review of Lying in Wait HERE 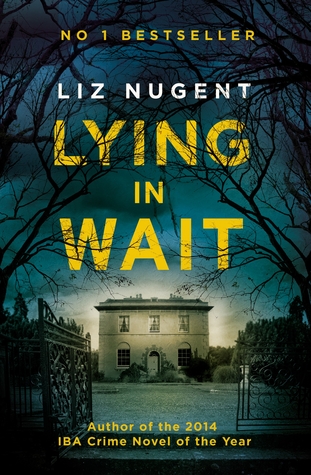