M R Carey talks The Girl With All The Gifts. A reminder of why I read. 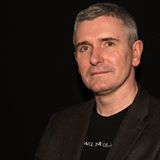 I did have a bit of a fangirl moment when Mr Carey agreed to answer some questions for me it has to be said – The Girl with all The Gifts was an amazing read (you can find my review in a while) and one of a couple of books I’ve read lately that reminded me why I love to read in the first place, all reviewing aside. So here is what he had to tell me.

Tell us a little about how the story came into focus for you.

It started out fairly traumatically.  I’d committed to producing a short story for an anthology of dark fantasy and horror on the theme of “school days”.  Charlaine Harris and Toni Kelner were editing, and I’d had to back out of their previous collection because of time problems, so I was determined not to miss the boat again.

But having said I’d do it, I couldn’t come up with a single workable idea.  The deadline started to loom, and everything that came into my head was sort of a grimdark Harry Potter riff – not the slightest bit original, and not appealing either.

Then I woke up one morning with the idea of Melanie in my mind.  There was no story, to start with – there was just her.  This little girl sitting in a classroom, writing an essay about what she was going to do when she grew up.  Only that was never going to happen because she was already dead and didn’t know it.

Everything flowed from that first image, and it flowed really quickly.  I wrote the short story, Iphigenia In Aulis, in four days, and for two of those I was in Norway for a comics convention.  It was one of those rare situations where the story obsesses you so much that you use every spare moment to write some more of it down.  I was sneaking away to the hotel room in between panels to add a few more paragraphs, and writing in bed before I got up to shower.

And once the short was done, I had the very strong feeling that the story wasn’t.  I persuaded my editors at Orbit to vary out my contract so I could write The Girl With All the Gifts.  Fortunately they were really flexible and helpful.  Of course, it helped that they were sold on the story.
How difficult is it to put a new spin on a popular type of fiction ?

It’s both difficult and nebulous.  Sometimes you think you’re doing something that’s new and fresh, but then when you read it back you discover that it’s really not.

And of course the genre changes under you, because other works are being published all the time.  Early readers of The Girl With All the Gifts started to compare it to Justin Cronin’s The Passage, which I hadn’t read and hadn’t been aware of, and I was scared for a while that I’d made a blind jump into a rolling bandwagon.  Then I read The Passage, which I loved, and realised that it was okay.  There are definitely thematic and tonal parallels, but we’re not doing the same thing.

It’s really noticeable now that we’re entering a new, secondary phase of zombie fictions – where the zombie apocalypse is backdrop and the core situation is something else.  The Scandinavian short The Unliving by Hugo Lilja would be a good example.  And I assume this movie that Arnie Schwarzenegger is working on, Maggie, would be another.  But when I was writing that wasn’t really in my mind.  If I was inspired by any other existing work, it was that moment at the start of Land Of the Dead where the zombie musicians are trying to play their instruments.  The human mind trying to break free of the meat and find itself.
Will there be any more novels set in this world?

I don’t have any plans to write a sequel – but there is a sequel to be written.  It would just be such a different book, in tone and even in genre, that I’d need to think long and hard about how to approach it.  The protagonist would be a human child adopted by type two zombies and growing up among them.  That would be a really poignant situation, I think, but I have no idea yet where I’d go with it.
Do you have a personal favourite character from the book?

Well Melanie was the most fun to write!  The main aim of using the present tense and the slightly staccato, declarative style was to portray the world as a ten-year-old girl – bright but massively ignorant on most topics – might see it.  I loved working the changes, once they were all on their journey; showing how the balance of power shifts and how Melanie’s relationship with all the adults has to shift with it.

Sergeant Parks was also a favourite, in a very different way.  The short story ends with Melanie and Parks reaching a sort of grudging respect as they prepare to fight and die back-to-back as the base falls.  I wanted there to be an analogue for that moment in the novel, too, and it took me a long time to figure out what it would be.  That moment when they’re talking after the fire and he asks one last favour of her – it felt very right.

As a writer of comic books, novels and films do you prefer one in particular or are you in love with all 3?

I wouldn’t say I have a preference, but it’s felt recently as though my centre of gravity has been shifting.  For a long time, comics felt like my real job.  I was a comics writer who sometimes dabbled in other media.  Then prose fiction became a bigger and bigger part of my professional life and my imaginative life, and I thought of myself as a comics writer and a writer of prose.  And last year, very much to my surprise, I started to think of myself as a screenwriter too.  I mean, in the sense that I didn’t feel like I was faking it any more – I felt like I was really doing it.

The truth is, though, working in different media is an amazing blessing and an amazing opportunity.  It doesn’t come easily, but I think it ensures that you keep experimenting.  You don’t stay within your comfort zone quite so much, because you’re constantly putting one point of view down and picking up another.
Last book you read that stayed with you

NOS4R2, by Joe Hill.  I’ve loved pretty much everything Hill has written, barring maybe one or two of the short stories, but NOS4R2 felt like something totally new and totally enthralling.  Epic fantasy has been with us for a long time: epic horror takes some doing.
3 people dead or alive you would like to go for a drink with.

And a note for Mr Carey: Yes. I did. VERY much. Almost perfect. And if you are reading this – I’ll have more like this please. AND more of the other. You will certainly know what I mean.

3 Responses to M R Carey talks The Girl With All The Gifts. A reminder of why I read.