Mel Sherratt is Watching Over You. Or is it Ella? Shiver. 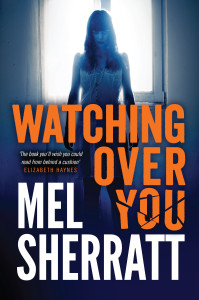 So the latest release from Mel Sherratt is “Watching over You” a frightening cautionary tale of life, featuring one of the scariest female characters I’ve met recently in fiction. I loved this one quite a lot (review to follow) it was in my top 5 reads of 2013 and I was lucky enough to meet the lovely author recently at her book launch. Since then I’ve managed to ask her a few pertinent (well things I wanted to know anyway) questions and here is what she had to tell me.

Ella is truly terrifying – tell me she is NOT based on anyone you know!

Absolutely not – or I would be running the other way too!  In my mind, Ella started off as a lonely woman who thought she had found a friend in her new tenant, Charley. But her obsession with wanting to be with someone who cared about her equally caused Ella to read the wrong signs. Charley was wary of Ella the closer she came but even she wasn’t prepared for how she eventually flipped. On the final read through, Ella even scared me. Although, I must admit, I never set out to create such a terrifying character. She just became more and more unhinged as I wrote her.

How did the story first start to take shape in your mind?

It was after watching the film Single White Female again that I thought it would be good to do something similar but more up to date with social media of today. As the story evolved, the social media side of it began to disappear. Instead, Ella became obsessed with embroiling herself into Charley’s day-to-day life. Things like, you know, sneaking into her flat when she wasn’t home, following her to work, spying on her…

Is it difficult to write such a scary story and keep it authentic?

Very difficult. I wanted to create something whereby a reader could really feel the fear and emotion building up yet also not be thinking ‘this wouldn’t happen in real life.’ To do this, Charley had to be put in some predicaments to cause tension or there wouldn’t have been a story. It was a fine line to tread to tie up all the loose ends and I’m sure it will be good for some, but not for others. It’s getting some very mixed responses because of this too. Ultimately though, it’s fiction, no matter how real it might feel.

I’m just finishing the follow on from my crime thriller, TAUNTING THE DEAD, where we get to meet Detective Sergeant Allie Shenton again. After that I’m writing another psychological thriller.

Broken, Daniel Clay. It’s the book I read that prompted me to change genres – from women’s fiction to crime/psychological thrillers. I loved its gritty style.

A long drive out with my fella to a pub in the countryside for a Sunday roast with all the trimmings.

One author you wish would write a book a week?

Only one? Liz, that’s cruel. Well, I will have to say… Elizabeth Haynes.

Following the death of her husband and unborn child, Charley Belington sells the family home and bravely starts life over again. On moving into a new flat, she is befriended by her landlady, Ella, who seems like the perfect friend and confidante. But, unbeknownst to Charley, Ella is fighting her own dark and dirty demons as the fallout from a horrific childhood sends her spiraling down into madness ‒ and unspeakable obsessions.

Well first things first just LOOK at that cover. Brilliant. That had me nervous before I even read the first page – I stocked up on chocolate, ensured that my axe proof duvet was at the ready and a bit like going back to childhood and watching Dr Who from behind the sofa, I cautiously made my way into the story…

So. Ella. What a great character. God she’s scary – so normal on the outside, at least at first glance, yet on the inside a complete psychopath. Ok, so she had a rubbish childhood- HORRIFIC – you should, I suppose, have some sympathy for her. And I guess I did – for a while..but this is cleverly written and has you wondering if she would still be an extremely dangerous person even if her formative years had been all rainbows and kittens. Sometimes evil is just that. So thats one side of this book and its compelling, totally frightening and utterly addictive.

Then you have Charley who is perfectly lovely – she has also suffered a tragedy, that being what puts her in the path of Ella in the first place as she tries to forge out a life for herself in unexpected and terrible circumstances.As  fate would have it her very real chance at new happiness may be thwarted by the simple fact that she is accepting of Ella’s manipulative friendship. Seemingly she has found a confidante, someone to help her through her grief and give her some solid ground – but as she soon realises, there is something very wrong here. And escape may be impossible.

The developing relationship between these two strong female leads is what keeps you turning the pages – we, the readers, have a greater insight into Ella than Charley has of course and you may be like me and spend most of the time yelling “RUN RUN! DON’T DO THAT” at Charley and half expecting her to hear you, so involved will you be pretty much from the start and the entire way through.

I read into the early hours of this morning, then grumped my way through getting the children to school before diving back into this tale and finally getting to the heart stopping and extremely thrilling conclusion. The purely flowing narrative keeps you on your toes and yes, you will worry for the cat.

Powerful stuff and a pure adrenalin rush of reading joy. I love it. Although no more for a while please..I’m off to read some Enid Blyton while my heart settles back into its normal routine.