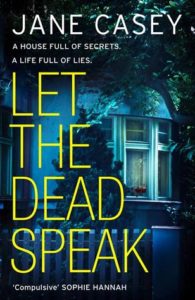 When eighteen-year-old Chloe Emery returns to her West London home she finds her mother missing, the house covered in blood. Everything points to murder, except for one thing: there s no sign of the body.

London detective Maeve Kerrigan and the homicide team turn their attention to the neighbours. The ultra-religious Norrises are acting suspiciously; their teenage daughter and Chloe Emery definitely have something to hide. Then there s William Turner, once accused of stabbing a schoolmate and the neighborhood s favorite criminal. Is he merely a scapegoat, or is there more behind the charismatic facade?

As a body fails to materialize, Maeve must piece together a patchwork of testimonies and accusations. Who is lying, and who is not? And soon Maeve starts to realize that not only will the answer lead to Kate Emery, but more lives may hang in the balance.

I just want it to be known that Jane Casey is now forgiven for making me wait over a year for this (how did I COPE) because it was worth the wait (and then some) it turns out that delayed gratification really is a thing. Just to be clear I’d rather really that she wrote a book a week but we can’t have everything in life. Never mind.

ANYWAY Let The Dead Speak then – another outing for Maeve and Derwent (swoon) and of course all the rest, much as I adore the main pair the group dynamic over the course of the novels has ingrained itself on my brain, in fact this time it was Chris Pettifer who made me snort a giggle with a throwaway comment that happened to mirror exactly what I was thinking in that moment. But I digress…

In this instalment a young girl arrives home unexpectedly to find her house covered in blood and her mother gone.  A murder enquiry is launched even with the lack of a body. Derwent is back from holiday, meanwhile Maeve is fretting her new power and responsibility whilst dealing with a incomer who doesn’t seem terribly useful. The neighbours are all a bit barmy, everyone is hiding something, so you know. Best get untangling that mess then which is exactly what our guys set out to do. Things are going to be somewhat fraught. WELL it wouldn’t be any fun if they solved it CSI style in an hour would it?

Look what I love about this particular series is the intensely absorbing writing with it’s ironically humerous undertones and the characters that do almost literally live off the page. I honestly have to remember sometimes that they are all fictional, not just those we see every time but anyone caught up in the current investigation. Jane Casey has a character writing superpower, nobody does it better. And I do mean nobody.

Added to that the plotting is so gorgeously realistic and tightly drawn that you never disbelieve any of it. TWISTED too, I do love a good twisty tale and this one had that in spades, especially with reference to some of the personal relationships and goings on. The emotional trauma is in there too, fair warning given, every time I go into a new Kerrigan novel I say SHE WON’T GET ME AGAIN but every time. Bam. Dammit!

I’m not going to say this is the best one yet because I always say that and whilst it may even be true, that is not the point. The point is that this series is consistently of the highest quality and improving ever more with age – Let The Dead Speak is simply one more pearl in an oyster bed chock full of them, it stole my Saturday (I love a good book thief) and I was happily immersed for the entire journey. Never one for backing off from the thought provoking occasionally controversial central themes, always moving her series characters forward and enveloping the reader more into their world, for me Jane Casey is the cream of the crop of UK crime writers. I look forward to each new novel with the fervour of a true believer and I have never once been let down. Not even for a moment, not even with a word.

On a personal note my love for Derwent STILL knows no bounds. Also a new respect developed for Una Burt during this read. I kind of like her. Mainly because I think Maeve really does too. YES I KNOW they are not real…