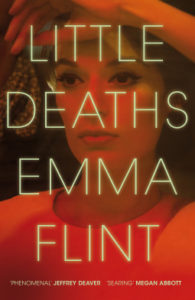 It’s the summer of 1965, and the streets of Queens, New York shimmer in a heatwave. One July morning, Ruth Malone wakes to find a bedroom window wide open and her two young children missing. After a desperate search, the police make a horrifying discovery.

Noting Ruth’s perfectly made-up face and provocative clothing, the empty liquor bottles and love letters that litter her apartment, the detectives leap to convenient conclusions, fuelled by neighbourhood gossip and speculation. Sent to cover the case on his first major assignment, tabloid reporter Pete Wonicke at first can’t help but do the same. But the longer he spends watching Ruth, the more he learns about the darker workings of the police and the press. Soon, Pete begins to doubt everything he thought he knew.

Ruth Malone is enthralling, challenging and secretive – is she really capable of murder?

For me, Little Deaths was a marvel of a novel. Poignant, thought provoking, beautifully written and engaging, also randomly rage inducing – I went through a spectrum of emotions reading Ruth’s story and at the end I was wrung out.

Also, warning: Will cause google mania as you look up the case that Emma Flint took her inspiration from. That is also extraordinarily fascinating. I have today purchased her recommended book on the subject.

Little Deaths starts with a tragedy – two missing children. I don’t think its really a spoiler to say there is not a happy ending for the tiny ones – what follows is a multi layered, insightful and scarily authentic dig around the court of public opinion, the influence of the press and the dogged determination of a police investigation headed up by an obsessed detective.

Set in Queens, New York  in the Summer of 1965 Emma Flint brings that time, that place, to beautiful, occasionally awful, always vivid life. You will see and hear it, find focus in the community surrounding Ruth as she faces every mothers worst nightmare. Ripples going outwards, infecting and affecting so many lives, this novel shows you all the nuances, those places inbetween, it was gripping, utterly gripping from the very first page. That did not go away.

I think it should be noted that in this reviewers opinion  if you are expecting a psychological thriller, a “whodunnit” then you won’t get that. Whilst there is resolution in a sense, whilst there is an element of “Did she Didn’t she” that is the peripheral of Little Deaths. Whilst still intriguing on that level the heart of it is in the characters, their influences, a snapshot of a time, a place, a judgement that one would hope we as a society would have left behind us now. We have not though as the cases glaring at us from todays headlines prove all the time.

I’m back to Little Deaths is a marvel of a novel. Literary crime with a dash of eloquence and a story rooted in the truths we don’t like to think about. 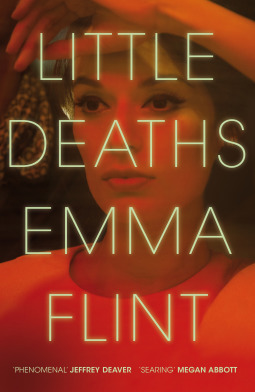