Ones to Watch in 2017: The Marsh King’s Daughter. Karen Dionne 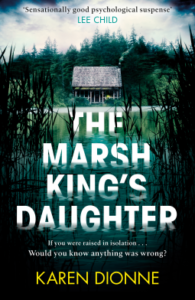 ‘I was born two years into my mother’s captivity. She was three weeks shy of seventeen. If I had known then what I do now, things would have been a lot different. I wouldn’t have adored my father.’

When notorious child abductor – known as the Marsh King – escapes from a maximum security prison, Helena immediately suspects that she and her two young daughters are in danger.

No one, not even her husband, knows the truth about Helena’s past: they don’t know that she was born into captivity, that she had no contact with the outside world before the age of twelve – or that her father raised her to be a killer.

And they don’t know that the Marsh King can survive and hunt in the wilderness better than anyone… except, perhaps his own daughter.

I’m busy getting ahead of myself on reading (who can resist 2017 so far, not me that’s for sure) so this is a bit of an early review but trust me I’ll be talking about this one again nearer to the publication date – having finished it late last night though I can’t resist saying a few words now.

Talk about addictive quality – this book has that in spades and then some, once I started I could barely put it down, if it wasn’t for the fact that I kind of need to keep my job I would have dumped everything in favour of doing this in one sitting – Karen Dionne weaves a beautifully intense story here, with a strong and unique character voice and a twisted fairy tale vibe that is utterly gripping.

The Marsh King’s Daughter is both pacy and considered in its construction – Helena and her unconventional upbringing form the heart of the story, the emotional core, whilst in the present day we are treated to a thrilling hunt through the wilderness as Helena tracks her Father determined to return him to his jail cell. The two strands of the story, all seen through Helena’s eyes, are both totally compelling whilst the descriptively alluring setting comes alive in the telling.

The soul of this one is in the father/daughter relationship – and indeed the blurred lines of Helena’s relationship with her mother – divisive and fascinating, I loved how the author made it all so real and unpredictable. Helena, after all, has a different worldly view, nature AND nurture – watching her come to terms with the realities of her situation, wondering and deciding who she is going to be, creates a strong bond between reader and novel that is intriguingly irresistible.

One Response to Ones to Watch in 2017: The Marsh King’s Daughter. Karen Dionne