Ones to Watch in 2018. The Tall Man Phoebe Locke

SADIE
Sadie Banner has been haunted by the Tall Man in the shadows since she was a child. Terrified of what he might make her do to her baby daughter, she abandons her family. Sixteen years later, she returns, but she can never escape his voice in her head.

AMBER
Two years later, a film crew follows beautiful, unnerving Amber Banner on a media tour of Los Angeles. She’s just been acquitted of a murder charge in a case that held the world’s attention. But who did she kill – and why?

The Tall Man devoured my whole day yesterday. It is utterly gripping from the very first moments and it is inexorably creepy and gets stuck in your head. I spent the entire evening after reading it jumping at shadows. And once, embarrassingly, at my own reflection in the kitchen window…

Anyway, The Tall Man is a legend. Probably. Or possibly you should lock up your daughters – he’ll make you special if you ask him to but my advice would be to keep quiet and hide in that cupboard over there…

Sadie leaves her infant daughter behind, years later that infant daughter is on trial for murder  – but whose murder and why? Phoebe Locke weaves an intimately fly on the wall style tale, using flashback and current time to excellent effect – slowly the story emerges of a shadowy figure haunting lives – but how much of it is in the eye of the beholder and how much of it may be real. Well that is the question that hovers over this entire cast of very intriguing characters and one that might just haunt your dreams a little later on.

I like the documentary elements, it allowed for outside view, the author puts lots of clever little nuances into the narrative, tapping into the urban legend vibe and keeping things off kilter. It is beautifully absorbing one of those books you just live within – the ending was surprising and unpredictable, which of course I loved, Phoebe Locke manages to leave you with some thought provoking tangles – astutely done.

Overall a really excellent, highly addictive read. Definitely one to watch. Would make an incredible tv drama and The Tall Man is not going to leave me alone anytime soon. Damn him! 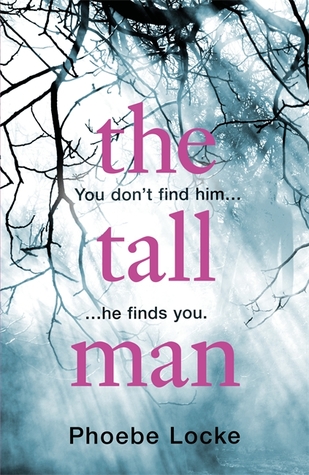