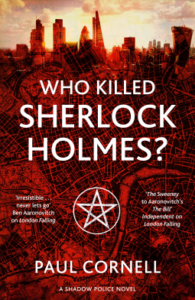 Very happy to welcome Paul Cornell to the blog today as part of the “Who Killed Sherlock Holmes” blog tour. He’s talking about nostalgia properties and information on the entirely brilliant novel follows soon after. Thanks so much Paul!

There’s one enormous reason why nostalgia properties are so big right now, and that’s name recognition. A certain number of audience members are guaranteed for a recognisable brand. With piracy cutting into the bottom line, and audiences having their focus split between so many entertainment choices, any factor that gives a new movie or TV show an edge is pounced on. Of course, often creators are merely representing their own love of an established character. You don’t get Sherlock Holmes fans bigger than Steven Moffat, Mark Gatiss and Rob Doherty. And their versions are the opposite of nostalgic.

My own take on nostalgia is that, as a trait in myself, I’m afraid of it. I can feel that I’m susceptible to it, with my collection of ancient telefantasy, classic Doctor Who and Hammer movies. If I give in to that tendency, I feel, I’ll lose my connection to the now, and might as well check into the waiting room for death. It’s a feeling one of the characters in my Shadow Police novels, Lisa Ross, shares. Lisa is an intelligence analyst for the Metropolitan Police, and, like the rest of my heroes in those books, she’s been cursed with ‘the Sight’, the ability to see the magic and monsters of London. So her skills at picking out patterns and networks gain a whole new dimension. Wandering around a New Age fair, encountering the culture of those orbiting the Sight, she recognises that they’re comfortable, affable, settled, and she yearns for that. But she also feels it would be terrible to let herself be so lulled.

The use of the lead character in the third of these books, Who Killed Sherlock Holmes? was because the title suddenly came into my head, and the rest of the pieces fell into place immediately. In the London of the Shadow Police, ghosts are what every Londoner, living or dead, remembers, so deceased individuals and fictional characters reside where they’re best remembered, visible only to those with the Sight. So of course there’d be a Sherlock Holmes in this world, and he’d be in the Holmes Museum at 221b Baker Street, but he’d be ghostlike, not quite sentient, a flickering mass of all his different versions. So what if our team found that guy lying face down with a ceremonial dagger in his back? The first question they have to ask themselves is almost existential: what does the murder of a ghost even mean? And then we get onto how it might be connected to the crimes of the Conan Doyle stories being re-enacted in their original locations, and, on the matter of nostalgia, whether or not it has anything to do with three different Holmes productions all being filmed in London at the same time.

That last matter lets me indulge in some fond satire of all the current modes of Holmes in the media, but it also lets my heroes ask some desperate questions about how nostalgia shapes a character, because, for them, as for me, it turns out that nostalgia is a matter of life and death.

Paul Cornell has been Hugo-nominated for his work in TV, comics and prose, and is a BSFA award-winner for short fiction. He has also written some of Doctor Who’s best-loved episodes for the BBC, and has more recently written for the Sherlock-inspired TV show Elementary, starring Jonny Lee Miller and Lucy Liu. He lives in Gloucestershire. Find out more www.paulcornell.com and @paul_cornell.

Someone has murdered the ghost of Sherlock Holmes. As a fictional character remembered by the people of London, Holmes’ ghost walked the city, and now someone has put a ceremonial dagger through his chest. What could be the motive? The small team of Metropolitan Police detectives who have The Sight find themselves pursuing a criminal genius who soon lures them into a Sherlockian maze of too many clues and too much evidence. Ross finds herself drawn to an actor who may or may not be a deity, and goes on a quest to win back her happiness. Lofhouse seeks the answers, finally, about why she brought the team together. Quill battles for his sanity. Costain battles for his soul. And Sefton just wants to bring his team back together, even if that takes him to the edge of death.

There is a London that not everyone can see – a London that remembers. Quill and his team have the sight and can follow this shadowy underworld, their cases therefore go nowhere near anything resembling normal – yet Paul Cornell makes it all horribly believable with his pacy and often witty descriptive prose and a character group dynamic that works on every level.

I think this is probably my favourite yet as the author envelops Sherlock Holmes into the story to create a dream read (big fan of Sherlock in all his various forms, me) although unfortunately someone has just killed his ghost. Cue lots of shenanigans as our guys try to track down the culprit and find out just what is going on.

These are great fun to read but they have a dark and emotive heart – this is Fantasy for adults, Paul Cornell does explore some dark themes within the narrative. Especially when it comes to the ongoing storyline, as the main characters grapple with their sight and with their own personal circumstances. In this instalment Quill is facing a real battle in the aftermath of previous events, to some degree they all are and the ever shifting landscape in which they reside is endlessly fascinating.

Never one to let you off easy, Mr Cornell also put a finish on things with a flourish here leaving me desperate for the next book. Who Killed Sherlock Holmes was brilliant and clever and a proper page turner, terrific writing as ever and continuing to build this world into one you want to keep visiting. But you wouldnt want to live there….

You can purchase Who Killed Sherlock Holmes HERE 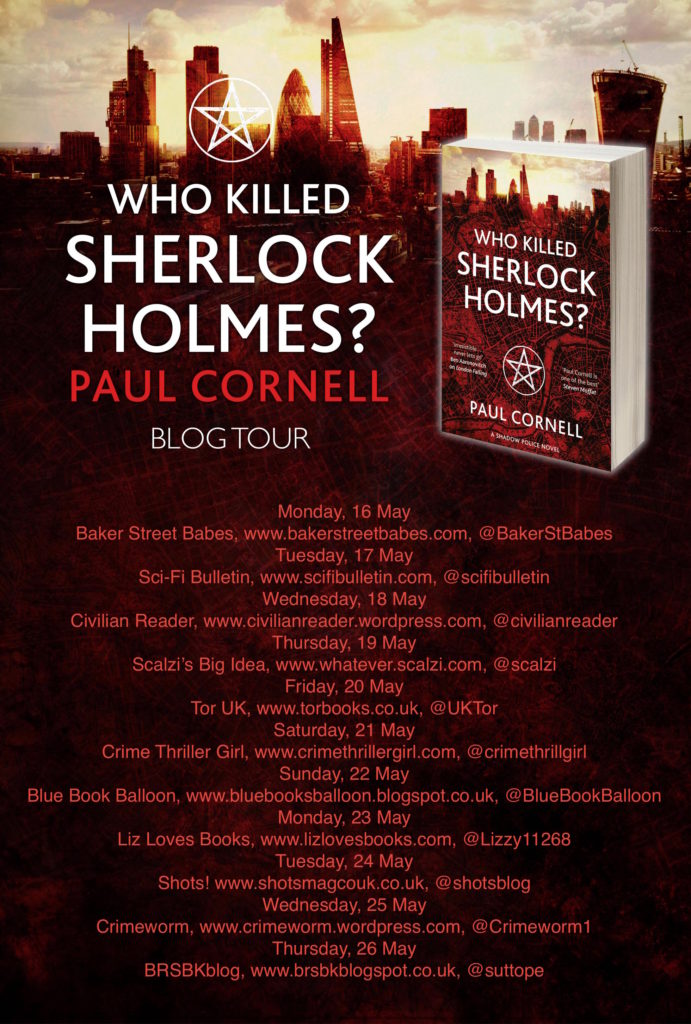