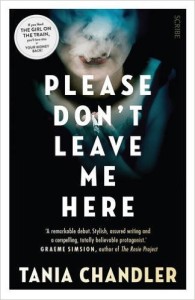 Today I am pleased to welcome Tania Chandler to the blog answering a few questions about her terrific novel “Please Don’t Leave Me Here” as part of the official blog tour. My review will also follow. Thanks Tania!

Can you tell us a little about the inspiration behind the story?

It’s hard to pinpoint where the story idea came from. I kept journals when I was young and, for some reason, one day I was looking back through them and I came across an entry from the day Kurt Cobain was found dead. I was surprised by how different my memory of that time was compared to what I had written on the actual day in my journal. It made me think about the memories we hold and how they become skewed over time.

Initially, I was interested in exploring the way people change — or whether they ever really do — over time, with age, circumstances, relationships. What remains constant and what shifts?

Brigitte really does not have a happy time of it – how do you get into the mindset of a character with her deep seated issues?

Brigitte is a character full of contradictions — she’s deeply flawed, awkward and vulnerable, but also gritty and capable. She tries to do what she thinks is right, but invariably makes bad decisions. I think she’s very human.

I studied drama when I was young and I think writing is a bit like acting when it comes to getting into a character’s head. You have to put yourself into their shoes somehow, imagine how they would feel. We’ve all made wrong choices. And we’ve all experienced love, pain and fear to some degree. As a writer, you can take these feelings and manipulate or amplify them.

My writing buddy, Graeme Simsion, says characters are a third the author, a third somebody the author knows, and a third made up. I can relate to Brigitte’s awkwardness as a young woman, and to her later difficulties that come with being a mother. I’ve known people like Brigitte: somebody that others seem drawn too, and want to love and protect. But she is also one of those people who – through deep emotional need, or lack of love as a child – never believe they are good enough and settle for less than they deserve. The rest is invention.

The relationship between Brigitte and her brother is a fascinating one – they seem to feed off each other sometimes in a negative way – it has always fascinated me how writers develop the character interactions. Is it all planned, as in you know how you want them to come across?

The character of Ryan, and the relationship he has with Brigitte, was one of the easiest parts of the novel to write. I pulled out my hair planning some character interactions, but when I put Brigitte and Ryan together in a scene, the writing seemed to flow and I always knew what they would do without having to think too much about it. They were reckless enough on their own, but together: disaster. However, they were always there for one another when the chips were down. Their troubled childhood would account for much of their behaviour, and their closeness. They were fun to write, even though at times I felt like shaking them!

The mystery element is very well developed – unlike a lot of novels you’ve chosen to do blocks of time rather than alternating throughout which works well – was the ultimate resolution always the one you had in mind?

No! Please Don’t Leave Me Here was always structured in two blocks of time, but I wrote four different endings before I came up with the final one. A lot of writers say you should know the ending before you begin. I learnt this the hard way. I thought I was being clever because even I didn’t know how it was going to end! But apparently nobody likes a deus ex machina resolution. I had to go back and plant clues retrospectively. This was a painstaking process, with my editor encouraging me to add more foreshadowing, and me worrying about being too obvious and giving it away. I think, after all, there’s just enough foreshadowing for attentive readers.

When not writing, what type of novels do you enjoy – any recommendations?

I’ve just finished reading The Girl on the Train. I think I was the only person in the world who hadn’t read it, plus my book has the ‘If you liked The Girl on the Train, you’ll love this’ sticker, so I thought I should get onto it. I’m a sucker for a well-written thriller or crime story, but I also enjoy more literary books. I’m currently reading two excellent new releases by fellow Australian authors: Resurrection Bay by Emma Visckic (crime) and Fever of Animals by Miles Allinson (literary fiction).

I also recently reread The Great Gatsby (I’m sure I read it at high school, but I think maybe I just read the blurb at the time because I couldn’t remember anything about it!) I was blown away by the compelling story, and the elegant descriptive prose. Hard to believe it was written almost a hundred years ago.

My second novel (provisionally titled: Dead in the Water) is the sequel to Please Don’t Leave Me Here. It’s about the darkness that lies beneath the surface: a corpse found in the lake; a loving wife and mother with a shady past and unfulfilled desires; and a brave, in-control detective who is scared and losing control.

It’s more crime fiction than psychological thriller, although, like in PDLMH, the characters are more important than the crime. It’s set five years later, on an island in the middle of an inland lakes system where there is no way off after the last ferry leaves for the night. Brigitte and several of the original characters return.

Is Brigitte a loving wife and mother, or a cold-blooded killer?

Nobody knows why she was in the east of the city so early on the morning she was left for dead by a hit-and-run driver. It was the Friday before Christmas 1994 — the same day police discovered the body of a man beaten to death in her apartment.

Fourteen years later, Brigitte is married to the detective who investigated the murder, which she claims to have lost her memory of in the car accident. They have young twins, and seem to be a happy family. Until the reopening of the cold case.

A really excellent psychological thriller this – which has a lot going for it, the fact that it doesnt have the word Girl in the title, even though this is the story of a girl – and whether or not she is a killer – is just an aside that I thought I’d throw out there!

That’s not the reason it’s so good though,obviously. There is some really excellent writing here, beautiful descriptive prose that gets you right into the head of the main protagonist and a really really intriguing and enthralling story. Whilst there are two timelines to be had here as well, Tania Chandler has chosen to be a lot more straighforward about it, which really helped – and she brings a deep pyschological depth to all the characters that is definitely above and beyond a lot of the similar seeming tales around this year.

Whether or not Brigitte really is a killer or simply a victim that got away may be the anchor to the story as a whole, but this is not so much about THAT as it is about HER. Her life, the relationships she develops, her upbringing and attitude. I really found her to be intensely fascinating and she does have a very hard time of it and although it’s possible she once murdered somebody you will root for her all the way.

The resolution is not immediately obvious which is always a huge plus – and this is one of those novels where you are caught up in events from first page to last rather than hoppity skipping through to find out “whodunnit” – in a sense it doesnt really matter, for me this was more about how Brigitte would end up, whether she would face her inner demons and win or lose.

Overall really great stuff. And in answer to a question I saw on Twitter recently – is the Psychological thriller dead – my answer is a resounding NO. That genre lives and breathes in novels like this one.