Red Rising by Pierce Brown. Sometimes words are not enough. 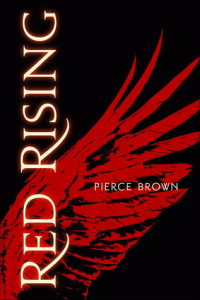 Thank you to the author and the publisher for the advance copy, although its also possible I want to throw shoes at you…

Darrow is a miner and a Red, a member of the lowest caste in the color-coded society of the future. Like his fellow Reds, he digs all day, believing that he and his people are making the surface of the planet livable for future generations. Darrow has never seen the sky. Yet he spends his life willingly, knowing that his blood and sweat will one day result in a better future for his children. But Darrow and his kind have been betrayed….

So. Where to start. Well I could say the whole thing is brilliant (which it is) but that probably does not cover it. I could say its absolutely addictive (also true) but that would not cover it either. Sigh. And of course I do not REALLY want to say much about the story as this is an insane ride of total reading joy…so perhaps I’ll just give you a little snippet but mostly talk about the experience of it rather than the nitty gritty.

One thing I want to get out of the way is the inevitable comparison to The Hunger Games that will occur (and indeed is it seems in the marketing of it). Before I read “Red Rising” that series of novels was perhaps amongst the best example of a Dystopian read aimed at the Young Adult audience that I had come across. And “Dystopian” is where the comparison stops for me. Red Rising is The Hunger Games on acid, a wonderful, heartfelt, enslaving rollercoaster ride of a novel, filled with rich language, a world beyond imagination, peppered with astonishing fascinating characters and best of all a truly magnificent main protagonist. Yes, Young Adults will love it. Pensioners will love it for that matter. As will everyone in between if this is the type of story they go for. And if you don’t normally read this genre and are looking at me as if I’ve gone slightly insane..then get a copy, read it, and come back to me afterwards. I think you will be surprised..

So what about what me? Well,  while reading the following things happened. I laughed. I cried. I cheered and I held my breath. I often threw it down in agony only to pick it up again seconds later to read another chunk..after the halfway mark I only allowed myself a bit at a time because I knew that I would be bereft once I was done…and yet still it drew me back in at every spare moment. I KNEW this book was going to be trouble when I spilt my drink yesterday and yelled “BloodyDamn” at it. Other reviewers who have already had this reading experience will know THAT feeling. There is a whole new language here and I seem to have been affected by it…

True love. True Loss. Adventure. Pain. Pleasure. Good versus Evil, one young man against an army…true David v Goliath stuff. And oh gosh, this is only the start. In terms of this being “Part One” the set up is truly extraordinary. I really would sell my soul to the devil to read part two RIGHT NOW! So if the Devil exists and he is watching….

So I havent told you much have I? Well. I didnt know much going in and that was the beauty, the fun, the sheer exhilarating genius of it. I feel like quoting Stephen King now so I leave you with this.

Go Then…There are other worlds than these.