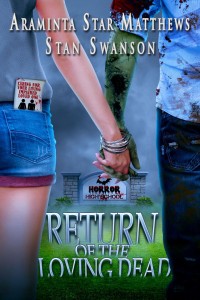 A Practitioner’s Guide to Resurrecting Your Best Friend’s Boyfriend

Okay, so Amber Vanderkamp isn’t always the best friend I want her to be. When I came out as bisexual, she made a few snide remarks about how I “can’t pick a team,” but I set her, ur, straight about that. When I change my hair color every week, sometimes she tells me I resemble one of those Troll dolls or a muppet from a public access station, or something. And when I pursue my dreams and learn Klingon or Elfish or take lessons in Wicca and spellcasting, she sometimes tells me I’m weird, but at the end of the day, she’s totally my sister, you know? She’s there for me, and I’m there for her no matter what. It’s just how it works. Sometimes your sister picks on you, but she’s still your sister, right? That’s how things are with me and Amber, without a doubt.

So when her boyfriend, the love of her life, Zach, got bitten by Donny Fenner and turned into a cast member of a Romero film, I was right there to hold her hair out of her face while she horked into a recycling bin in the hospital’s quarantine lobby. And when she decided to become his primary caretaker because his parents are self-absorbed enema nozzles who believe that Zach’s life is over now that’s he’s all living impaired–and, well, they’re kind of right– I was right there with Amber, injecting him with syringes full of Mortiphalin, feeding him raw hamburger on a stick (even though I’m totally vegetarian), and even teaching him to catch a Frisbee in the back yard.

And then I got the idea that maybe all my spellcasting work could really pay off. I started practicing on frogs from the science lab. I mean, I didn’t, like, Frankenstein frog parts from the biology frog morgue, or anything, but I may have had a few little twinges of success in those early experiments. After all, my love spell worked, and I am studying with some of the most powerful, world-wise witches from Romania, the owners of Ogham’s Obscurities. Why shouldn’t I be able to resurrect a Living Impaired Loved One?

Sure, my first few attempts weren’t met with standing ovations of success, or anything, but who’s to say it’s not just a long-lasting spell? Like, a time-release spell that will work in kind of spurts over the next, maybe, year or so? It’s not like the fire I set did any damage to his skin, or anything, even if his hair did smell like burnt sausage and wet dog for a week.

And besides, maybe I have some untapped potential, you know? Maybe, just maybe, my witchcraft powers are just waiting to reveal themselves to all my friends and fans. My time is coming. This story may be all about Amber, but I’ve got my own story, you know? She’s not the only one who gets to be the star on the center of the stage. I think I might be next, and then, who knows? Maybe I’ll cure this living impaired situation, and after that? Well, I’m sure there are other big bad monsters out there. Zombies turned out to be real. What else might be lurking in the shadows for us to find?

Being in love with a zombie bites, but that won’t stop true love. Horror High School: Return of the Loving Dead is like no zombie book you’ve ever read. Meet Amber Vanderkamp, senior at Stephen E. King High School. Amber is poised for class valedictorian when she graduates this year and has her sights set on the New York Center for the Performing Arts for college. Everything is wonderful in Amber’s world. She always gets the lead in her high school’s plays and is counting on the lead role in the school’s upcoming production of Romeo and Juliet to get a college scholarship for theater That is until her well-ordered world is thrown into chaos when her boyfriend, Zach Williams, dies and comes back as a zombie. But she simply can’t turn her back on the love of her life, can she? How does she deal with the pressure? And will she remain committed to the boy she once considered her soul mate and future husband? Especially when her mother (with secrets of her own) is encouraging her to wait and experience more of the world. And her flighty best friend, Jasmine, is acting even more peculiar ever since Zach has become a member of the undead club. Add in the class bullies, Caleb and Darla, who seem to be doing everything in their power to ruin Amber’s life and Zach’s existence, and all of the elements are present for a page-turning romp through a world where zombies, or “living impaired loved ones,” are a part of everyday life.

Araminta Star Matthews is an author, educator, and instructional designer in Central Maine. Born a ginger to a pair of geek parents (one, a lover of all things Stephen King, the other a tabletop gamer and Tolkein-fan), Araminta has always been a bit of an odd duck. Her books typically feature strong, young women who are brilliant, clever, funny, and weird.  Her books include Blind Hunger, Write of the Living Dead, Before Black Mask, Before Weird Tales, and The Warehouse. Her notable shorter works include “Bark of the Covenant,” in One Night Stands, “The All-Consuming Hunger of Love” in Dark Moon Digest, “Under My Skin” in Zombies Need Love, Too, and “Every Time a Bell Rings,” in Slices of Flesh.  She lives in Central Maine with her miraculous dogs, Devo the whippet and Crivens the Jack-Chi, and her partner, Abner Goodwin.

Stan Swanson is a Bram Stoker award finalist and author of eight books including Forever Zombie (a collection of short stories), Write of the Living Dead (a highly-praised writing guide written with Araminta Star Matthews and Rachel Lee) and Return of the Scream Queen (co-authored with Michael McCarty and Linnea Quigley). He is also editor/publisher for Dark Moon Books and Dark Moon Digest. Upcoming titles include Horror High School: Return of the Loving Dead (the first book in a young adult horror series co-written with Araminta Star Matthews), Dead Sparrows (a collection of apocalyptic poetry) and The Methlands (a horror novel co-written with award-winning author Joe McKinney).