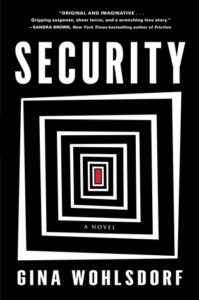 Today I am VERY happy to be interviewing Gina Wohlsdorf, author of “Security” about her novel – a book I really loved for its unique vibe and slasher movie sense. Details and review follow the interview.

Where did the original inspiration come from for “Security” ? It’s quite an original premise for a novel most specifically in the writing style.

I always wondered why John Carpenter’s Halloween didn’t exist in book form. I immediately thought of setting a slasher novel in a hotel, and I even drew a map. But that was just a premise. I didn’t have an approach, a voice – all things I need before I can start a book. So it sat in my idea folder for several years.

Then, in grad school, my professor assigned Jealousy by Alain Robbe-Grillet, a French realist from the fifties. It features a first-person narrator who never once uses the pronoun ‘I’. It blew my mind. That’s where I got the idea for the Head of Security, and I was off to the races.

I think I can guess that you are a bit of a slasher movie fan. I love them especially the old school Friday 13th movies. What is it about them do you think that make them so entertaining?

You are my hero. Friday the 13th Part 7 is my go-to sick-day movie.

Genre can be so formulaic, and the narrower the niche gets within a genre, the more rules and conventions there are to follow. Slasher movies’ content is all but dictated from the very beginning, and it fascinates me to see where a filmmaker finds ways to innovate.

The Friday franchise is all over the map, from the good (1, 2) to the so-so (3, 6) to the unbelievably wretched (5), but 7’s my favorite, because it actually pauses with each character and lets us know who they are. They all have a defined (albeit flat) identity. For example, there’s the “resident writer,” who obsesses about his short story rejections and is overall sexually unappealing. Hurts my feelings every time.

Plus, let’s face it, it’s pretty amazing that the ultimate conflict involves Jason sparring with a young woman who kicks his butt eight ways to Sunday using the power of her mind.

I think horror films are a place where we can confront our mortality in relative safety, and even find moments to laugh. Jason’s just so ridiculous by Part 9. By Part 4, really. There’s something magical about looking at a guy in a hockey mask who’s wielding a machete and saying, “Man, you gotta let it go. You had it rough as a kid, I get it, but you gotta let it go.”

In the novel you use a “split screen” approach for several scenes – what effect did you hope to achieve with this? I thought it worked extraordinarily well and added into the whole “movie in a book” feel..

The credit goes to a teacher here, too. Ann Beattie mentioned off-handedly in workshop that she’d read a novel where the page split. She thought it was interesting how it put the responsibility on the reader – deciding what to read first, where their larger interest lay.

On any other night at Manderley, Brian and Tessa’s reunion would be the most interesting thing happening in the hotel. Though, even then, it would have some competition – Franklin’s duplicity, Jules and Justin’s disintegrating marriage. Death is arresting, but so are our lives. Our everyday dramas, the things we call our best friend about at the end of the day so she can tell us we’re being (fill in the blank), what we should do is (x, y, z), keep that chin up and let’s get a pedicure on Saturday.

Could you tell us a little about what might be next for you in the writing stakes?

I’ve got a two-book deal with Algonquin, and I’m in revisions on the second novel now. It’s very different from Security. Still a thriller, but less a narrative puzzle and more (If you can believe it) voice-heavy.

Of course, after that, there’s always zombies . . .

Tell us about you in 5 easy soundbites…

* Tea Coffee or other – Both, and kombucha.

* Desert Island book – I want the truth to be The Divine Comedy. But the truth is It by Stephen King.

* One thing you’d like to be good at but are not – Dancing. I look like a muppet on methamphetamines.

* Author who gives you writers envy – Kazuo Ishiguro. He has patience and a gift with pacing and those are my Achilles heels.

Thank you so much — glad you liked the book.

The terrible truth about Manderley is that someone is always watching.

Manderley Resort is a gleaming, new twenty-story hotel on the California coast. It’s about to open its doors, and the world–at least those with the means to afford it–will be welcomed into a palace of opulence and unparalleled security. But someone is determined that Manderley will never open. The staff has no idea that their every move is being watched, and over the next twelve hours they will be killed off, one by one.

If you, like me, are a fan of the old school horror flicks, the Halloweens and Friday 13ths and similar then you will LOVE Security because really, its like one of those in a novel but with added character depth. The author stalks the reader while her characters are being stalked by a shadowy killer, shades of Christie with a dose of John Carpenter thrown in for good measure – very clever with some great set pieces and hold your breath moments.

The setting is pitch perfect, floor after floor of empty rooms – think The Overlook hotel minus the supernatural elements  – as our small and intricately drawn core character group prepare for a grand opening unaware that one by one they are dropping like flies. Gina Wohlsdorf keeps things off kilter and disturbing, not a whodunnit or a whydunnit but just simply the fact of it. A mysterious “other” figure hovers in the background and in the parts where she splits the action it is cleverly constructed and horrifically addictive.

Its always nice to find something different – thats what Security is – a different and fascinating way of telling a story, if you like your thrillers bloody but unbowed, scary but characterful then Security is for you.

Highly Recommended. Tip: Get a physical copy. For a start its a beautiful looking book and for another I don’t believe the story would work so well in e-book.

You can purchase Security HERE