September Highlights – The Dark Inside by Rod Reynolds. 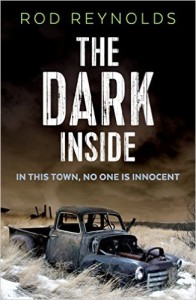 1946, Texarkana: a town on the border of Texas and Arkansas. Disgraced New York reporter Charlie Yates has been sent to cover the story of a spate of brutal murders – young couples who’ve been slaughtered at a local date spot. Charlie finds himself drawn into the case by the beautiful and fiery Lizzie, sister to one of the victims, Alice – the only person to have survived the attacks and seen the killer up close.
But Charlie has his own demons to fight, and as he starts to dig into the murders he discovers that the people of Texarkana have secrets that they want kept hidden at all costs. Before long, Charlie discovers that powerful forces might be protecting the killer, and as he investigates further his pursuit of the truth could cost him more than his job…

I loved this book so much. So very very much. Will that do? No? Jeez but you lot are demanding…

The Dark Inside is old school noir – Southern Noir at that – and I have not read a book like it in many years, and when I have they have come from old school crime writers who are almost a dying breed (think James Lee Burke or Flannery O Connor)  – but like Rod Reynolds here they have this magic touch when it comes to taking very little time to put you BAM heart and soul into another era.

Here we enter the Texas/Arkansas border in 1946 – alongside Charlie Yates, who having had somewhat of a meltdown in New York has been sent along to cover a series of murders in a small town – to the folks back in the big city very unimportant stuff. But to Charlie it’s about to become everything…

Language is a beautiful thing when in the right hands – it has the power to evoke all the  senses, to paint a picture, to bring on a memory, to make you catch your breath and feel an emotion – The Dark Inside has this in spades. Chocka block full of that sort of thing this book is, all the while telling a compelling and really powerful story that will envelop you in the pure texture and realism of that time now passed.

The author sends his main protagonist on a real journey of self discovery, sets him on a perilous path and takes us with him every step of the way – down into the seething whirlpool of fear that this small town has become in the wake of the deaths. The sheer atmosphere and sense of something horrific lurking just below the surface is palpable throughout the telling and as Charlie faces his demons and everyone else’s head on you will be utterly gripped and totally unable to look away. I was really quite tearful by the end simply down to the sheer impact of every single chapter.

This is a debut – something that stops me in my tracks every time I remember it – the writing is both visceral and gentle, a really quite staggering achievement both in character study and incorporation of setting – If Rod Reynolds spends the rest of his writing career (and boy is this guy going to have a career) creating books only half as good as this one, he will still be writing some of the top fiction out there. A truly incredible talent.

I don’t really need to add “Highly Recommended” do I? Not really. You can take that one as read. When I had finished The Dark Inside, devoured it over the course of one gloriously reading mad day, I had that spider sense that told me I’d just made a lifetime commitment. If this author keeps writing I’m going to keep reading. A bit like with Stephen King if he publishes his shopping list I’m probably going to get in the queue to take a look.

I guess you could say I’m a fan.  How many people will agree with me remains to be seen. But early buzz from people I respect in the field tells me I’m not going to be alone here – and as one reader to another I’m saying go take a look. Sometimes it really is that simple.

Rod will be answering some questions for me on the 9th September as part of the official blog tour. Until then….

2 Responses to September Highlights – The Dark Inside by Rod Reynolds.