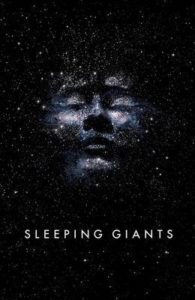 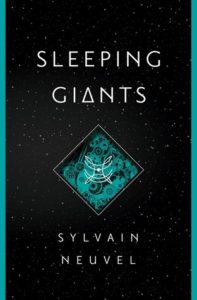 Sleeping Giants is one of my books of the year so far – almost guaranteed a place in my Top Ten on the 1st December, I was extremely happy to get the chance to interview the author – the insanely talented (if this is anything to go by) Sylvain Neuvel. Thanks so much to him for taking the time. My original review for Sleeping Giant can be found HERE and if you havent read this one yet you should. Probably the most fun you’ll have with a novel this year.

My love for Sleeping Giants knows no bounds (I have read it twice now) so I’d LOVE to hear a little bit about the inspiration behind the story, how it came to you? And about the decision to use the interview narrative that worked so beautifully…

Thank you so much! That means a lot. I wrote Sleeping Giants because of my son. He was about three back then, and I asked if he’d like me to build him a toy robot. I like to create physical objects from time to time and he loooves robots, so it seemed like a great idea. But instead of just saying yes, he started asking a bunch of questions. What kind of robot? What does it do? Where is it from? I needed a story before I built the toy. A few days later, we were watching Grendizer together (Goldorak in French, about a giant robot from outer-space, hugely popular when I was a kid) and I asked myself what it would be like if we found alien artefacts in real life. My first thought was that we wouldn’t know about it. Only a select few would have access to that information, but one way or another, that project would have to leave a paper trail. I knew right then I wanted to write that paper trail. I started Sleeping Giants the next day. I wrote a book for adults, but at its core, Sleeping Giants is really about a father building a toy for his son.

As for the format, I had written the prologue already when I started structuring the book. I write based on a few strong visuals and I could see that scene in my head so clearly. I knew the book was going to be epistolary, but I couldn’t decide who should be telling the story. I couldn’t pick a character, and switching point of view every chapter felt odd. More than anything, I really didn’t want anyone to “tell” the story. I wanted the characters to just live their life during these extraordinary events and for us to witness it. I wanted the readers to participate, to figure things out on their own. Then I thought of the interviewer and it all came together.

The shadowy figure working behind the scenes ironically quipped his way straight into my heart – as a general challenge though, how easy is it to flesh out the characters when the only basis the reader has for them is through questions and answers?

We figure people out based on dialogue all the time. We do it when we watch movies. We do it in real life. It’s a challenge to write, but it’s a lot of fun. It’s fairly easy to get the plot moving, but when it comes to revealing the character’s inner life, what they’re saying doesn’t matter that much. It’s all about how they say it, what they won’t say, etc. The real question is really how much trust to put in the reader. Take the interviewer, for example. I think he’s a wonderfully complex character, but you have to figure him out on your own, because he won’t tell you a single thing about himself. I think there’s something uniquely rewarding about that. I trust you the same way I like to be trusted as a reader.

Let’s talk gorgeous geekery – the scientific elements in Sleeping Giants are very accessible, a mixture of fact and presumably dramatic license – how much fun was that? The novel felt like it must have been a joy to write but also needing some reasonable level of research to keep it feeling real.

Oh, there was nothing reasonable about it. I put more research into Sleeping Giants than into my Ph.D. I like to ground fiction in as much fact as possible, so I try to make sure the science holds water. That part will show if anyone knows about it or takes the time to look, but a lot of the research I did will go completely unnoticed. When Kara flies her helicopter into Syria, she’s not flying anywhere. I spent days mapping out her route, making sure the terrain on her path was level enough for a low-altitude flight. Of course, she never talks about that in the book, but I know. When she crashes into a pistachio field, I can show you which one on satellite view. It’s a gorgeous little patch of perfectly lined up bushes in the middle of nothing. I looked at reviews of the restaurants where the characters eat to make sure they picked something good from the menu. I know that no one would care if I didn’t, but I feel better about writing it if I know it’s true. I hope it transpires on the page.

Two strong women in this – Rose and Kara, both of whom I got on with. Kara especially appealed it has to be said, but both are extraordinary, any real life people inspiring you there? How did they come into focus and how did you see their relationship?

I was born in 1973, so I was raised with strong and smart women characters, mostly in sci-fi: Helen Ripley, Sarah Connor, Leeloo, Ellie in Contact, etc. I didn’t have to think about Rose. I knew who she was when I started. There’s a bit of Ellie and Helen Ripley in Rose now that I think about it. Obviously, her last name is an homage to real-life chemist and biologist Rosalind Franklin, but by all accounts, Rosalind was much more direct, decisive than Rose. She had more in common with Kara in terms of personality. Kara’s last name is a tribute to astronaut Judith Resnik, who died in the Challenger incident. I love writing Kara. She comes out very naturally. Rose too, but she’s a scientist, so she usually means research. Their relationship is really interesting to me. They never talk much about it, but they are extremely important to one another. They’re very different, but they need and complement each other, in a Thelma & Louise sort of way.

I have to ask about our enigmatic interviewer and how he developed – because one of the things I loved about this was how they started in one place and ended in another. Unknowable at first but a real feel by the end. I’m fairly sure he is watching me…he’s not watching me right? **Glances around nervously**

You have my word that he’s not watching you right now. Other people do that for him. Love the interviewer, and I too was impressed with his great master plan. I feel really close to the guy because he’s pretty much always there. Whatever character I’m writing, I’m also writing him at the same time. Everyone assumes that Vincent resembles me the most because we share some background, but the interviewer is the one I feel closest to. I’m not sure that’s a good thing.

This is book one – and we’ll have words another time about putting that ending in there without providing me with book two first hmm – are you allowed to give any hints, even enigmatic ones, about anything at all that might be coming? I need to make plans for levels of caffeine and chocolate in my house…

Well, I’ll tell you that the stakes are much higher in Waking Gods, for everyone. (I suppose I could have started by telling you it’s called Waking Gods.) There are some answers in book II, hopefully some interesting new questions as well. Oh, and there’s a bit about a squirrel named Little Larry.

Thank you SO much for the replica robot hand I love it so much (and I really want a GIANT robot for Christmas it is on my list) –who came up with that idea? You are obviously creative in more ways than one, tell us a little about yourself generally speaking, background and life inspirations?

You are very welcome. Those were really fun to make. What can I tell you? I’m a high-school dropout with a Ph.D. I’m a geek. I love toys. I spend an inordinate amount of time making Halloween costumes and building useless things. I’ve had just about every job you can imagine. I’m not sure that qualifies as a background. When I was about twenty years old, I made a list of things I wanted to accomplish in life. It was a short list. There were only three things on it. Get a degree. Have children. Go to space. I’m two for three. 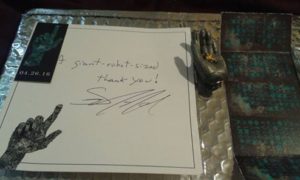 I’m really grateful you agreed to this interview, Sleeping Giants was the best fun I’ve had with a book in forever – just to finish, do you have a book you might like to recommend? One that you had fun reading? Or several even?

I’m in the middle of Morning Star by Pierce Brown right now and I can’t recommend it enough (the half I read, anyway). I love Pierce Brown’s writing. It’s so different from mine. I’m a horrible person to watch a movie with, or to discuss a book you haven’t finished, because I usually know what will happen next. I don’t with him. That’s one of the reasons I got hooked on Red Rising. Strangely, I’ve only read good books lately. Quantum Night, by Robert Sawyer. The Flicker Men, by Ted Kosmatka. Two completely different books with a somewhat similar premise. Lots of science.

Thank you SO SO Much!

Thank YOU! That was fun!

You can purchase Sleeping Giants by clickety clicking right HERE