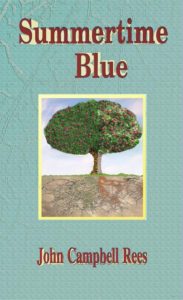 To celebrate the release of Summertime Blue I’m happy to welcome John Campbell Rees to the blog talking about inspiration.

Inspiration was not a problem when I was writing Summertime Blue. I had always wanted to be an author and in 2013, I published my first novel, Winter Squad. I knew the end of that novel was not the end of the story. I had cut the last three chapters from the final draft of Winter Squad because I realised I had written beyond the end of that novel and started writing the sequel. However in the final version, these three chapters ended up in a different order in different parts of the book. The only one to survive virtually unscathed was the description of Nevamarsya, the novel’s main character wandering around the Central Atrium park down in the Roots.

Both books share a common background based on two facts. First was the old Wakes Week in the North of England and the Miners’ Fortnight in South Wales, when the main source of employment was closed for essential maintenance so the population of the entire town would go away to the local holiday resort. Second was a trip to Porthcawl in South Wales, when I saw all the amusements closed and boarded up, I started wondering what it would be like to be amongst the people who stayed in town to do the maintenance during Wakes Week or lived in the seaside town during the off-season. I then linked that to the way deciduous trees shut down for half the year, which combined with the Science Fiction meme of multiple universes.

Motivation was also not a problem because I have always wanted to be an author and having finally found my voice I wanted to continue. The first draft was a whopping 50,000 words and contained most of the key events but lacked a linking narrative, I only had a vague idea about political conspiracies. Try as I might, I could not think of a good reason for the characters behaving as they do.

So, I moved the novel, then entitled Summer Homes onto the back ring of the ideas cooker and did some sketching, trying to draw a group photograph of the Winter Squad taken on the first day of their Tour of Duty. As well as the main named characters all the minor named and unnamed characters. All this time stories ideas were bubbling away in my subconscious until they reached a critical mass.

Surprisingly, the first thing I did was cut a whole sub-plot and simplify another. Then I started writing the Court Martial. Poor old Serynazsya, Nevamarsya’s older sister and calamity magnet from Winter Squad drew the short straw again, as what happened to her at the start of Winter Squad would have to have consequences in Summertime Blue. The structure of the Court Martial was inspired by Rugby League, where the team that has the ball has to hand it over to the opposition after the ball carrier has been tackled five times without losing the ball. This beca,e the four questions in a row that one of the lawyers can ask. In Rugby League, the opposition then has the ball until they have been tackled five times, which translates into the other lawyers four questions. Of course, in the game team with the ball could lose it in a pass before the five tackles, and the opposition then has control of the game. This translated into the trial being carried out at breakneck speed, with both lawyers having to be in full control of the facts. Either lawyer pausing to refer to their notes is like dropping the ball.

Finally, I added the search for Gaemlovant, which meant putting old Tabbernant in the Brig and explaining why he needed the recluse to help get him out.

So, everything tied into one of the sub-arcs and they then connected into the main conspiracy arc. Except the ending was a bit flat. Having mentioned a wedding earlier, and knowing that a fashion show always ends with a wedding dress, I decided to write Kanonypsya and Keltonant’s marriage ceremony as as comic relief, I found it quite amusing.

You can purchase Summertime Blue HERE