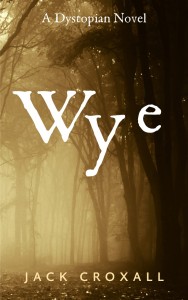 So a little while ago when Wye by Jack Croxall was released, as part of the blog tour I arranged for lovely Zoe Markham to have a chat  with him all about it and they had a lovely  time comparing notes – Zoe’s “White Lies” has just been released so I thought hey why not turn the tables – so Jack has had a bit of fun asking her some questions all about White Lies – and here is the result. Thank you both of you!

Schools and school life are an important part of both Under My Skin and White Lies. What makes a school such an effective literary setting?

With YA you often hear the “Get rid of the parents!” line. School tends to work really well in this respect because, whether you chose to get rid of the parents or not, it’s one of those environments where it’s all down to you: parents or no parents, from 9am to 3pm you’re on your own. And of course it’s an environment that’s familiar to all of us, whether we like it or not 😉

When you started writing White Lies did you already have the twist in mind, or did it (or maybe several different versions of it) occur to you as you went along?

I did always have the twist in mind, but it became one of those areas in which I really had to compromise, because my editor didn’t like the feel of the ending in my first draft. In the end, it went through, I think, three different variations before we found one that worked for both of us. My initial twist, and the one I was rubbing my hands with glee over when I wrote it, all came down to who was driving the car at the end…

I loved the character of Scarlet, she’s so intriguing, so well-written. Have you ever known someone like her in real life?

I went to school with an ‘almost’ Scarlett, which is where she initially came from. She started out as just a very controlling ‘Queen Bee’ figure – the classic ‘Mean Girl’ really, but again as the initial draft was edited there was a concern that she was perhaps verging on stereotypical. It was great editorial advice as it gave me the chance to think about why Scarlett acted the way she did, and it brought her background and her own story to light. It made her heaps more fun to write – and it’s why editors are brilliant J

How did you get the idea to incorporate a magpie into the story?

I really liked the idea that Abby, never quite making it as one of the ‘cool crowd’, didn’t score the big, dark, brooding raven she’s familiar with from the books she reads. A magpie felt a bit more urban, and a little quirkier – maybe even more British somehow, although I have no idea why. There’s the whole ‘One for sorrow’ aspect, which I thought went well with her character, and I remembered reading somewhere, years ago, about the whole ‘devil’s blood under their tongue’ thing, which I thought was nicely creepy. I’m all for creepy!

As a reader, what kind of story scares you most?

The ones rooted so firmly in everyday experience that they could, potentially, happen to anyone. Ones where you get the ‘That could be me’ paranoia creeping in around the edges as you read.

How have you found the experience of having your stories, your characters and what might be considered an intimate part of yourself out in the world?

Honestly? Terrifying! I’ve been massively, massively fortunate in finding people who’ve connected with both novels and been absolutely lovely about them – but there’s still part of me that seems to always be hiding in the corner, trembling. I tell myself it’s because I care about what I write, and want to get it right, but I also have to admit to the fact that I’m just a giant wimp, in general. I’ve never been the most confident of souls, and I find release days hard. I’m really going to have to try and get over that somehow!

Is there a genre you’d love to write in but haven’t yet had the chance to? Or perhaps one you never would write in?

I would love to write Epic Fantasy, it’s my favourite genre to read and I’ve been sort of plotting ideas of my own on and off for about two decades now. The world-building becomes so complex and immersive in my head though that I have the feeling I’d only ever be able to write Epic at a time when the day-job wasn’t a necessity!

What’s next for you?

This year I’m really lucky to have two more YA titles coming out, Blood Bank with Kristell Ink, and Headcase with Tenebris. They’re both very different to my Carina titles. Blood Bank is a vampire novel (these aren’t just any vampires, there are SWINDON vampires!) and Headcase is a deeper and darker journey into teenage mental health, with a bit of a fantasy twist.

Neither of them feature schools, promise! J

Thank you SO much the pair of you!

Wye is losing hope. Sixteen and travelling through a rich wilderness with three other teenagers, she should be having the time of her life. And she might be if it weren’t for the thing hunting her; the tireless creature desperate to tear her and her friends limb from limb.

Through the remembered lessons of her favourite writers, Wye has been trying to make sense of the cruel world she’s found herself inhabiting. But it’s not working. Wherever she turns there are monsters and memories, both of them poised to devour her if she can’t find a way to live with herself. What follows is Wye’s last chance at salvation, what follows is her journal.

You can purchase Wye here

For Abigail, a new school could be the fresh start she so desperately needs. With her parents in the army and her sister Beth too far away to run to, she knows this year needs to be different. She’s never been part of the cool crowd and for the first time Abby wants to fit in. And all it takes is just one little white lie…because some truths are too painful to share.

But at Cotswold Community College, Abby isn’t the only one with a past she’d rather forget. And when she stumbles across a closely-guarded secret, Abigail realises that her one little white lie could reveal everything she’s worked so hard to hide…

You can purchase White Lies here