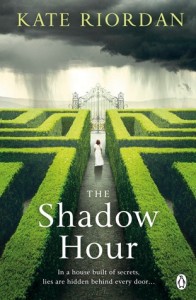 Having loved Kate Riordan’s last novel, The Girl in the Photograph, I was VERY excited to read The Shadow Hour (review to follow) and I’m delighted to welcome Kate back to the blog to tell me a little about it.

I loved hearing all about how Owlpen Manor featured in “The Girl in the Photograph” – tell us a little about the inspiration behind “The Shadow Hour”?

In terms of setting, I’ve been inspired by my home county of Gloucestershire all over again. This time, the book is set atop a hill on the outskirts of Cheltenham, where I lived for seven years before moving to the countryside last year. Fenix House is based loosely on a private house I caught a glimpse of when I was walking one day. Now, if I ever pass it in the car, it’s odd to remember that my characters aren’t actually inside.

Aside from setting, I was also inspired by books like Jane Eyre to write about governesses – and that was my starting point for this book, well before I had found the house above, or had any notion of the plot. I’ve always been fascinated by governesses in literature, and they make the perfect heroine for a novel with the sort of gothic touches I like because they were so isolated in Victorian society. As young women from respectable families without much money (generally), they occupied a peculiar sort of limbo, neither above nor below stairs. That made them very lonely, vulnerable and strangely invisible. Of course, all that makes them very interesting to write about!

One thing that struck me about The Shadow Hour was the total atmospheric sense you captured of the times once more – Is that quite difficult to achieve or does it come easy? You must have a love of history somewhere inside…

Thank you. And yes, I do so love all things old! The past is endlessly exotic and alluring to me and I love imagining myself into it. I actually found Harriet’s strand of the story, set in the 1870s, easier to write than her granddaughter Grace’s in the 1920s. I think that’s because I’ve read so many nineteenth century novels over the years and so I can just sort of switch into that more formal style without really thinking about it. The 1920s was trickier because it’s still almost a century ago, and yet I wanted it to feel different. Things were never the same after the First World War and the early twenties were a curious blend of despondency and optimism. I think conveying those general moods is just as important as getting the type of gas lamp right. More, actually.

Talk about the characters – before it started coming together who was foremost in the mind. Grace or Harriet? Or were they both hovering there…

Well, at first it was just a nameless governess who was hovering. The classic governess is Victorian to me, though, so Harriet was the first to reveal herself to me. She’s in a horrible position when we meet her as a young woman. Her father has died and there is no money and virtually no other family. She has little choice but to earn her living and, as a respectable woman, becoming a governess is one of very few options open to her. I liked her and admired her bravery immediately so she was a pleasure to write. After her, came the three children who live at Fenix House when she’s governess there. I knew I wanted to take at least a couple of them through to the 1920s, when they would be in their fifties, so I enjoyed developing them into adults who had been shaped by what happened to them. Real people evolve and change over the years according to what happens to them and so I knew I didn’t want them to simply turn into older versions of their childhood selves.

Both novels have a time shift element – do you enjoy novels with this aspect yourself?

I do, although that’s got less to do with a particular liking for time shift per se, and more to do with liking stories that stretch over several generations. Perhaps I’ll write a proper, full-on family saga one day! This is partly why both of my novels (and the one I’m currently writing) are set fully in the past. In dual narrative stories with one strand in the present, I find I’m more likely rush through that bit to get back to the past. As a result, I decided I wanted both halves of my stories to have that historical escapism. It also frees you up to go further back in time and still have characters who can realistically appear in both times. It’s those unifying characters who knit the strands together and make it one story.

Having said all that, I would like to write a contemporary novel one day – or one set in the near-past anyway. It seems very appealing on those days when you’ve got to try and look up what kind of Victorian carriage someone might have used!

Finally tell us a little more about you – when not writing or researching what do you enjoy doing? And more importantly are you a tea or coffee person?

Definitely coffee. I have one espresso in the morning and that lasts me all day. Sometimes even that stops me sleeping so I have to go easy on the caffeine. I don’t really get the tea thing, I’m afraid. I’ve probably had twenty cups in my whole life.

When I’m not writing, I’m usually reading. I always have a book on the go and feel like I’m missing something if I haven’t. A huge pleasure for me is deciding which five or six books to take on holiday to read by the pool and then just working through them in between swims. I’m a rubbish tourist in terms of museums and general sightseeing – I like to just ‘be’ when I’m away, sitting in a café with a cold glass of wine, people-watching and making up stories about them.

At home, my days are pretty low-key. I write, feel guilty for not writing, and walk the dogs. They’re both rescues – a Staffie who was abandoned and a Westie from a puppy farm who was so tiny no one bought her. They’re both really eccentric with their own funny habits and I love that. I always desperately wanted a dog as a child but my parents worked full-time. Being able to have them now is surely one of the top perks of being a writer! On summer evenings, my husband and I often take them along the river to the pub and for a drink or dinner. We’re lucky in the Cotswolds – there are so many good foodie pubs.

And what does the future hold?

I’m currently writing my next book for Penguin. Set in the summer of 1940, it’s my most modern yet – as well as having the narrowest time frame. It’s not dual narrative either, though it hasn’t felt like that much of a departure because it’s still written from various different characters’ perspectives and occasionally goes back into their pasts.

Nineteen twenty-two. Grace has been sent to the stately and crumbling Fenix House to follow in her grandmother’s footsteps as a governess. But when she meets the house’s inhabitants, people who she had only previously heard of in stories, the cracks in her grandmother’s tale begin to show. Secrets appear to live in the house’s very walls and everybody is resolutely protecting their own.

Why has she been sent here? Why did her grandmother leave after just one summer? And as the past collides with the present, can Grace unravel these secrets and discover who her grandmother, and who she, really is?

The Shadow Hour is really quite wonderful, atmospheric, beautifully written and with some gorgeously drawn characters that will stay with you long after reading.

I do love a past/present vibe in a novel especially when done really well as it is here – the yin and the yang of Grace and Harriet as they face their particular issues, I was particularly drawn to Grace as she went on a journey of discovery, finding out the truth in her family history.

Descriptively speaking this is lovely, Kate Riordan manages to once again capture a sense of the time and place about which she is writing and give a real feel for the places where her characters live and breathe. You are drawn in and held there, as the story unfolds, a beautiful literary touch within a novel that is quite the page turner.

I loved it again. I think I’m a Kate Riordan superfan. Really looking forward to what she gives us next.