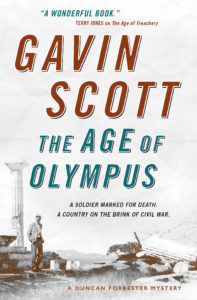 Today I am very pleased to offer an extract from The Age of Olympus written by Gavin Scott and published by Titan Books on 28th April. Details follow the extract.

The Age of Olympus – Extract.

“So the Iron Curtain could fall over Greece too?” said Sophie.

“It could indeed,” said Lancaster, and fixed his pop-eyed gaze on Forrester. “And that’s where your old friend General Alexandros comes into it. We’re a bit worried about him.”

“He’s not a communist,” said Forrester. “I know that for a fact.”

After the Germans invaded Greece in 1941, Forrester and Aristotle Alexandros had spent weeks together, planning guerrilla operations while hiding out in a cave near Mount Olympus, and they had talked about every subject under the sun, including the Soviet Union. “He’s the most rational man I’ve ever met. One of the best read, too. He saw through Marx as a teenager.”

“But after you parted he spent the rest of the war fighting the Nazis alongside the communists,” said Lancaster, “and that makes him a suspect now as far as the Greek Army is concerned. They’re all royalists, you know.”

“But he’s the best strategist in Greece,” said Forrester. “Best tactician too. Don’t tell me the regular army’s put him on ice.”

“That’s exactly what they’ve done,” said Lancaster. “And he’s getting bored and impatient. The communists want to put him in charge of ELAS.”

“But surely he wouldn’t—”

“The present regime’s pretty rotten. Too many people who cosied up to the Germans. He might think he could use ELAS to take over, clean house and start again with a fresh slate.”

Forrester was silent for a moment. It was all too plausible. And if Aristotle Alexandros joined the communist army, they would win. Stalin’s campaign to control Europe would be one step closer to fulfilment.

“Just talk to Alexandros, find out what you can about his thinking. Then let us know.”

“I’m very fond of him,” said Forrester. “I’m not going to sell him down the river.”

“Wouldn’t dream of asking you to, old boy,” said the attaché. “Just sound him out about whether he’s going to join ELAS, that’s all.”

“If we come across each other.”

“Oh, you’ll come across each other,” said Lancaster. “This is Greece. Besides, there’s a party tonight at the Regent- Archbishop’s, and I’ve wangled you both an invitation.”

“I had hoped to have a quiet dinner with Sophie,” said Forrester.

“I know,” said Lancaster, with patently insincere sympathy, “but I also know we can rely on you to be a good scout, old man. They speak very highly of you at the War Office, and the same can’t be said for most academics, I can tell you.”

Purchase The Age of Olympus