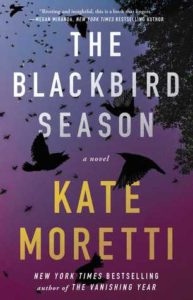 Today I am VERY happy to welcome Kate Moretti, author of the brilliant “The Blackbird Season” to talk a little about the book as part of the blog tour.

This was originally supposed to be a full review also, however I am currently dealing with some real life  and am officially On Hiatus – so there will be a separate post with a full review upon my return. But what I will say right now is you do NOT want to miss this one – it was entirely emotionally brilliant.

First of all, I want to say The Blackbird Season was a wonderful read for me, so compelling I read it almost without stopping. I know you probably get the inspiration question too much but I am intrigued to know where the Blackbirds came from – an underlying theme in the story and an event within it that drives it.

Thank you so much! I love when a reviewer really gets what I tried to do — it’s like a writer’s dream come true. I’ve always been fascinated by natural phenomenon: birds falling, a mass fish death, I once read a story about a river in China that turned completely red overnight and it took them forever to figure out why. Something about the iron content of an opened dam. Either way, it was all fascinating. Most of my inspiration comes from news articles. I’m a junkie! I read a story about a teacher who followed all his students on social media and I thought about how polarizing it must be now. How easy it would be to cross those lines, with good intentions! But then how easy would it become for someone to subconsciously use their students to fill a hole in their own lives. How accessible everyone is. That’s my favorite part of writing stories: exploring those morally gray areas that can ensnare even the most well- intentioned people.

You take a pretty relentlessly emotive look at the underlying soul of small towns everywhere, where everyone knows everyone and all have an opinion to share – is this a theme that particularly interests you generally when writing a novel?

Yes. I love setting. I grew up in a very small town. While we never had a booming local economy in my lifetime, I am interested in what the exodus of manufacturing from the US has done to areas like the rust belt. While Blackbird takes place in PA, not in the geographical midwest, the economics was similar. A dwindling population, deindustrialization, rural decay, rampant heroin use. In northern Pennsylvania, there are thick, dense woods that even an avid hiker could get turned around it. The combination of these two settings felt so interesting to me. The book I wrote before and after Blackbird are different urban settings: NYC and Philadelphia, so it was fun to write the special kind of hell that can be country life.

It is quite difficult these day, I imagine, to stand out in this genre – call it what you will, psychological thriller, domestic noir, or to my mind just taking human nature and spinning it in different ways – what authors have inspired you to write and how do you go about plotting a book and trying to make it unique?

THANK YOU. It’s just human nature, spun different ways, with a murder mixed in. I have no idea what my technical genre is. I like the ultimate stakes: life or death. I like families and the myriad of ways we can ruin each other and ourselves. This is where my fascination lies. No idea if this is psychological suspense or mystery or noir or whatever you want to call it!

I plot a book somewhat haphazardly. Generally, the opening chapter comes to me immediately. Sometimes I can get to the ending. The middle is always murky and sometimes I loosely outline and say

It’s so hard to stand out! I think it’s likely that all of us suspense writers fret about this kind of thing. For me, it’s such a driving force. How can I take something that interests me, make it universally appealing, and still write something that sets it apart? I have a zillion authors that inspire me constantly! Megan Abbott has been a huge influence: I love how she can really drill down to the nuts and bolts of family life and make it so incredibly fraught with tension. I read Elizabeth Haynes and I swear to God, I don’t breathe. Her plots are hairpin! Tana French can build a world and a set of characters that I cannot believe don’t really exist. Peter Swanson gave the word “twist” new meaning in THE KIND WORTH KILLING. Liane Moriarty’s characters are so accessible — she brings the reader right into their head. Whenever I need to understand how to do this or that better, I turn to these masters. I’m always learning.

I was highly intrigued by Nate Winters – a character who could just as easily be hero or villain during the reading – he has a kind of passive aggressive likability that makes you want to trust him – also the layer of storytelling that deals with the teacher/student relationship and where the line needs to be drawn is utterly thought provoking – where do you see that line and how did you ultimately view Nate?

This is my FAVORITE QUESTION. I’ve known a lot of guys like Nate Winters. Self-described “nice guys”, the heroes of their own story. They are likable, sometimes. They’re also, as a group (I’m generalizing), incredibly narcissistic. Nate, like everyone else, felt complicated to me. He wanted his life to be easy. He wanted everyone to like him. He could handle his son’s disability just fine by pretending it didn’t really exist. He wanted Alecia to let him off the hook, to let him have his free and happy life, half checked out. Then again, he genuinely wanted to help his troubled student. Or was it another way to play the hero? I’ve never trusted a man who tells me he’s a “nice guy”. Who are they trying to convince? I loved exploring this and I can’t say I like Nate much, but I don’t think he’s a villain per se. I think he crossed the line a long time ago by following his students on social media. There’s definitely a savior complex there.

Finally a question I ask everyone – is there one novel you have read this year that you would like to recommend to everyone?

Do I have to pick just one? THE PERFECT STRANGER by Megan Miranda, EVERYTHING I NEVER TOLD YOU by Celeste Ng, THE FIFTH OF JULY by Kelly Simmons, ALL THE BEST PEOPLE by Sonja Yoerg. It’s a 4-way tie.

“Where did they come from? Why did they fall? The question would be asked a thousand times…

Until, of course, more important question arose, at which time everyone promptly forgot that a thousand birds fell on the town of Mount Oanoke at all.”

In a quiet Pennsylvania town, a thousand dead starlings fall onto a high school baseball field, unleashing a horrifying and unexpected chain of events that will rock the close-knit community.

Beloved baseball coach and teacher Nate Winters and his wife, Alicia, are well respected throughout town. That is, until one of the many reporters investigating the bizarre bird phenomenon catches Nate embracing a wayward student, Lucia Hamm, in front of a sleazy motel. Lucia soon buoys the scandal by claiming that she and Nate are engaged in an affair, throwing the town into an uproar…and leaving Alicia to wonder if her husband has a second life.

And when Lucia suddenly disappears, the police only to have one suspect: Nate. 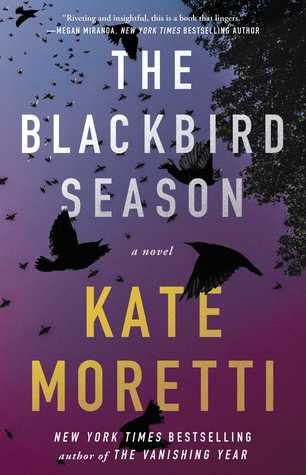 One Response to The Blackbird Season: Interview with Kate Moretti