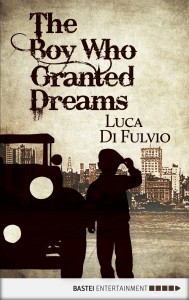 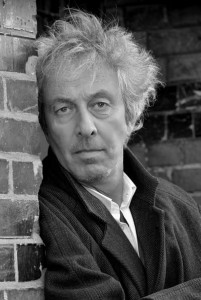 Today a guest post from Luca Di Fulvio – welcome Luca and thank you!

It’s completely natural for Italians to think of emigration as part of their DNA, as integral as art, music and sunshine. Even for those of us whose relatives did not emigrate. It’s part of our national experience (even if, now that it’s our turn to accommodate all those coming from Africa or Eastern Europe in search of a better life, we sometimes seem to forget this).

For this reason, I didn’t have too much trouble putting myself in the shoes of Cetta, the mother of the protagonist of my novel, who leaves a shady part of Calabria for New York.

Almost all of our migrants, especially at the beginning of the last century, came from the south of Italy (and consequently they shape the popular view of all Italians), having been forced by hunger and social injustice to go in search of a new world and a new life. They were poor, often illiterate, struggling even to speak Italian. The modern world they found in America, and particularly in New York, must have been totally overwhelming. It has always seemed to me that the thuggish behaviour that made us notorious was a front concealing a huge amount of fear. And I think our national tendency to seal ourselves off in tight little groups began as a kind of remedy to that, a way to share that terrible fear among the community. These people’s nostalgia for their homeland (by which they meant not Italy but the little region they came from and the incomprehensible dialect they spoke), and for the roots they had been wrenched from, were simply a balm for the deep sense of not belonging they must have felt. I remember a friend of mine telling me about her grandmother who, twenty years after moving to France, had barely mastered the basic vocabulary needed to do the shopping.

But there was another type of emigrant, the adventurers who threw themselves into the melting pot, back when that concept was still in fashion. Who grasped and believed in the extraordinary opportunities the Promised Land had to offer.

Cetta belongs to this second category. But she keeps her wits about her. She is smart enough to realise that for her there can be nothing more than the ‘salad bowl’ on which American culture would fall back years later. But she has the foresight to invest all her hopes and dreams in a different future for her son, a future in which the mythical ‘melting pot’ could become a reality. As far as Cetta is concerned, this child, who set off for America with the Italian name Natale, but at Ellis Island had it translated to Christmas by a fledgling interpreter named Fiorello LaGuardia, can and must have what she will never attain. Christmas will be American. He will integrate.

People immediately tell her that Christmas is a negro name. But Cetta asks who the negroes are: ‘Are they Americans?’ And when told there’s no denying they’re American, she happily and proudly states, ‘Then my son has a new American name.’

Cetta, who has escaped from a quasi-medieval fiefdom whose padrone molests his female subjects, has no choice at the beginning but to work as a prostitute. But there is something spurring her on to succeed, to reach her aims. Maybe she wouldn’t have had the strength to succeed for herself (even though she is an amazing woman and I think she would always have gone far), but for her son, who is her future, she finds all the determination she needs to fulfil her ambitions.

Christmas is an extraordinary peddler of dreams, a giver of hope, and not only to the people of the Lower East Side ghetto; but there’s no doubt he gets this talent from Cetta, and the way she brought him up.

I tried to paint a picture of a girl (when she arrives in New York she is only a teenager) with a gift for lightness. The cruel, terrible world she encounters seems to leave her unscathed. The mud the other down-and-outs fling at one another seems to wash right off her. Sal himself, who will become her faithful companion, is none other than a pimp. A man who, in common with so many others like him in that era, chose to take the shortcut of criminality. And yet even he, under Cetta’s influence, will display a better side to himself, a side every one of us has.

It sounds like a fairytale, I know. But I firmly believe in human nature, despite everything going on around us. I have an unshakeable faith in the human being’s capacity to choose the right path and, with the help of circumstances, to open the door to a better world.

And in this story, Cetta is the character who shows others the way. With natural ease. With lightness, as I said before. Without airs and graces.

When Christmas was little, he and Cetta “would sit on a bench in Battery Park, next to one another, and Christmas would read aloud to her — first sounding out each syllable with difficulty, then more and more smoothly as he went on — the adventures of White Fang. One page a day.

“This our story,” Cetta told him the day they finished the book, almost a year later. “When we come here to New York, we like White Fang, like wolves. We strong and we wild. And we meet bad people who make us more wild, savage. And they kill us if we let them, eh? But we not just wild. We strong, too. Always you remember that, Christmas. And when we meet good person, or if we have some good luck, then our strength make us like White Fang. Americans. No more wild. That what book mean.”

“I like the wolves better than the dogs,” said Christmas.

Cetta stroked his fair hair. “You a wolf, my baby. And wolf inside you make you strong, more strong, when you big. But like White Fang, you listen when you hear voice of love. If you no pay attention when you hear, then you get like all those bad boys in neighborhood, those delinquenti, they not wild wolf, they mad dogs.”

The Boy Who Granted Dreams by Luca Di Fulvio is published 23rd March by Bastei Entertainment, price £4.99 in eBook

1909. Ellis Island. Arriving off one of the many transatlantic freighters are Cetta Luminita and her illegitimate baby boy Natale, fleeing the poverty and violence of their Southern Italian hometown. Having sacrificed everything, and endured every possible shame, Cetta has but one wish: that her baby should be an American, and grow up with the freedom to decide his own destiny. As they alight, US Immigration officials give Natale a new name: Christmas.

Growing up in the Lower East Side of New York with his mother, who works as a prostitute, Christmas is determined to be a success, whether a decent person or a gangster. The city is ruled by gangs from each community, Italian, Jewish and Irish, and survival is dependent on ruthlessness and strength. But Christmas has a vivid imagination, and an ability to tell stories that people want to believe…and thus is born his imaginary gang, the Diamond Dogs, which earns him respect within the ghetto. All this changes the day he saves the life of a rich Jewish girl Ruth, and despite their different backgrounds, he falls hopelessly in love with her. When circumstance tears them apart, Christmas vows that he will find her, by any means possible.

A sweeping saga of love and hate set in the Roaring Twenties, The Boy Who Granted Dreams is the story of Christmas and Ruth; the story of the dawn of radio, Broadway and Hollywood; and above all, a story about believing in the power of dreams. 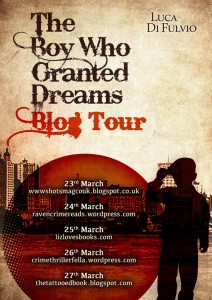