The Canary Girls by Rosie Archer – Extract and Giveaway. 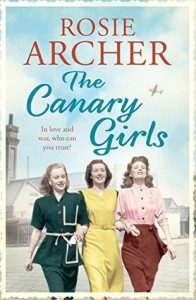 I’m very pleased today to host an extract from “The Canary Girls” and offer one UK Reader the chance to have their very own copy – simply by commenting on this post  or by shouting at me on Twitter ( @Lizzy11268 ) to say you’d like to go into the proverbial hat!

In love and war, who can you trust?

Her face still bearing the scars from the explosion at the factory, Rita Brown is nonetheless back on her feet. She’s caught the eye of local wide boy Blackie Bristow, who’s sweeping her around the country in a life of shady glamour.

But there’s a war on, and life is not all fun and games. Some of the local men are taking advantage of the topsy-turvy world to break more than just hearts, and standing up to them comes with its own costs.

Rita keeps calm and carries on with a little help from her friends at the factory. But then she discovers someone there has been leaking secrets to the Germans. With D-Day on the horizon, Rita must work out who she can rely on – and fast.

‘You sure you’re all right, Em?’ Rita went on carefully filling the two-pound shell case with the dangerous powder. When it reached the required level the powder had to be tamped down and the shell set back on the conveyor-belt. It was exacting work and grains of powder floated in the air, clinging to their skin and hair. Picric acid drops and toluene vapour caused the nausea and skin irritation that many of the girls suffered from, so spilled grains had to be cleared up immediately.

One careless mistake tamping down a shell could send the whole workroom to kingdom come, and Em’s shaking hand as she wrote on her clipboard proved to Rita that her friend was in no fit state to take over on the line should she be needed there.

Sometimes Em handled the tiny detonators: she had to pick each one up, usually half the size of an aspirin tablet, with tweezers, and one little slip could prove fatal. ‘Jack’s antics shook me up more than I thought.’ It was almost as though she had heard Rita’s thought. ‘Don’t worry, I’m not going on the line. I’m glad we got the day off tomorrow, though,’ she continued, ‘Me and Jack can maybe have a bit of a talk.’

At lunchtime Lizzie came down from the offices to sit with her mother and her friends, but Em was still shaken up. She spoke hardly a word to Rita or her other mate, Gladys, Rita’s landlady. The four of them huddled together on chairs, eating their sandwiches and drinking tea from their flasks. The colours of the factory women’s uniforms showed which areas they worked in, but they were also for protection. Any hair that wasn’t covered by the turban they all wore eventually turned the colour of a canary’s feathers.

Around the walls of the room posters advised the girls to ‘Be Like Dad, Keep Mum’, ‘Come Into the Factories’ and Rita’s favourite, ‘You Give Us the Fire and We’ll Give ’Em Hell’, with its picture of an airman standing in the cockpit of his plane.

Like many of the other workers, the four friends had decided today it was too cold to venture out into the fresh air of the yard. Besides, changing their clothes and shoes, then being searched for cigarettes, matches or any object that might cause a spark and set off an explosion took valuable time off their lunch break. Leaving the premises also meant being searched for stolen materials.

Because of the secret nature of their work the women’s leisure time at Priddy’s was accounted for, including trips to the lavatory. Officials handed out information only when it was necessary. In fact, the women knew nothing of what went on in other parts of the factory.

Em, as overseer, knew a little more than her friends but her loyalty to Priddy’s meant that she kept her mouth closed and her ears open. All the same, safety at work was paramount. It had been Rita’s own carelessness that had resulted in the explosion that had put her in hospital. Rita knew how lucky she was to be alive and how fortunate it was that no one else had been hurt in the fire. Priddy’s didn’t need another accident.

Em had only picked at her food, Rita noticed. She’d rolled up her sleeves and the hem of the bandage was just visible.

‘The train’s loaded up,’ said Gladys, breaking into Rita’s thoughts with a dig in her ribs. Her turban had slipped and her bright lipstick had leaked into the small lines around her mouth. Outside the window Rita could see the railway that ferried materials and the filled shell cases to various stations to be lifted aboard carriers or ships for transport elsewhere. Across the yard, an American destroyer was moored at Portsmouth Dockyard. The stretch of water between Portsmouth and Gosport, its sister town, was filled with boats. Along the shore at Hardway, building work was taking place, but it was all very hush-hush.

She smiled: the ferry that travelled between Gosport and Portsmouth looked like a small black beetle scuttling across the water. She drank some thick brown tea. ‘Funny how thousands of men and women can work in this backwater and not be seen either by road or air, isn’t it?’

‘That’s because, although we’re close to the sea, we’re not in the heart of Gosport. Also, the roofs here are all painted green to blend in with the surrounding trees and countryside,’ replied Gladys. Rita noted that Gladys hadn’t pencilled her eyebrows evenly. She decided not to say anything. After all, eyebrows were sisters, not twins, as Gladys kept telling her.

‘Have we got any bread at home?’ The last of this morning’s loaf, except for a tiny crust, had gone into their Spam sandwiches for lunch. Gladys frowned. ‘I asked Pixie to queue for us today.’ Pixie was Gladys’s daughter and lived next door at number twelve, Alma Street. Since her return to Gosport from the hospital, Rita had lodged with Gladys.

‘I poked the last bit of the crust into the canary’s cage,’ said Rita. ‘It was so hard I thought he might think it was a bit of cuttlefish bone!’

‘So that’s where it went. I was going to damp it down to soften it up a bit,’ said Gladys. ‘It would have tasted all right with a dollop of jam on it.’ Gladys looked wistful.

‘Lovely jam and tins of peaches your Blackie brought round the other night. A rare treat they was.’ Gladys poked her in the ribs again. ‘I wish I ’ad a lovely boy like him to take me around . . .’

‘Come off it! You’ve had more men than I’ve had hot dinners!’ Rita giggled. Gladys had been quite a girl when she was younger. But she didn’t like to be reminded of it, for that period of her life had been painful.

‘Yeah! Well, not all those men were as generous as your Blackie,’ said Gladys. Rita gave her a knowing look. It was time to change the subject.

Gladys turned away. ‘Now there’s a man to set all our hearts aflutter,’ she exclaimed. Rita noticed all the women’s heads swivel in one direction. ‘Rupert Scrivenor’s definitely a sight for sore eyes,’ she admitted.

The tall, slim, blond man was walking between the lines, stopping to look here and there at the workers’ tools. Every so often he’d pause to make a note on the clipboard he was carrying. ‘He’s a better manager than the last one,’ said Gladys.

2 Responses to The Canary Girls by Rosie Archer – Extract and Giveaway.