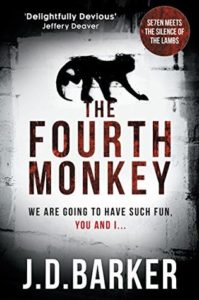 That’s the Four Monkey Killer or ‘4MK’. A murderer with a twisted vision and absolutely no mercy.

Detective Sam Porter has hunted him for five long years, the recipient of box after box of grisly trinkets carved from the bodies of 4MK’s victims.

I loved this. It is so beautifully twisted that I don’t even have a word for it. I banged through it, unable to look away, often freaking out slightly, J D Barker writes with such visceral reality that you just fall into it stuck between horrified and fascinated.

So it is a serial killer thriller, which is an actual thriller, whilst being clever and manipulative enough to keep you guessing and with some characters of great depth and perception. I loved Sam Porter and his back story drip fed to us during the course of the read is excellent and genuinely absorbing.

The psychology of the killer is also really really quite spellbinding – the diary entries formed a central core to the plot and made up some of my favourite parts of The Fourth Monkey – and BOOM what an ending too, as the two stories came together to create a perfect storm.

It is graphic and doesn’t pull punches so if you are of a nervous disposition be prepared – but for me the violent scenes just fed into the rest perfectly, not salacious just truthful (and to be honest extraordinarily alluring despite the odd urge to just clap my hands over my eyes) – the author creates quite the dilemma, I was both urging Sam on to catch him whilst also vaguely hoping that he might get away – which of these two things happens you’ll have to read to  find out.

Overall The Fourth Monkey is just brilliant – a page turning, crazily epic, beautifully unbalancing blast of a story. More. More of that sort of thing I say.