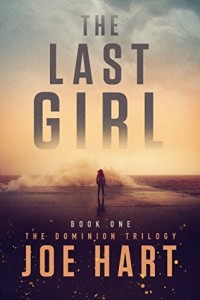 Source: My wish was granted on Netgalley

A mysterious worldwide epidemic reduces the birthrate of female infants from 50 percent to less than 1 percent. Medical science and governments around the world scramble in an effort to solve the problem, but twenty-five years later there is no cure, and an entire generation grows up with a population of fewer than a thousand women.

Zoey and some of the surviving young women are housed in a scientific research compound dedicated to determining the cause. For two decades, she’s been isolated from her family, treated as a test subject, and locked away—told only that the virus has wiped out the rest of the world’s population.

Wow, The Last Girl seems to have divided the readers, a real love hate relationship going on with this one – me I’m on the “love” side of the fence mainly because I could not put the darn thing down once I’d started it, to me always the sign of a good book, whether that be a commercial novel or literary fiction and no matter the genre.

This is honestly addictive – I was right on board with Zoey from word one and it was an interesting premise executed well. In a world where the female population has been decimated, Zoey lives in a compound with other girls, protected but also caged, as the story unfolds and we discover what might be in store for her, it is not hard to get behind her wish to escape.

Joe Hart has written a thriller rather than a book chock full of social commentary – whilst he does explore the idea of how a world might treat its women when they are so few in number, he concentrates more on one girls determination not to be a guinea pig and given us a main protagonist who questions everything around her and does not go willingly to her fate.

Whilst Zoey is not literally the last girl, she is one of them and this brings a great edge to proceedings – as a reader you can question both her choices and that of those who seek to contain her. Yes the bad guys are bad and the things they do are unquestionably wrong, but when survival of the human race is at stake, who knows where the line would or should be drawn. Well we do obviously and Zoey does too, so begins her fight for survival and her emergence into a wider world she knows nothing about.

It was engaging and although often predictable, always fast paced and intriguing…when I had finished it I immediately wanted the next – another sign for me of a good story. I will look forward to seeing what happens next. The ending gives the author a chance to be quite brave moving forward, with regards to the ability of his characters so we’ll see where that goes. Overall though a great start to a trilogy I will be sticking with. Bring on book two!

You can purchase The Last Girl by clickety clicking HERE