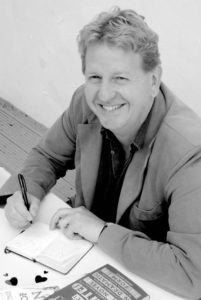 Today I am VERY happy to welcome Harry to Liz Loves Books talking about his new novel, The Last Hour and some of his influences. Details on the book follow at the end…

One book above all changed my life. For my sixteenth birthday my godfather gave me Robin Lane Fox`s biography Alexander the Great. It was dauntingly long, but turned out to be enthralling. Scholarly, but accessible, witty and digressive, reading it made me feel what it was like marching with Alexander. I was already fascinated by history, but it started my love of the Classical world. Without this book I would not have ended up as an ancient history don at Oxford.

As a student, I devoured the historical fiction of Mary Renault. My favourite remains The Persian Boy; a tour de force that recreates not one but two cultures, as the Macedonians are observed through the eyes of the Persian eunuch Bagoas. Later I discovered the Jack Aubrey series of novels of Patrick O`Brian, which begins with Master and Commander. A particular feature is the way that the characters grow and change as the series progresses. The reader ages with Jack Aubrey and his especial friend Stephen Maturin. They become much loved companions. Together Renault and O`Brian summon up both the similarities to us as well as the otherness of the past,. They prove that the realities and truth of history do not have to be sacrificed writing fiction set in the past.

My new novel, The Last Hour, takes my fiction in a new direction. Although the hero is Ballista, the eponymous main character from my Warrior of Rome series, The Last Hour is my first thriller. Aiming for a straightforward page-turning story, with a relentless sense of menace, and bursts of explosive action, it seemed sensible to learn from the best. I had not previously read the Jack Reacher novels of Lee Child, but am now a firm fan. The stripped down pace of novels like Personal is an inspiration.

The Last Hour is set in the city of Rome, the action unfolding in just twenty four hours. Ballista has stumbled into a conspiracy to assassinate the Emperor. Alone and unarmed, every man`s hand is against him. He has until sunset the next day to prevent the killing, and to save his own family. As Ballista runs and fights across the seven hills, I wanted to provide an atmospheric portrait of Rome. Attempting this I was much influenced by the evocation of Venice in the Guido Brunetti novels of Donna Leon, such as Death at La Fenice. As such, it gives me especial pleasure that Donna Leon enjoyed The Last Hour, and has provided a quote for the jacket.

Film and TV are great influences. My all time favourite shows are The Sopranos and The Wire. They are the nearest one can get to the depth and texture of a novel on the screen. Writing of The Last Hour, to immerse myself in the underworld of (modern) Rome, I watched the brilliant Italian gangster series Romanzo Criminale. For pacing no better guides could be imagined than the first season of 24 staring Kiefer Sutherland, or the best Bond film ever made Skyfall.

A lone figure stands silhouetted atop the Mausoleum of Hadrian. Behind him, the sun is setting over the centre of the known world. Far below, the river is in full flood. The City of Rome lies spread out before him on the far bank. Footsteps pound up the stairs. He’s been set up. An enemy is closing in; he is cornered. He jumps.

Bruised and battered, he crawls out of the raging river. He is alone and unarmed, without money or friends, trapped in a deadly conspiracy at the heart of the Empire. The City Watch has orders to take him alive; other, more sinister, forces want him dead. As the day dies, he realises he has only 24 hours to expose the conspirators, and save the leader of the world. If the Emperor dies, chaos and violence will ensue. If the Emperor dies, every single person he loves will die.

He must run, bluff, hide and fight his way across the Seven Hills.
He must reach the Colosseum, and the Emperor.
He must make it to The Last Hour.

You can purchase The Last Hour Here.