The Life and Death of Sophie Stark – Blog Tour 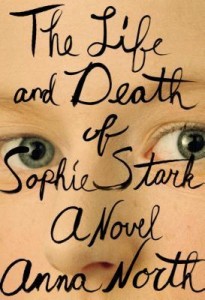 I am SO happy to be part of the blog tour for this simply beautiful and poignant novel. I was even more happy to be able to ask the author some questions about it – I found the answers absolutely fascinating. Here is  what she had to tell me about Sophie Stark – and following that are my thoughts on the novel. Enjoy!

Even though we only see her through the eyes of other characters, tell us a little about the inspiration behind the Sophie Stark character.

At first I wanted to write about a female character who was a sort of political documentarian — someone who made movies about a Latin American socialist leader. I knew her name would be Sophie Stark and I wrote a tiny bit about her, but I put it away for years while I worked on my first book. When I came back to Sophie I realized the political angle wasn’t what I was most interested in. I was interested in Sophie — I wanted to explore this brilliant, sometimes cruel character and how she was remembered by those around her, how her art and life went down in history.

Was it interesting to explore the impact that a single life can have on so many others?

Definitely. At first I was most interested in Sophie — how did all the different characters see her, and what did their perceptions reveal about her? But as I wrote from their points of view, I got really invested in their lives too — I got interested in Jacob’s mother, George’s ex-wife, Allison’s husband. By the time I finished the book, it wasn’t just about how the main character influenced the others; it was about a group of people, all of them bound together to some degree by Sophie, but all of them with joys and sorrows of their own that are just as important as hers (even if she doesn’t always recognize that).

Through their interactions with Sophie we also learn a lot about the characters telling the story – Did you feel that any one of them (or more than one) might have been better if she had not crossed their path?

I definitely think the characters vary in how much Sophie helps or harms them. Allison explicitly says she’s better off for having met Sophie (but that Sophie might not be better off for having met her). I think Daniel’s clearly better off too — I think Sophie helps him understand himself in a fundamental way. Sophie helps Ben Martin form his aesthetic as a critic, and she helps George decide he wants to direct. With Jacob, I’m not so sure — she seems like she’s helping him at first, but I don’t know if he’d ultimately say she did. And poor Robbie — it’s possible he’d be better off without the influence of Sophie in his life, but then again, he wouldn’t be who he is.

Do you think “The Life and Death of Sophie Stark” would translate well to screen (I am in no doubt that it would and would love to see it done) considering that it has creativity through film right at the heart of the story?

I’d love to see a film adaptation, but I think it would actually look pretty different from the novel. The different points of view would be difficult to capture on screen; the directors might have to collapse some of them. I also think it would be interesting to see Sophie’s movies on screen, though I think they’d probably look very different than they do in my imagination. A work of fiction about a film is going to be really different from the film itself; it’s almost hard for me to imagine how the films would look if they were really made, even though I saw them in my head dozens of times.

Sophie is really an enigma start to finish. Did you ever really get a handle on her?

I did and I didn’t. On the one hand, I think I learned certain key things about Sophie as I was writing. She does care what other people think, in some ways — at least, she cares how people remember her. And she sort of feeds her own personal myth — in some ways, she encourages people to feel they can’t truly understand her. On the other hand, I don’t think she truly understands herself — I don’t think she knows why she is the way she is, why she can’t (or won’t) be more connected to people. And I think it was important that there was a part of her that remained enigmatic, even to me.

When you are not writing yourself, what type of novels do you love to lose yourself in?

I think I tend to like books about characters’ inner lives, especially female characters and especially characters who are on the brink of big life changes or decisions. Recently, I’ve loved Samantha Harvey’s “Dear Thief,” Rachel Cusk’s “Outline,” Helen Oyeyemi’s “White Is For Witching,” and Elisa Albert’s “After Birth.” All of these are about girls and women at pivotal times in their lives, wrestling with scary questions of love and family and identity.

Thank you SO much Anna – completely fascinating!

“It’s hard for me to talk about love. I think movies are the way I do that,” says Sophie Stark, a visionary and unapologetic filmmaker. She uses stories from the lives of those around her—her obsession, her girlfriend, and her husband—to create movies that bring her critical recognition and acclaim. But as her career explodes, Sophie’s unwavering dedication to her art leads to the shattering betrayal of the people she loves most.

Told in a chorus of voices belonging to those who knew her best, The Life and Death of Sophie Stark is an intimate portrait of an elusive woman whose monumental talent and relentless pursuit of truth reveal the cost of producing great art, both for the artist and for the people around her.

Firstly I would like to say about “The Life and Death of Sophie Stark” that not only is it one of my favourite books that I have read this year, but it has also gone immediately onto my favourite books of all time list. So there is that.

I was not sure about it originally – but the thing with this novel is that it sucks you in with some poignant and gorgeous writing and every single character is full of depth, realism and an often ironic edge that is just simply brilliantly done.

Sophie Stark is a film maker. We never hear from her directly in the story but we do hear from an ensemble cast of characters who have been deeply effected by their interactions with her. She is an enigma, we meet her only through the eyes of others, still a profound picture starts to emerge of a troubled creative soul. Even so is this the real Sophie? Well that is the unique twist to this novel, we may guess but can never know…

The author uses her characters to give both a public and private view of Sophie – from her lovers to her family and beyond. Sometimes only peripherally touching a life, Sophie still seems to have formed some part of it and for me she felt like a whirlwind of a human being, touching down briefly then drifting away, tempestuous and suddenly changing lives without warning.

Imaginatively speaking this is alluring, I melted into the descriptions of Sophie’s films, I wanted to watch every single one and indeed felt like I had. Then of course, through the telling we learn so much about the characters who are talking, their hopes dreams and fears, their lives both with and without her. As a character piece this is a truly impressive and magnificently constructed story – Anna North knows how to weave words around the reader and bring them into the world that she has created.

I was quite simply heartbroken at the end of this. Even now it is bittersweet. A book I shall return to again and again I’m sure, I really cannot recommend this highly enough.

This is what storytelling is all about.