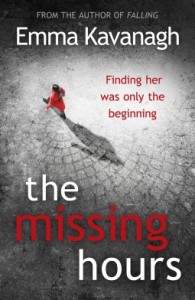 Today I am VERY happy to welcome one of my favourite people (and writers) Emma Kavanagh, to tell us a little about her latest novel The Missing Hours.

Can you tell us a bit about the background to The Missing Hours? What originally inspired this particular story?

Where a book begins for me is always up for grabs. Sometimes it’s a scene, sometimes it’s a title. In the case of The Missing Hours, it was a question of what if – what if a woman vanished, leaving her young children alone, only to reappear hours later, with no apparent recollection of where she has been or what has happened within the intervening period. Who could that woman be? What could have happened in her life to have taken her from her children. It was only in answering those questions for myself that I came to understand Selena’s connection with the kidnap and ransom industry, and just how far reaching this woman’s grip could be.

The parts of the narrative that deal with hostage negotiation were fascinating. Something you had to research a lot? I guess a lot of the realities are not in the novel for obvious reasons…

This was a TOUGH book to research. The K&R industry is incredibly private, and for very good reasons. The last thing that you want is potential hostage takers having an understanding of the kind of payments that have gone before. I was lucky in that I know a lot of people who do bizarre jobs, and those people know other people who do even MORE bizarre jobs. I spent time with a couple of kidnap & ransom consultants, and it was they who really brought this world into focus for me. For the most part, the events related in the book are as accurate as I could make them, given the constraints of privacy required by the industry. Whilst each event within the book was totally fictional, I tried to have the Cole Group deal with them in as authentic a manner as possible.

What made you choose to make the two main characters siblings? How did you define that relationship?

It took some time to work out this relationship. I tried a couple of ideas, none of which really seemed to work. It was only when I thought about the possibility of them being siblings that things began to come together. It felt like it gave the process a really interesting, sometimes fun and sometimes frustrating dynamic. You have this competitiveness that is balanced out by affection, humour that is tinged with irritation. Once it started to flow, it was a really fun relationship to write.

The Missing Hours is a real page turner and my favourite novel of yours to date – how do you keep a reality check whilst still making it intriguing and engaging?

AWWW!!! *wipes away a tear* I feel a real affection for this book, now that it’s done. The process of it was quite a different story and there were many, many, MANY days when I wanted to fling it at the wall. I have always been a stickler for planning and have always written in a linear fashion – two things that totally went out the window for this book. It felt like a gigantic puzzle in which I was trying to fit the pieces together day by day. As to the reality check, often I think it’s only outside eyes that can provide that. I’d lived this book for almost a year. I got to the point where I had to say to my agent, the wonderful Camilla Wray, “I just can’t see it anymore. You tell me what’s wrong.” Her notes were what allowed me to identify the weaknesses and pull it into the shape it needed.

Have you read any books this year that you would like to recommend? What has been a standout (or two!) for you?

Ooh, I love this question! I was lucky enough to receive an advanced copy of A Rising Man, by Abir Mukherjee, an extraordinarily good debut set in Calcutta in 1919. Joanna Cannon’s The Trouble With Goats And Sheep, I just ADORED. And (I know you said two, but I’m rubbish at maths) The Woman In Cabin 10, the new book by Ruth Ware ruined my plan for an early night on more than one occasion.

Finally can you tell us anything about what is next for you?

I’m writing. What else? I am currently working on book four which, to my horror, STILL does not have a title I’m happy with, and I am about halfway through. So yay…I think.

A woman disappears
One moment, Selena Cole is in the playground with her children and the next, she has vanished without a trace.
A woman returns
Twenty hours later, Selena is found safe and well, but with no memory of where she has been.
What took place in those missing hours, and are they linked to the discovery of a nearby murder?
‘Is it a forgetting or a deception?’

So when an author you’ve admired from their very first  book hits the sweet spot in the writing and storytelling stakes it is a real moment of reading joy, such as has just  happened with Emma Kavanagh and “The Missing Hours”.  I was a huge fan of the previous two novels but this  was a pretty much one sitting completely immersed practically inhaled read that actually I’ve just put down. And had to write about straight away.

I could just leave it at that but I like to talk so I won’t.

The Missing Hours is told from multiple points of view, has some fascinating characters (I can’t even pick one particularly to rave about so just assume they are all pretty perfect) a fascinating background (that of Kidnap and Ransom) a really engaging and well plotted mystery story (No I really had no idea so this author joins the ranks of the “Got Liz with a twist” brigade) and is beautifully written throughout.

Loved the brother/sister police duo, the Cole family were highly intriguing – Emma Kavanagh has the magic touch when it comes to character study – in “The Missing Hours” you have that tenfold, probably why I had no idea as to the outcome. I was too busy being caught up in the lives of these people, and ok I guess I DID have a bit of a soft spot for Beck, but the entire cast were utterly alluring. Always a rocking good read when you actually care.

It is gripping, for me especially with relation to the little side pieces which I won’t say too much about to avoid spoilers, but I rattled through it in true grasshopper on acid fashion until the final pages. With a perfectly placed atmospheric ending that just put the icing right on top of the already delicious cake, The Missing Hours comes highly recommended from me.

You can purchase The Missing Hours by clickety clicking HERE.

Find out more from the Tour! 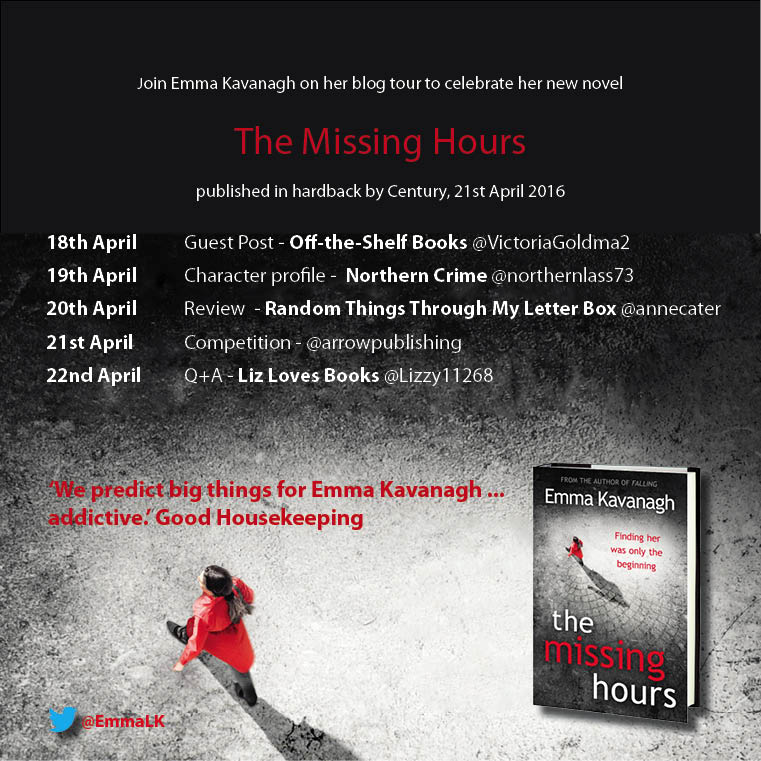