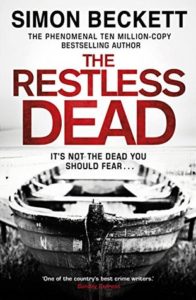 I was VERY happy to see Dr David Hunter back in the latest novel from Simon Beckett – and even more happy to be able to ask him a couple of questions about it for the blog tour. My review and details on the book follow that.

Thanks so much for agreeing to answer some questions – firstly I was so happy to see Dr Hunter reappear, for readers coming into the series here could you tell us a little something about the background to the character?

David Hunter is a forensic anthropologist, which means he specialises in analysing human remains that are either decomposed or badly damaged. After losing his wife and young daughter in a car accident, he found his work too painful and walked away from everything to do with his old life. At the start of the first book in the series, The Chemistry of Death, he’s working as a GP, which he’d originally trained to be.

But after being reluctantly drawn into a murder investigation again, he realised his true calling was working with the dead rather than the living and returned to forensic anthropology. Now he’s a police consultant, based in London but travelling to wherever in the UK the police find a body requiring his unique set of skills.

Hunter isn’t a traditional crime or thriller ‘hero’. He doesn’t act tough, kick down doors or rebel against authority. And he doesn’t always get things right: he makes mistakes and suffers self-doubt just like the rest of us. It was important to me that – except for his work and tragic past – that he was seen as a normal person: a fallible, damaged individual who readers could sympathise and associate with. One of the nicest comments I’ve had was from a reader who said she worried he wasn’t eating properly. That showed she saw him as a real character.

In The Restless Dead he is back in the game through certain twists of fate – how do you go about building an intriguing mystery whilst keeping the wonderfully fascinating forensic detail so authentic?

I suppose it’s a question of finding the right balance. As interesting as the forensic details are, they still need to fit within a compelling story in order to work. And to my mind the Hunter books are as much psychological thrillers as forensic mysteries. They’re very character led, so I try to approach both plot and forensics from that perspective.

Obviously, the books need a lot of background research. Since I’m not a forensic expert myself – I worked as a freelance journalist before I wrote the Hunter series – I constantly quiz various police and forensic experts who are generous enough to help out. That makes the books more authentic, I think, since these are people who have actual training and experience in the field.

But fitting this sort of research into a fictional story can be tricky. More than once I’ve been forced to abandon a plot idea when one of the experts I’ve approached says, ‘No, that wouldn’t happen’. And I don’t want the forensic details to appear gratuitous, which can be a fine line when Hunter’s work involves detailed descriptions of decomposing remains. If you’re talking about blow-flies and maggots on a dead body you really don’t need to go into excessive detail to make the point.

Could you talk a little about the setting –not far from Mersea Island– is this somewhere you know well and what made you utilise this location for the book? It certainly created a beautifully atmospheric backdrop and allowed for some thrilling edge of the seat moments in the whole man v nature stakes.

The setting is very important for all the Hunter novels. Each one takes place somewhere different – Norfolk, the Outer Hebrides and so on – and the landscape plays a big part in establishing atmosphere and setting the scene. For The Restless Dead I knew it had to be somewhere with water, but I considered several possibilities before I finally settled on the Essex marshes. I liked the sense of loneliness and isolation they brought to the story, this flat vista of mudflats, reeds and open sky, as well as the fact that the landscape is constantly changing with the tides. And, of course, there’s an undercurrent of danger as well, because as peaceful these places appear they can also be treacherous. As soon as I read that the tides come in faster than a man can run, I was hooked.

Although the Essex marshes and that stretch of coastline are obviously real, as with the other Hunter books the actual locations where most of the story takes place are fictitious. That gives me freedom to write what I want without worrying if readers getting in touch to say I’ve put the post box on the wrong street corner. That doesn’t mean I don’t want these places to feel authentic, because I do. I’ll spend a lot of time researching the area where a book is set, and try to spend time there whenever possible.

But the main thing for me is finding a setting to fit the story, and that I can clearly see in my own mind. In that respect, I treat them in the same way I do the characters: they aren’t real, but I want people to be able to visualise them and feel that they could be.

Can you tell us anything about what is next? Will Dr Hunter return?

I’m a great believer in not talking things away, so I don’t like saying too much about what I’m working on. But I can say that Hunter will be back.

Finally, is there anything you have read recently that you would like to recommend to readers?

The book that’s stood out for me recently is Golden Hill by Francis Spufford. It’s set in eighteenth century Manhattan, and while I don’t read much historical fiction this was the best thing I’ve read in a long time.

It was on a Friday evening that forensics consultant Dr David Hunter took the call: a Detective Inspector Lundy from the Essex force. Just up the coast from Mersea Island, near a place called Backwaters, a badly decomposed body has been found and the local police would welcome Hunter’s help with the recovery and identification . . .
Because they would like it to be that of Leo Villiers, the 31 year-old son of a prominent local family who went missing weeks ago, and they are under pressure to close the case. Villiers was supposed to have been having an affair with a married woman, Emma Derby. She too is missing, and the belief is that the young man disposed of his lover, and then killed himself. If only it was so straightforward.
But Hunter has his doubts about the identity of the remains. The hands and feet are missing, the face no longer recognisable. Then further remains are found – and suddenly these remote wetlands are giving up yet more grisly secrets. As Hunter is slowly but surely drawn into a toxic mire of family secrets and resentments, local lies and deception, he finds himself unable, or perhaps unwilling, to escape even though he knows that the real threat comes from the living, not the dead.

I’m a huge fan of this series – if you haven’t read them yet I would HIGHLY recommend that you read them all, not that The Restless Dead is not perfectly readable and brilliant as a standalone but Dr Hunter is a character you want to be with from the beginning. Also for you readers who simply MUST read in order The Chemistry of Death is where to start.

This story finds our Dr Hunter called in unexpectedly to help with the recovery and identification of remains, but he is drawn into a mystery that offers danger at every turn. As with the previous novels, Simon Beckett brings a hugely atmospheric sense of tension in his writing and the forensic detail is both fascinating and incredibly accessible which really digs you deep into the tale and keeps you wrapped up in it. Beautifully descriptive in both setting and character this, like the others, is an addictive and all consuming read that you may well do in one sitting if you are prone to that sort of thing.

The subtle twists and turns are cleverly intricate, Dr Hunter’s personal story arc takes a compelling turn, there is nothing about this book that I didn’t love entirely – oh well apart from finishing it because I immediately and rather rabidly wanted more. Never have I been so pleased to return to a series I (and the author) have been away from for a while, this is intuitive, clever writing, I’d put it very near the top of the crime fiction I read.

Overall perfectly brilliant. Or brilliantly perfect. Either would work as well and this, as with the rest, comes highly recommended from me. 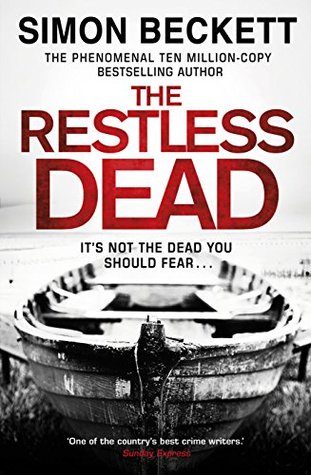