The Siege: Three Days of Terror Inside the Taj 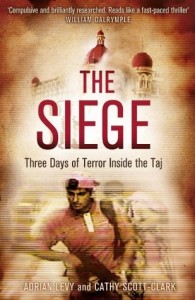 Thank you to Catherine at Penguin for tracking down a copy of this book for me.

So, recently I decided to expand my reading yet again by starting to read some more non-fiction  – something I’ve only dipped a toe into every now and again, much preferring fiction and all the adventures you can find there…

I started with Jamie Baywoods often hilarious account of how she settled into a new home- Getting Rooted in New Zealand – and then moved onto a “self help” book for those suffering a loss “You can Heal Your Heart” both of which gave me very different but equally rewarding reading experiences. I then put out a plea amongst friends as to what I should try next – The Siege, by Adrian Levy and Cathy Scott Clark, telling the story of the 2008 takeover of the Taj in Mumbai by Islamic terrorists seemed to be a popular choice – Read it they told me. Its fascinating, horrifying and compelling. So I did..and here is what I thought.

The Siege by Adrian Levy & Cathy Scott-Clark – a searing account of the 2005 terrorist attacks at Mumbai’s famous Taj Hotel.
On 26th November 2008 the Taj Mahal Palace hotel in Mumbai is besieged by Pakistani Islamists, armed with explosives and machine guns.
For three days, guests and staff of the hotel are trapped as the terrorists run amok.
On 29th November commandos launch Operation Black Tornado. The world holds its breath.

The first thing that struck me was how well researched this book was. Starting with the “Dramatis personae” giving an overview of the people involved and a brief background, including guests, staff and the terrorists themselves, I was immediately right at the heart of the matter – I wanted to find out what happened to all of them. Leading on with a bit of background of the events leading up to the terror attacks, and some information on the hotel, you were left feeling slightly off kilter while you waited for what you knew was coming..

The second thing that struck me was how much this book read as if it was a Thriller – a fast paced one at that – I often had to stop for a moment and remind myself, especially in the more violent moments, that these people were REAL. Everything I was reading actually happened – it was a sobering thought and one that compelled me to read ever onwards. I read this in two days, such was my inability to leave it before I knew the outcome. I had zero knowledge of these events before opening this account – such is the beauty of the writing I now feel almost as if I were there – or at the very least had friends who were.

This is a soundbite in a way – a little of my own research tells me that there was a lot more to the terror attacks on Mumbai in 2008 quite apart from the events at the Taj – I feel that I absolutely want to know more. If anyone knows of any other books that tackle this subject well, I would be very interested to hear about them.

I’m not sure what else I can say really – I can’t speak to characterisation because these are not characters they are human beings who suffered at the hands of other human beings – that very fact makes this a must read. I would highly recommend that you give it a go.

At the end, I read every name in the “RIP” section and shed a tear for those people I had never known, and never WOULD have known even had they lived.