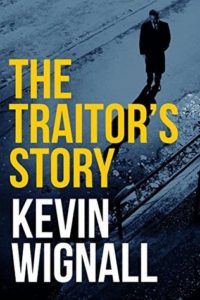 I was lucky enough to meet Kevin Wignall earlier this year at Crimefest. Brilliant company and a very nice man, of course me being me that led into me reading something. Specifically Mr Wignall’s latest novel The Traitors Story. Turned out I kind of loved it. Also turns out that Mr Wignall is a pretty incredible writer as well as being utterly able to put up with randomly inane idiots into the early hours. You may think I’m referring to me but not so much…..you probably  had to be there…..

Anyway I gently persuaded Kevin to answer some bookish related questions for me. Here are the results followed by a little review and some handy links.

First of all where have you BEEN all my life (in the reading sense, lets not get carried away) because The Traitors Story is an absolutely banging thriller – hang on there’s a more appropriate question in there somewhere – what inspired this particular story. Or what generally starts you off on things…

Thank you, Liz. I suppose my books nearly always deal with the same themes, the fault lines between good and bad, moral and amoral, usually with background themes of regret and lost opportunity. Beyond that, I will often have lots of little ideas that slowly coalesce around a central plot. I think in this case I had two combined thoughts to begin with, one of a person who could help his neighbours find their missing daughter but who can’t admit to his own past, and the other of someone whose life has become so cauterised that he has more empathy with his historical subject matter than he does with his own girlfriend.

Talk to me about characters – especially Jonas who was my favourite (maybe it was supposed to be Finn but we’ll just have to live with my obscure tastes) but Finn too obviously. How do you bring life to them. Real life people you’ve met? A bit of yourself in there somewhere?

Hmm. Well, I think all my central characters are autobiographical to some extent. It’s quite hard for me to imagine how you could invest so much in a character who isn’t a projection of your own personality. I’ve said in the past that my protagonists tend to be slightly shorter but rather more charming versions of me. As for Jonas, you’re not obscure at all, because he is in many ways the beating heart of the book. I originally got the idea for him reading a book called “The Ice Palace” by Tarjei Vesaas, a character who appears briefly and who isn’t central, but who’s been engaged in a sad and lonely vigil “off-camera”. I thought originally of including a similar character, peripheral, but Jonas grew and grew and took on a life of his own. He also, of course, is very much like Finn, so it’s instructive that Jonas, in many different ways, is the person who reminds Finn of his own humanity.

I do like a bit of treacherous plotting. Are you a post it note kind of writer? Whiteboard? How exactly do you hold it all together?

Almost entirely in my head. I’ll occasionally write down a scrap of dialogue, I write down names. But it’s why I take so long planning a book. I plan it all in my head until it fits together perfectly, until I can “walk through” it in real time.

The question I always ask as it fascinates me – which writers are you inspired by? And name a book you’ve read that immediately made you go “Dammit I wish I’d written that”

Well, I make no secret that as a teenager I was hugely inspired by Graham Greene, although I’ve been thinking a lot about this lately – are we drawn to the writers who reflect our own interests and our own writing styles, or do they influence us? I suspect it’s more the former. Stephen Crane, Evelyn Waugh, Jane Austen (“The Hunter’s Prayer” is partly inspired by “Persuasion”), they all spoke to something that was already inside me, maybe just an aim to tell a story in the simplest and most concise form possible (apologies, that probably sounds precious!). As for “Dammit I wish I’d written that”, many, many books, but let’s mention some recent ones – “Bereft” by Chris Womersley, “The End of Everything” by Megan Abbott, “The Dispatcher” by Ryan David Jahn, “Winter’s Bone” by Daniel Woodrell, “I Remember You” by Yrsa Sigurdardottir, everything by Magnus Mills…

Do you have any future novel plans you can share with us?

I’m just starting work on a new novel. It’s called “A Fragile Thing” (that’s a working title, but the working title usually becomes the title) and it deals with money-laundering, but also with the complex tensions within families. It’s set mainly in Italy and Switzerland, which I fear is becoming a bit predictable for me, but it’s where it had to be. Should be out next spring.

Tell us about you in 5 easy soundbites –

Both, but also a lot of the other.

* Strangest situation you’ve ever found yourself in

Seriously, I would have to think long and hard, because my normal seems to be most people’s strange. I woke up inside my own fridge once – I suppose that would count as a strange situation…

* One gadget you simply couldn’t live without

I feel like I want to say phone/internet, but I’m old enough to know that I was quite capable of living without either.

I’m not sure that it’s a habit, but I have a terrible tendency to say what everyone else is thinking but too considerate/afraid to say. It’s a habit I try to break but it’s deeply ingrained. At a party recently, someone started to cry and Tom Wood looked at me and said, “It’s your fault.” I gave him a questioning stare and he said, “It’s always your fault”. And in that, alas, he has a pretty good point.

Oh there are too many. I like reading Telegraph obituaries, what I call “multi-part lives”, these people for whom the headline will read, “Won an instant MC at the battle of Monte Cassino, and went on to save the Patagonian Mongoose from extinction”. That’s the kind of life I want, where there’s always something else to do. It’s not just war heroes and there are still people who keep pushing forward (Robert Plant’s a good example). That’s what I’d like – “Kevin Wignall, author of reasonably well-received thrillers, who later became a world authority on Memorial architecture and helped discover the wreck of the Tartarus in deep waters off the coast of Zanzibar”… that would be a real life, wouldn’t it?

When fifteen-year-old American Hailey Portman goes missing in Switzerland, her desperate parents seek the help of their neighbor, Finn Harrington, a seemingly quiet historian rumored to be a former spy.

Sensing the story runs deeper than anyone yet knows, Finn reluctantly agrees to make some enquiries. He has little to go on other than his instincts, and his instincts have been wrong in the past—sometimes spectacularly wrong.

But he gets involved anyway, never imagining that Hailey’s disappearance might be linked to the tragic events that ended his career six years earlier, drawing him back into a deadly world that has neither forgiven nor forgotten.

I loved The Traitors story. It was just perfect read at perfect time for me – I’d had a few disappointing starts with some novels so when I looked up having read half of this in one sitting, with a sudden jolting realisation that I was late for things I was supposed to be turning up to (sorry Hayley – you know what I’m like) it was like YAY. Book love kicking in.

This is a quietly absorbing thriller with some hugely fascinating characters and, as you can see from the above, a highly addictive quality, you just don’t want to stop reading. A complex plot that is still entirely and intensely readable, as we follow Finn both in his past and present, one of the best things about it is the sheer depth the author  brings to the characters and the world they inhabit. In Finns case a rather shadowy world – I do love a good spy story especially one this good- but also bringing a rich context to the more mundane.  The entire novel is beautifully written, absolutely engaging and never falters. An utterly banging read from the first sentence to the last sentence and all of the bits in between.

Its not like its just a straight up thriller either. Atmospheric, thought provoking in parts,  multi layered and completely believable, its a fictional world you can sink into and lose your own reality for a while. Plus it had Jonas. Really – I adored that character with a passion. I think perhaps I’d like an entire novel following him around – if I ruled the world…

Finn himself is entirely perfect as a main protagonist, deeply intriguing and going on somewhat of a personal journey, flawed yet engaging, whilst Jonas might be the heart here Finn is the soul. Plus you know, its a blinking good telling of a blinking good story. Kevin  Wignall it turns out is a true storyteller.

Definitely highly recommended by me – no prevarication. Don’t miss it! 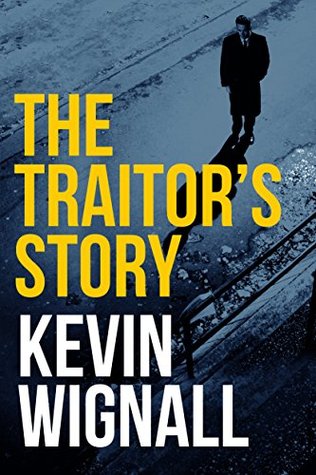