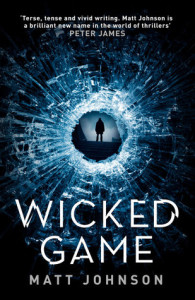 2001. Age is catching up with Robert Finlay, a police officer on the Royalty Protection team based in London. He’s looking forward to returning to uniform policing and a less stressful life with his new family. But fate has other plans. A policeman is killed by a bomb blast, and a second is gunned down in his own driveway. Both of the murdered men were former Army colleagues from Finlay’s SAS regiment, and a series of explosive events makes it clear that he is not the ordinary man that his colleagues and new family think he is. And so begins a game of cat and mouse in which Finlay is forced to test his long-buried skills in a fight against a determined, unidentified enemy.

Wicked Game is an incredible thriller. In fact I’m not even sure I like to call it a thriller (even though it thrills) because that often brings to mind banging action with very little depth elsewhere (nothing wrong with that, books are for all seasons) but Wicked Game is full of depth and feeling. Chock full of it. Plus thrills as well. You can’t go wrong really.

Robert Finlay is also an incredible character. Keeping the reader hooked into a story is often the job of the main protagonist and in Robert Finlay Matt Johnson has created a perfect storm. Challenged and flawed, the author shows us that which  defines him, throws us into his world and then throws all of us off a cliff. Robert lives a much quieter life until a series of events bring his past into sharp focus – suddenly he is having to remember who he was, the man he thought he had left behind and it is an engaging, emotive and yes exciting journey.

Excellent character study aside this novel is also genuinely thrilling – you know, that little feeling you get in the pit of your stomach when action is jumping off the page at you – Wicked Game has that in spades and will often get the reading adrenalin going. Taking reality and weaving fiction around it is one of the obvious strengths of this author – nothing in this book is unbelievable, an authenticity that hits hard, unsurprising in some ways considering Matt’s background. However knowing it doesnt mean you can necessarily write it and make people understand the terror and the horror and the kind of inner strength it takes to deal with such unimaginable situations – this author can and does. From first page to last.

Wicked Game builds the tension in an intelligent and emotional way, has many layers to both time, place and sense of character and is basically a top notch “thriller” that has a dark heart and an emotional soul. It is not a book that will be read and then forgotton – this one will stay with you. As such it gets the highly recommended tag from me and in my “most anticipated” stakes the follow up to Wicked Game is somewhere high up my list. Excellent, thought provoking, clever and beautifully written. 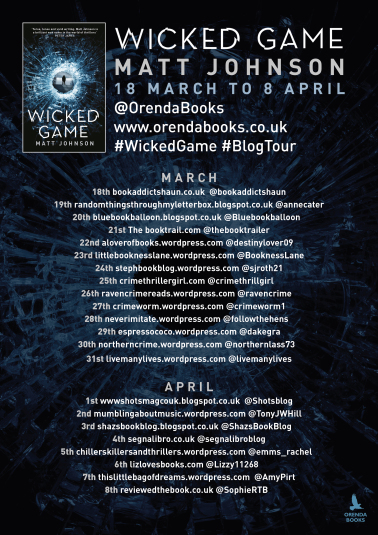