Top Ten 2014 Spotlight: The Girl with all the Gifts. Interview with M R Carey. 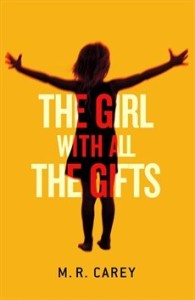 So in at No 2 of my Top Ten Reads of 2014 came the magnificent “The Girl with All The Gifts” which reminded me why I read in the first place and still stays with me even now. Mr Carey kindly answered a few questions for me: so here you go.

Tell us about the inspiration behind Melanie and her story.
The starting point was this image of a little girl writing an essay in a deserted classroom – and writing around or just plain missing the fact of her own mortality. A dead girl, writing about her future. For once I was writing to a spec brief – a story for a themed anthology of shorts with a general focus on “school days”. So I had to come up with a story set in a school or playing off a school situation. I cast my mind back to my own school days, and this was what came up.

What’s scary is that I’ve since spoken to a friend (Al Davison, the writer/artist of Spiral Cage) who has severe physical disabilities, and he said his experience of school was incredibly close to Melanie’s. Al has spina bifida, and has been confined to a wheelchair for most of his life. He told me that as a child, in a specialised school for physically handicapped children, he was made to take naps at stipulated times and to sit unoccupied in his chair for long periods every day, and this was very tightly regimented. So I made up this nightmare institution and then I found that there are, or have been, places very like it.

Are you tempted to write more set in that world? Or indeed are you planning to?
I don’t have any immediate plans to write a sequel. It feels as though it would have to be a very different kind of book, because of how the climax of The Girl With All the Gifts plays out.

But I’ve toyed with the idea of writing a sort of meanwhile-quel. A book that would be set in Beacon at the same time that these events are playing out in London and the midlands. We never do get a definitive answer in Girl as to what’s happening in Beacon and whether it’s even still standing, and I think it might be an interesting (if unsettling) place to visit.

That would be some way in the future, though. I have at least two other books to write first.

Apart from Melanie, did you have a favourite character to write?
I enjoyed writing all of the core characters, but I confess I particularly enjoyed writing Sergeant Parks. The gradual process by which he comes to respect and then to care for Melanie is – after Melanie’s friendship with Miss Justineau – one of the emotional pivots of the story, and I very much liked opening up this initially very closed and taciturn character to the reader’s view.

Always a tough question! Okay, as you know I have a background in comics writing. A lot of my friends this year are going to find A Dream of Flying in their Christmas stockings. It’s the first volume in the re-issued Miracleman saga. It’s so exciting to see these Alan Moore classics back in print after a quarter of a century – and I know many people who will utterly love their clever, disturbing deconstruction of the superhero genre. The central situation is a bizarre one, but Moore takes it to some amazing places. Imagine you were a middle-aged guy, living a fairly humdrum life, and you suddenly remembered that as a young man you had a magic word that turned you into a superhuman being with godlike powers. And then you remembered the word, and you said it aloud for the first time in twenty years…