What She Left with T R Richmond. 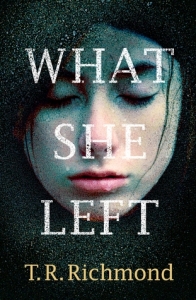 So today you can get your hands on “What She Left” by T R Richmond which is a superbly compelling mystery and a very interesting premise. I was lucky enough to ask the author a few questions so here we go….

Can you tell us a little about the inspiration behind the story?
The original kernel of the idea came to me when I read a tweet by someone about what piece of music they’d like played at their funeral. It struck me that if they did go under a bus that day, how bizarre/intimate that would be to read. That got me thinking, what else could I learn about this person on Twitter? That eventually took me to the idea of reassembling, jigsaw puzzle-like, a suspense story from a young woman’s digital and paper trail. More than at any point in history, each of us leaves such a ‘footprint’ nowadays, after all. If you’re wondering what the song was, incidentally – it was Angels by Robbie Williams.

Are any of the characters based on anyone you know?
No. Some writers start with their characters and have them fully formed before they have a story to put them in, but for me the starting point was structure.
I aimed for a contemporary epistolary style because I wanted readers to feel as if they are following an unfolding real-life, real-time news story, allowing them to ‘be detective’ themselves.
Now What She Left is written I do, of course, have a clear picture in my mind of what the characters look like. As for what they sound like, I’ve been incredibly lucky that Emilia Clarke and Charles Dance are playing Alice Salmon and Professor Cooke in the audio version, so their voices are very resonant to me now.
I did have a weird experience when I was about half way into the book when I saw someone and thought: That’s Alice. She was sitting on the table next to me in a restaurant and I didn’t have a clue who she was, but the way she looked, the way she spoke, the way she held her glass, everything, just shouted “Alice” to me. After that evening, it was her who I saw when I thought of Alice. So thanks, whoever you are!

How much impact do you believe social media has and is it mostly a good or a bad thing?
It’s had a massive influence on the way we communicate and relate to each other. It’s also influencing the media hugely because nowadays everyone potentially has a ‘voice’. An individual with 10,000 Twitter followers is, arguably, in as powerful and responsible a position as a media outlet with the same number of followers.
Social media is like the internet generally – it can be a force for good and bad, depending on how it’s used.
I enjoy using it, although it can be a dangerous distraction for a writer – and the last thing a writer needs is an extra excuse not to write!

It’s a work in progress, so I might have to get back to you on this one…

One book you wish you had written?

Anything by Carol Shields. She was a wonderful – and sometimes underrated – writer.

Any writing habits?
I like early mornings. 5am to 8am is my most productive time.

7) Fictional character you would most like to meet in real life?
Holden Caulfield. I want to tell him to hang in there, that he will work it out eventually, and that life does get better…

When Alice Salmon died last year, the ripples were felt in the news, on the internet, and in the hearts of those who knew her best.

But the person who knows her most intimately isn’t family or a friend. Dr Jeremy Cook is an academic whose life has become about piecing together Alice’s existence in all its flawed and truthful reality.

For Cooke, faithfully recreating Alice’s life – through her diaries, emails and anything using her voice – is all-consuming. He does not know how deep his search will take him, or the shocking nature of what he will uncover . .

An absolutely brilliantly constructed story, compelling and actually really quite scary when you can see, all in one go, how much of our lives are just out there in the ether for people to see. The little things and the big, the people who know you and who do not but will speak as if they do, even the smallest of details that you would not think twice about. When Alice Salmon dies, Jeremy Cook starts putting together her life and death through a series of interviews, online information and personal knowledge. Shocking and insightful this is a book you will NOT want to miss!

There is some wonderful writing, wrapped up in an almost matter of fact documentary style story, with surprises and emotional upset along the way,, exploring some extremely intriguing themes beyond that of the digital footprint and I was entirely wrapped up in the story of Alice from start to finish. A truly great read.

Even though we only see Alice through “What She Left” her character comes to life – it truly gives you pause for thought on how much information might inadvertently be out there about you and is an intelligent look at the onslaught of social media and what that means for privacy. How easily we give ourselves away. The author has wrapped this up in a truly compelling mystery that will keep you turning the pages to find out what happened to Alice – and indeed to the man who is writing about her life.