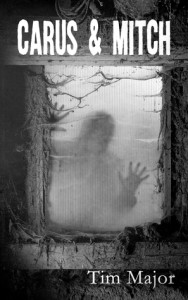 Today I am pleased to welcome Tim Major, author of Carus and Mitch, contributing to the ongoing Why We Write feature. Thanks Tim!

Why we write – Tim Major

Some writers say they write because they have to. If they didn’t, they’d combust or go crazy. I don’t have to write. I often don’t even want to write.

I can name a lot of things that I like about writing, though.

I like the process of writing, at least when it flows. I like the sense of progress in adding more words to words and seeing something take some kind of shape. I like the unexpected details and directions that were never planned. Some writers talk about characters taking charge of the story, but I don’t see it like that. I think that writing a story is more like opening a series of doors. You start writing, you open a door. You come to a series of options, you open another door. Soon enough you’re lost and you have to rely on your instincts.

Before I started writing fiction I kept ideas in notebooks. They weren’t story ideas. They were ideas for art projects, ways to make money, song lyrics. They were mostly awful, but it still seemed a shame that I never saw them through. A lot of those bad ideas have since turned up in stories, where I can see them through to their disastrous ends.

The same applies to dialogue. I suspect that most writers’ heads are filled with imagined conversations, improvements to things that other people say, or rebuttals long after an argument has ended. Writing seems like a healthy way to remove them from your head in order to concentrate on more important things.

It often feels that stories are built from nothing but the seed of an idea. On closer inspection it usually turns out that each story is littered with pieces of memories. Mine are usually either from my childhood or from details I’ve noticed in passing at the time of writing, with not much in between. For me, writing stories is both a good way to channel nostalgia and a good alternative to keeping a day-to-day diary.

There are more straightforward reasons that I like writing. It’s the cheapest hobby I’ve ever had. It’s the simplest, laziest way of having adventures. I like being part of a community of other writers, who are generally encouraging and uncompetitive. I even like sending out completed stories for consideration, which has all of the short-lived, giddy potential of buying a lottery ticket. I like the fact that writing a thousand good words can transform a crappy day into an excellent one.

So, there you go. I write because I like to write.

Tim Major lives in Oxford in the UK with his wife and son. His love of speculative fiction is the product of a childhood diet of classic Doctor Who episodes and an early encounter with Triffids.

Tim’s novella, ‘Carus & Mitch’, will be published by Omnium Gatherum on 23rd Feb 2015. His short stories have featured in Interzone and the Infinite Science Fiction anthology, among others.

Carus is only fifteen but since their mum disappeared, looking after her little sister Mitch is her job. There’s nobody else. Not in their house and not outside, either. There’s something out there, scratching and scraping at the windows.

The barricades will hold.