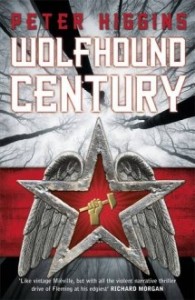 Thank you to the author and publisher for the review copy via netgalley.

Investigator Vissarion Lom has been summoned to the capital in order to catch a terrorist — and ordered to report directly to the head of the secret police.
A totalitarian state, worn down by an endless war, must be seen to crush home-grown insurgents with an iron fist. But Lom discovers Mirgorod to be more corrupted than he imagined: a murky world of secret police and revolutionaries, cabaret clubs and doomed artists.

So I always like to try a book that refuses to sit firmly in any one genre and WolfHound Century was just that very thing and very cleverly imagined.

The thing I loved most about this one was the descriptive prose that put you right in the moment – and the world the author has created here. It is almost fairytale like in its concept, but definitely Grimm and not Disney – and written so well you can see it as if it were real.

This is part political thriller, part dark fantasy and part mystery and the various strands of the story are woven together to great effect – if I had one small complaint it would be that sometimes the characters did seem very secondary to the environment they were living in – however as this is part of a series it is important that the mythology behind the story is ingrained and this was achieved well.

It is a bit of a slow burner – I rambled my way through the first few chapters, but once it kicked in, it was a definite page turner and I very much enjoyed it.

I look forward to the next instalment. Overall a terrific, well written tale with an interesting concept and fantastic imagery.