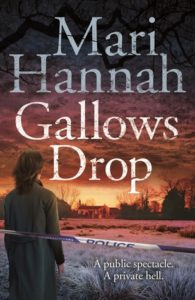 At dawn on a lonely stretch of road, a body is found hanging from an ancient gallows the morning after a country show. Hours earlier, DCI Kate Daniels had seen the victim alive. With her leave period imminent, she’s forced to step aside when DCI James Atkins is called in to investigate. There’s bad blood between them.

When Kate discovers that Atkins’ daughter was an eyewitness to a fight involving the victim, the two detectives lock horns and he’s bumped off the case. It’s the trigger for a vicious attack on Kate, exposing a secret she’s kept hidden for years and unearthing an even darker one.

Shaken but undeterred, Kate sets out to solve a case that has shocked a close-knit village community. As suspects emerge, she uncovers a curious historical connection with a hangman, a culture of systematic bullying, a web of deceit and a deep-seated psychosis, any one of which could be motive for murder.

I’m a bit of a closet fan of Mari Hannah’s Kate Daniels series, so when Gallows Drop dropped (?!?) through the letterbox I was one happy reader.

Even more so after actually banging through it, I’m fairly sure this is the best yet, so totally addictive and an absolutely gripping storyline with so many beautifully written layers to it I wouldn’t know where to begin.

Kate faces a lot in this book – blimey Mari, talk about loading it all on the poor lass – not the least of which is a murder just before she’s due to go on holiday and then a very unhappy blast from her past landing on her patch and out to cause her trouble. A lot of the character intrigue in Gallows Drop came from the slow unfolding knowledge of just what an impact Atkins has had on Kate. I was also strangely drawn to this character who whilst I detested him utterly would somehow like to know more about..

Then the mystery element which is superb, really, unpredictable and clever and with a cast of suspects to die for – all beautifully drawn, fascinating and multi layered, giving poor Kate another headache as she tries to untangle the truth from the lies. All whilst facing total personal turmoil on several fronts. An utter page turner.

Then the ending. Brilliant. Oh my gosh. I would use a different turn of phrase there but I’m trying to be child friendly. I think Mari Hannah and I need to have words..

Completely perfect for a crime and mystery read. I can’t even find one thing to call a downside. The themes explored here, the incredibly emotional rollercoaster that the author sends Kate Daniels on, then the perfectly placed heck of an ending makes this an easy one to tag Highly Recommended. 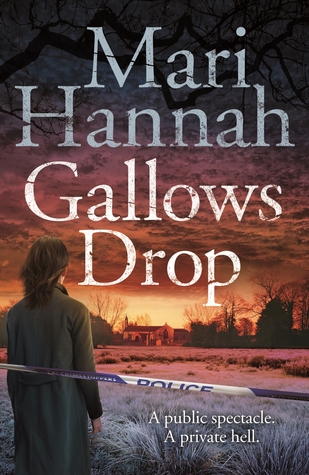