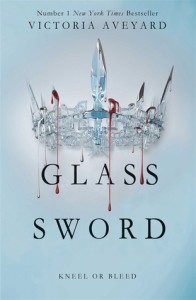 Mare’s blood is red – the colour of common folk – but her Silver ability, the power to control lightning, has turned her into a weapon that the royal court tries to control.

The crown calls her an impossibility, a fake, but as she makes her escape from the prince and friend who betrayed her, Mare uncovers something startling: she is not the only one of her kind.

Pursued by the Silver king, Mare sets out to find and recruit other Red and Silver fighters to join in the struggle against her oppressors.

But Mare finds herself on a deadly path, at risk of becoming exactly the kind of monster she is trying to defeat. Will she shatter under the weight of the lives that are the cost of rebellion? Or have treachery and betrayal hardened her forever?

And BOOM Victoria Aveyard does it again.

LOVED this. I was a huge fan of Red Queen the first in this series, and like Red Queen I suspect you will either love this with a fiery passion or not really be on board for the ride. There didn’t seem to be much inbetween back then but for me this was a pitch perfect part two. I’ve just turned the final pages, my heart is racing and I want to throw darts at the author because GODARNIT I’ve got to wait a year at least now. Really. There should be a law or something.

In Glass Sword Mare starts building her army – having been betrayed at the most basic level she trusts nobody at all – least of all herself. The mythology deepens, the character arcs expand, we find new friends and old and jeez can Ms Aveyard write a villain and a half. In trying very hard not to spoil Red Queen for those of you who might have missed it and want to start at the beginning I shall name no names…

This bangs along at a rate and a half – you have action and adventure (and some moments where you are gritting your teeth and praying to a God you might not believe in) a touch of romance which is so ingrained into the narrative that it is not in any way annoying (a trait that some YA Dystopia can suffer from) and in Mare you have a creative, infuriating, flawed and fascinating anti heroine who you will adore and detest in equal measure at certain points as events unfold. The Lightning Girl is feisty indeed.

All the characters are great, and the relationships that Victoria Aveyard builds and breaks between them will have you feeling all the emotions, there is a great mix of action and contemplation that works so terrifically well. As for that ending. OH THAT ENDING. **mutters a bit more**

Did I say I loved it? I LOVED it. Emma Kavanagh this one is for you. (I’m sorry) 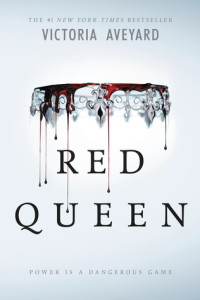 This is a world divided by blood – red or silver.

The Reds are commoners, ruled by a Silver elite in possession of god-like superpowers. And to Mare Barrow, a seventeen-year-old Red girl from the poverty-stricken Stilts, it seems like nothing will ever change.

That is, until she finds herself working in the Silver Palace. Here, surrounded by the people she hates the most, Mare discovers that, despite her red blood, she possesses a deadly power of her own. One that threatens to destroy the balance of power.

Fearful of Mare’s potential, the Silvers hide her in plain view, declaring her a long-lost Silver princess, now engaged to a Silver prince. Despite knowing that one misstep would mean her death, Mare works silently to help the Red Guard, a militant resistance group, and bring down the Silver regime.

But this is a world of betrayal and lies, and Mare has entered a dangerous dance – Reds against Silvers, prince against prince, and Mare against her own heart …