A Day with Clarice Starling – And with Valentina Giambanco 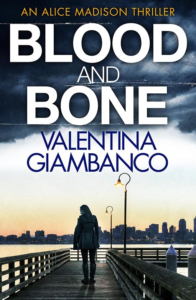 Today am very happy to have a guest post from V M Giambanco as part of the Blood and Bone blog tour and here she talks about hanging out with the F.B.I. Details on the book follow. Enjoy!

A day with Clarice Starling

I was there when Mulder met Scully, and I was there when Special Agent in Charge Jack Crawford asked trainee Clarice Starling to talk to the ultimate thriller villain, Hannibal Lecter. I was there because I have been watching the F.B.I. portrayed in films since I could watch films – I even worked on one as an assistant editor: a studio picture about an F.B.I. agent who infiltrates the New York mafia and ends up building an emotional, complex bond with the connected man who had vouched for him, and would ultimately lose his life because of it.

In short, even though my character, Alice Madison, is a homicide detective in Seattle, the F.B.I. has been a huge part in my mythology of U.S. law enforcement. A couple of months ago I had the opportunity to spend the day at the F.B.I. headquarters in NYC and it is fair to say that even though I was going to be in town for ThrillerFest, it was really the chance to walk those corridors that drew me across the Atlantic. The day was organised by ThrillerFest with clear understanding of what would get a bunch of writers to drop whatever they were doing and rush over. 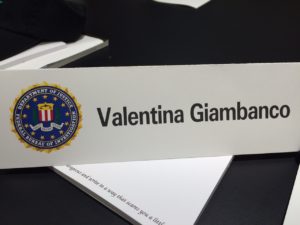 While it is certainly true that the F.B.I. has featured in many films and TV series it does not begin to compare to the number of detectives and uniformed officers that has populated the screen. The F.B.I. is different: it acts different, it has a different jurisdiction and it even dresses different – unless of course we are talking about counterterrorism agents undercover, but that’s a, yes, different conversation.

The security at Federal Plaza was as thorough as for boarding an international flight and then I was suddenly inside: inside the fictional representation of this building Fox Moulder and Dana Scully had faced terrestrial and extra-terrestrial threats. What would it be like to walk such hallowed ground? Well, quite honestly, it looked like a massive, corporate exercise for a designer who really liked oatmeal. It was very, very bland. The corridors were non-descript and the people I saw were unarmed, regular office workers whom I stood next to on the train every day. Then, of course, the presentations started and we listened in rapt silence as the agents spoke to us about hostage negotiation and rescues around the world, about cybercrime and the insidious threats it represent, about counterterrorism and the F.B.I.’s pursuit of political corruption. For a group of crime writers who had never met and talked to people who live the stories we make up on the page it was like Christmas. 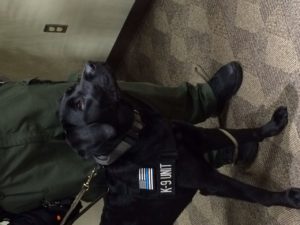 The agents had come from all kinds of backgrounds – the New York Office deputy chief used to be a teacher before he joined three decades ago – and yet they had something in common: they were all completely, absolutely, passionately invested in what they were doing. The two agents who ran a presentation about the unmasking, arrest and deportation of a number of Russian illegals (in this context not illegal immigrants but Russian spies who had come to the U.S., immersed themselves into American society and become essentially invisible to the eye of law enforcement) had been lawyers in their previous life and now they were having a wonderful time telling us about the spy who had simply handed over her laptop to the undercover agent because she was so sloppy it was ridiculous. They showed us video surveillance footage of payments passing from handler to spy in a subway stairway. And at the same time, they were quite upset as they recounted the fate of the American born children of the Russian spies who had been inevitably deported with their parents and whose future was uncertain.

The day had been brilliant but the F.B.I. had kept the best for last: how do you get one hundred writers to stand up and clap and go nuts? You bring them Iris, the first F.B.I. dog agent and only one of seven in the world who have been trained to sniff electronic devices. Think about a memory stick containing terrorist information. If the terrorist has hidden it behind a wall, Iris can find it. She will sit next to it, touch her nose to the wall and wait for her handler to reward her with kibble and a pat. I saw it happen, it looks miraculous.

The day ended with a visit to the F.B.I. gift shop and I assure you I bought as much as I could carry.

It was wonderful to see first-hand the kind of energy and commitment the agents brought to their work and I can’t wait to put it on the page. In the meantime, I go walking in the Lake District and I’m reasonably sure I’m the only one on the grassy hills wearing an F.B.I. baseball cap.

After two years in the Seattle Police Department, Detective Alice Madison has finally found the kind of personal and professional peace she has never known before.

When a local burglary escalates into a horrific murder, Madison is put in charge of the investigation. She finds herself tracking a killer who may have haunted the city for years – and whose brutality is the stuff of myth in high security prisons.

As she delves deeper into the case, Madison learns that the widow of one of the victims is being stalked – is the killer poised to strike again? But then her own past comes under scrutiny from enemies close to home, and Madison’s position on the force – and the fate of the case itself – are suddenly thrown in jeopardy. 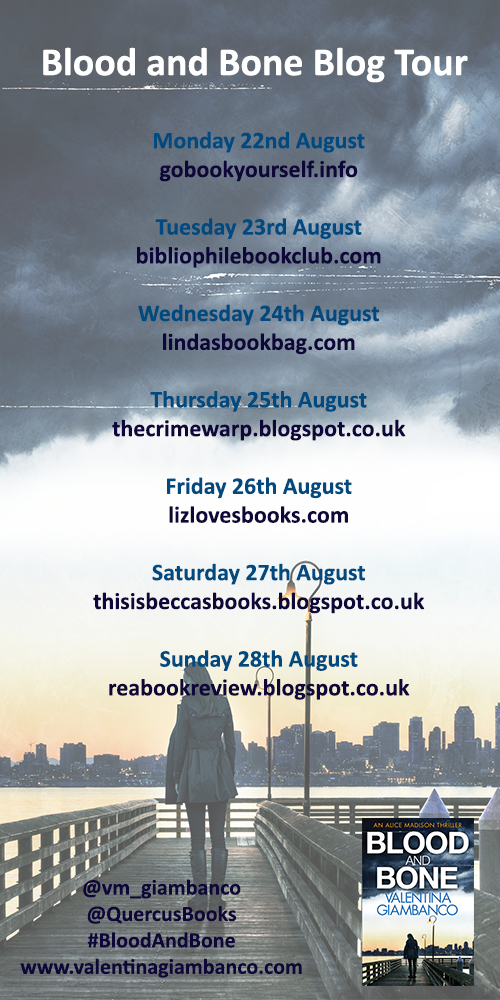