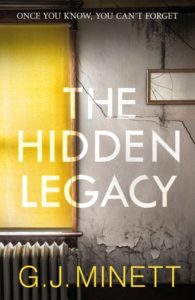 Today VERY happy to welcome the lovely Mr Minett to the blog answering a few questions for me about The Hidden Legacy amongst other things. You can get The Hidden Legacy in paperback right now – bookish details follow after this…

What has the road to being a published novelist been like for you? And how has life changed since you got the book deal with Bonnier?

The road has been a much longer one than I’m comfortable with admitting. I started writing stories when I was very young, wrote a novel in my mid-20s that attracted the attention of a top agent but didn’t make the breakthrough and then drifted through the professional and small family years, using these important responsibilities as an excuse for not really committing to my writing. It was only when I did an MA in Creative Writing and was taught to be more professional in my approach that I realised what was needed and made the necessary adjustments. That may be a fairly simplistic interpretation of a process that was a whole lot more fraught and challenging in reality but in essence that was what happened. I wasn’t doing what I needed to do and was lucky enough to have the right guidance.

Since getting an agent and then the initial two-book deal with Bonnier, I’ve been amazed at the way things have changed. Nothing, not even the MA course, could have prepared me for the changes that have come about since that amazing day when I heard I was going to be a published author. The main ones would be:

* I was resolute in my stance against social media. Nothing was going to persuade me that there was anything to gain from going on Twitter and Facebook which I regarded with the deepest suspicion. Now I spend two hours a day on it at the insistence of my publishers and understand just how essential it is if you’re going to get your name out there as a debut author

* I review books. Before the book deal I just read them but having devoured and often thoroughly enjoyed the 75 or so novels I get through in a year, it never occurred to me to go to Amazon and Goodreads and leave even a rating let alone a short review – I simply moved on to the next. Now I know from first-hand experience just how desperate authors are for feedback, good or bad as long as the criticism is constructive, and I also understand how important reviews are in helping to market the novels so I make a point of writing them.

* I now know all about bloggers and reviewers. Until I made a breakthrough, I assumed reviewers wrote for newspapers and that was it. I now realise there are so many reviewers out there, including some who have their own blogs which are as important to them as our novels are to us. And some of these are just so, so supportive it’s unbelievable. The reason they are in this at all is because of their love of reading and their fascination with the way authors go about their business and there’s a world of activity out there about which I knew absolutely nothing.

* I’m seriously under pressure for time to write new material. It never once occurred to me that this would be the case but ask any writer and she/he will tell you . . . there just aren’t enough hours in the day. If you have a job and also have to deal with all the fallout from social media plus requests for blogs plus personal appearances and attending launches for fellow authors, not to mention organising one for yourself, there’s not a lot of time left to sit back and compose a novel with the same level of deliberation and concentration you were able to devote to the first one. Not complaining, mind you – just taken by surprise.

There are plenty of others but not enough space here. I feel another blog coming on.

How about your own reading choices? Do you tend to stick within Crime and Mystery or spread your wings a little. What is the best book you have read lately that you would recommend to others?

I do read a lot of Crime and Mystery but that’s by no means all I read. It’s probably about 50/50. My favourite authors in that genre would probably be John Hart, Dennis Lehane, Robert Crais, Ian Rankin, Ace Atkins, John Sandford, Neely Tucker . . . there are so many. But I also read plenty of other genres as well – the classics, US authors from the first half of the 20th century (with Faulkner and Fitzgerald as all-time favourites) and a lot of modern literature from both sides of the Atlantic. The best two books I’ve read all year are in no way related to crime and they would be A God In Ruins by Kate Atkinson and This Must Be The Place by Maggie O’Farrell. They are two of my favourite contemporary authors, writers of outstanding ability and I’d love to spend time talking to them some day. If getting published brings me even half a step closer to meeting them, that will be the bonus to beat all bonuses. I think I’m little more than a literary groupie at heart!

On the writing front, what will be happening next for you? I know I have Lying in Wait still to read (can’t wait) and I loved, as you know, The Hidden Legacy so I’m definitely intrigued to know what might be coming up..

I have a third novel floating around in my head but nothing on paper as yet. August and September were optimistically (and naively) selected by me as the two months when I would get around to writing out the detailed plan with all its timelines and character sketches, a schedule which worked well for me with the two previous novels, but I’m still a good way from that. I know it will be a crime one, I know it will be set in a small seaside town somewhere in England and also in an amazing place called Peak’s Island off the coast of Portland, Maine and I have a sketchy idea of two of the characters but I need to do a lot of catch-up work soon or starting to write in October won’t be feasible. The story’s there though – has been for some weeks now. I just need time to flesh it out.

Can you tell us 5 random facts about you that would not normally come up?

OK. Five things that people won’t know unless they’ve been close to me for a while.

* I’m a complete philistine when it comes to food and drink. If I go to a restaurant I’ll probably go for the same option just about every time and it won’t contain vegetables or salad items if I can help it . . . pretty much anything green is ruled out really. And I’m married to a vegetarian!

* I nearly died from meningitis when I was in my early 20s. They were looking for a brain tumour and I’ll never forget the immortal words: Great news. It’s meningitis. If you’ve ever had a lumbar puncture, you’ll share my view that this is a curious definition of great news but I imagine these things are relative.

* I’m a sports addict. I’ll watch most sports but especially cricket, football, rugby, boxing and athletics. I tried to name our first son Courtney after a West Indies opening bowler but my wife Elaine said no for some reason. She liked the name Alex though and was happy to go along with a middle name of Stewart. Cricket fans will understand my moment of triumph there!

* I am the world’s least practical person. Putting up shelves, building patios, servicing the car or assembling flat packs are all disaster areas . . . or would be if I allowed myself to go anywhere near them. My spatial awareness is a thing of wonder. IQ test scores are all heavily dependent on the literacy and numeracy questions. Give me a shape with a chunk missing and ask me which of five chunks would fill it and I haven’t a clue.

* I may write about disturbed individuals who have endured difficult childhoods but none of that is from personal experience. I had a wonderful time growing up and have always had the most supportive family environment imaginable and make no apologies at all for seizing this opportunity to say so.

My wife suggested I mention that I snore but I think there’s such a thing as too much information…..

HA! Thanks so much!

1966. A horrifying crime at a secondary school, with devastating consequences for all involved.

Bearing the scars of a recent divorce – and the splatters of two young children – Ellen Sutherland is up to her elbows in professional and personal stress. When she’s invited to travel all the way out to Cheltenham to hear the content of an old woman’s will, she can barely be bothered to make the journey.

But when she arrives, the news is astounding. Eudora Nash has left Ellen a beautiful cottage, worth an amount of money that could turn her life around. There’s just one problem – Ellen has never even heard of Eudora Nash.

Her curiosity piqued, Ellen and her friend Kate travel to the West Country in search of answers. But they are not the only ones interested in the cottage, and Ellen little imagines how much she has to learn about her past . . .

Read my original review of The Hidden Legacy HERE