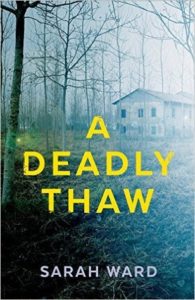 Every secret has consequences.

Autumn 2004
In Bampton, Derbyshire, Lena Fisher is arrested for suffocating her husband, Andrew.

Spring 2016
A year after Lena’s release from prison, Andrew is found dead in a disused mortuary.

Who was the man Lena killed twelve years ago, and who committed the second murder? When Lena disappears, her sister, Kat, sets out to follow a trail of clues delivered by a mysterious teenage boy. Kat must uncover the truth – before there’s another death . . .

Having been a huge fan of Sarah Wards debut “In Bitter Chill” I was looking forward to this follow up and once again she has given us an atmospheric character driven beauty of a novel in “A Deadly Thaw” that digs deep.

What I particularly love about it is how the author weaves a classically clever mystery element into a story that speaks to some difficult social issues, A Deadly Thaw  has a way of engaging the reader on more than one level. A man who was murdered, his wife confesses then years later he turns up dead again. Like a twist on the locked room mystery you are immediately hooked and trying to work out what the heck happened – like all good crime novels the ultimate resolution may surprise. Its that “ooh we are in for a good one” feeling. Yep you all know that one…

The wider plot speaks to many things that I can’t mention without spoiling the heart of this so suffice to say Sarah Ward tells an authentic and thought provoking story that will stay with you – with the narrative informed by both the police investigation and the other side of that as Lena’s sister Kat tries to unravel her family history, you get to see things from all angles creating a clever and involving path to the finale. I was in it all the way, that addictive element that raises the game when it comes to great books is here in full force.

Overall it was terrific – highly recommended as was the last novel – if you like your crime both real and entertaining then this is one for you. 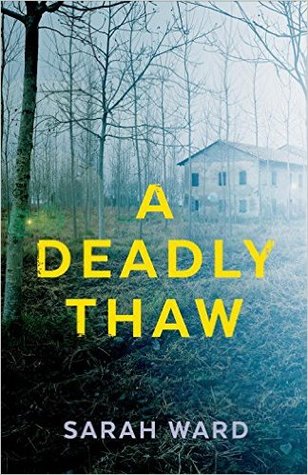