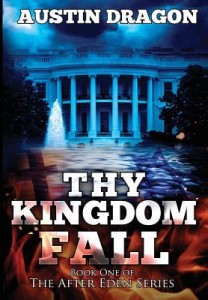 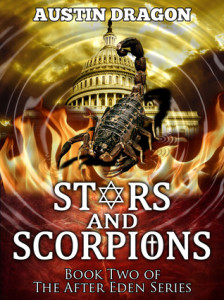 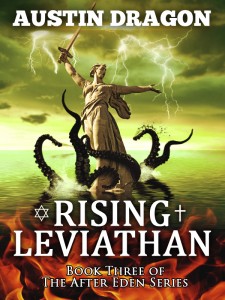 Today I’m happy to be part of the “After Eden” blog tour. I am currently immersed in Book 3 “Rising Leviathan” and I will be revisiting the series as part of another blog post on May 16th when you can find my review for that plus the series overall so keep an eye out for that one! For today, I asked Mr Dragon a few questions about the series and here is what he had to say.

Tell us a little about where the story came from for you.

The idea for the After Eden series came from two notions. Firstly, I’ve always been amused at the lack of “normal” religion in science fiction. Most often there is a complete absence of it, as if to suggest that we as the human race “evolve” out of it. Or if it is depicted it, there is an element of totalitarianism or craziness. With over five thousand years of Judaism, over two thousand years of Christianity, Hinduism, Buddhism, etc., and over three-fifths of the planet as religious believers of some kind, such a premise is not believable. If a religious person is bad, would they be good if they were irreligious? Hardly. And vice versa. Bad and good come in all stripes.

The other spark for the idea was broader. What if I was transported into the future as a civilian journalism for a brief time, what would I see? What changes would I see in terms of culture, entertainment, religion, politics, geo-politics, sociology, technology? Would it be a benign, Gene Roddenberry type future or a darker and more frightening one?

In the world created technology is key and in some places Religion is banned. Can you talk a little about how your own views and beliefs influenced the storyline?

I am religious myself—a Christian. I am also a very technically proficient and have been so since a child; so much so I once wanted to work for NASA. I’ve been very good at predicting trends all my life. When I lived in Paris for a year, terrorists had planned to fly a plane into the Eiffel Tower, but the plot was foiled. I said to myself that they would do the same thing in the United States. Little could I, or anyone, imagine 9-11.

The series is simply presenting a likely future. We are already a technology obsessed people. Image, how we will be seventy years from now. We will be much worse and much more integrated with our “toys.” Religious believers will continue to decrease here in America, just as has happened in Western Europe (with the exception of Islam). The ramifications of that will be inevitable persecution and worse.

More profoundly the series isn’t saying all religious people are good and all non-religious people are bad. It shows the complexity of the factions, that good, bad, and indifferent are in both camps. It also says that the more advanced, civilized and “evolved” we become in our man-made, great future that we actually don’t become a better species. That is something that has to be strived for separately and does not happen automatically like the latest update to our laptop or smart phone.

Is it difficult to keep a level of authenticity when writing this type of thriller?

Very hard. This series brought me back to writing after more than a fifteen year absence. However, starting was not easy. You’ve read the first two books. There are seven books in total and all swimming around in my mind—all the characters, events, politics, religions, plots, the timeline, etc. It was a very intimidating story to tell, but once I could break it up into separate books, and each book is in two parts, it became manageable. I’m very much enjoying this writing journey.

Do you have a favourite character from the books?

Very hard question because of how many there are. In Book one, “Thy Kingdom Fall,” Kristiana steals the show, but also Logan, “General” Moses, Mother Moses (called M), and Edison Blair. In Book two, “Stars & Scorpions,” Gideon, Shoshana, Goli, Tova, and Father Marcos. “Rising Leviathan,” Book three, has its own stars too.
E-Reader or Real book

real book, but I had to break down and get a Kindle recently.

I go to my local coffeehouse and write every day until the first draft is done.

3 people alive or dead you would like to have over for dinner.

If you had asked me even a decade ago, I would have a list for you, but I’ve taken care of them.

The After Eden Series Begins….

It is the morning of September 11, 2125. The New York City police commissioner stands on the 170th floor of the Three Towers clutching his chest above his heart in shock. The sky goes dark, filled with dozens of them—the opening attack of World War III! Not merely the planet’s third global war, but the first one of the Tek Age—a hell we have never seen before.