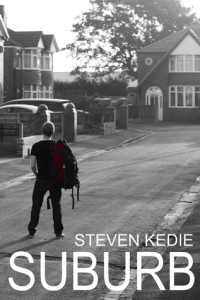 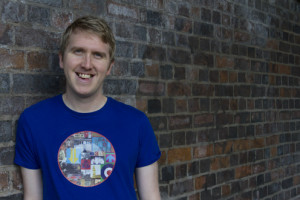 When Steven Kedie first sent me a copy of ‘Suburb’ and requested that I review it for lizlovesbooks, I didn’t know what to expect. I sent him a fairly standard reply, stating that I would take a look and let him know, but that I was fairly busy with work. 24 hours later I found myself emailing him again, this time to tell him that I’d finished the book already because I had NOT been able to put it down!

Following those emails he was kind enough to answer a few questions for me about ‘Suburb’, and here is what he had to say…

What inspired you to start writing Suburb?

The opening line in the book is: I returned home from three years at university to find my parents exactly where I had left them. I guess the answer to your question is in that line. I wanted to write about somebody returning home after being away for a long period for the first time and not identifying with home in the same way as before they left. I wanted to explore how they deal with feeling like their friends, their family and, in Tom’s case, his ex-girlfriend, haven’t moved on. I wanted to look at how difficult it is to feel different when no one else does. It’s a strange time; you’re not an adult yet, but you’re not a kid anymore either. The world feels like it’s in front of you but you can’t touch it.

How much of Tom’s character, and his experiences of being stuck at home after University, are based on your own life?

There are pieces of Tom’s life that are based on mine:  the suburban upbringings, parents who work hard to give their children opportunities they didn’t have, a desire to travel and see more of the world than the streets around where we grew up.  I felt like Tom feels at 21 years old. I was unsure of my place in the world and what I wanted to achieve from my life.

One of the major differences between us (apart from the fact Tom has an affair with a married woman) is I didn’t go to university.  Friends did, but I started work at 18, moved into another job at 20 and quit when I was 22 to go backpacking around Europe with my now wife. I experienced the feelings of returning home from a long period away when I flew home from that trip. In Suburb Tom feels removed from his surroundings and from many of his friends. That’s how I felt following my trip. The difference between my situation and Tom’s is Tom is preparing for his adventure, I had returned from mine.

Which part of the writing process did you find most difficult?

Getting the time to write the first draft. Finishing the first draft, typing that last sentence, it’s a feeling like no other. When you hit the last full stop and you know that the story is finished, it gives you such a rush of excitement. And that excitement and energy drives you on for the following drafts. But first drafts take me such a long time that trying to find solid blocks of time to work on it is the most difficult thing for me.

How long did it take you to write the novel?

Two and a half years from first line to published. I would say 18 months of that was the first draft.

What advice would you give now to graduates who feel stuck in a rut?

This is a difficult question for me to answer as I was never a graduate.   I can only talk about my own experience.   Travelling gave me a confidence in myself I hadn’t experienced before and allowed me to see that I could survive outside my comfort zone. That has helped me in later life. My parents didn’t want me to quit a steady job to go on a long holiday. But I knew it was right for me. I knew I’d regret not going.   So if I have to give advice: You’re only young and free of responsibility once. Try and enjoy that time. See some of the world. The experience you gain might change your circumstances in a way you hadn’t anticipated. If not, it’ll at least be fun.

What’s next for you (and Tom!) – can we expect to see a sequel, or perhaps something completely different in the pipeline?

I’m currently working on the first draft of my new novel, which is very different to Suburb.   It’s a first person account of an Olympian’s life over the course of 3 Olympics (2008-2016). There is a lot more research involved in this story, which means the whole process in slower than Suburb.   The themes that stand out so far are rivalry, and how the dedication and sacrifice of the athlete has an impact on his relationships.

As for Tom; his story is complete. He was a character that enabled me to write about a very specific time in a person’s life. I don’t want to mess with that or write the Tom Fray Life Story series. The things he experienced in Suburb, all the drama, the feelings, and the eventual outcome, have set him on a journey that the reader can imagine for themselves. I’m happy for them to do that.

Tom Fray leaves university with a simple plan; get a job, save some money and go travelling.
To put his plan into action he moves home to the suburbs of Manchester where he finds the people he left behind all stuck in the same routines as when he went away.
Feeling trapped between his old and new lives, Tom is desperate to escape. Then he meets Kate, a married neighbour, and his simple plan becomes a lot more complicated.

Whether you’ve been to university or not, you will relate to this novel. All of the characters are truly recognisable; you will feel like you personally know each and every one, and remember the relationships you had with your own real life versions. The setting is reminiscent of everyone’s hometown, and despite the fact I’ve never visited Manchester I could picture each and every scene in my head. The dynamic between Tom and his friends, parents, sibling and one woman who turns into something a little bit more, plus the problems and emotional turmoil that they go through, manages to be riveting yet oddly comforting at the same time.

This isn’t an exciting book. Tom’s story is not going to blow your mind, and there are no big surprises or amazing adventures, but what it does have is LIFE. It’s a coming of age book, for those in their twenties who haven’t quite made it to adulthood. Halfway through reading this book I logged in to my Internet banking and transferred £200 over to pay off some of my student overdraft, because it really made me think about MY life and where I want to be right now. Give it a go – you never know what impact it might have on you!