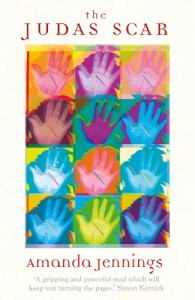 I was recently lucky enough to read “The Judas Scar” from Amanda Jennings and it was an amazing read so I asked her  a bit about it all and here is what she had to tell me.

Tell us a little bit about how the story started forming for you ?

My husband got phone call from a police officer who was investigating allegations of abuse thirty years previously at his school. Though he wasn’t a victim himself, I was struck by the weight of buried emotion the call unleashed. He became a little obsessed with finding out what had happened to those boys he was pretty sure had been affected. As it turns out the majority who were affected had coped very badly going into adulthood and it was this idea that started eddying around in my head, of how the effects of a damaged childhood can have far-reaching impact not just on the person but also on those around them.

Do you have experience or know of someone who has experienced bullying?

I wasn’t bullied myself, but I remember vividly the first time I saw someone, a girl in my year at school, bullied. I came from a pretty sheltered environment, was close to my parents and sister, didn’t really know such a thing as bullying even existed really, and to see people be cruel to another was shocking. I felt impotent, too, I knew I wanted to step in but as a child you have this little voice of self-preservation that screams at you to keep away and not involved yourself. When I was older, from about 14 onwards, I would step in without any thought at all if I felt someone needed help. Finding the strength to do the right thing and stand up for those who need support and help is important. In the book I focus a lot on the reasons why some people might be less equipped to deal with bullies, why they might feel vulnerable, but I also touch on the abhorrent notion that not all adults have children’s best interests at heart and that occasionally you will come across an adult who abuses his position of trust with the children he or she is supposed to be responsible for.

I am very fond of Frank, the man who helps out in Will’s wine shop. I’d like to be his friend. We’d have a lot of fun discussing books and films and animals over a good glass of wine. My favourite character to write, however, was Alistair Farrow. I loved having a character I could make as odious as I wanted. He was great fun to draw.

Without giving anything away, do you think that any of the characters were justified in their actions?

The thing is – and I believe this in life – is that I feel it’s not straightforward to classify an act as ‘wrong’ or ‘right’. The world is only made up of shades of grey. Do I think those things the characters do are ‘right’? No. Do I understand why they acted in that way and how they felt they had no choice? Yes, absolutely. It’s this very reason I love writing the type of books I write – internal conflict fascinates me.

Physical. I tried to love ebooks but I just can’t enjoy them as much. I love the smell and feel of paper books. Also, as I read, I do a lot of flipping back to reread bits if I need to clarify something, and I can visually remember roughly where something is in a paper book. The percentage thing floors me!

I love a cocktail or three when I go out. Anything sweet and with rum or vodka. And I do like a nice glass of very cold Rose when the sun is out and the BBQ is fired up.

Yes, I buy a new notebook for when I start any new book project. Even those books that don’t make it past the jotting down ideas stage. If it’s a new idea, it needs a new notebook. It’s almost becoming a superstition now!

Giving up sugar. I have a terribly sweet tooth and yet when I’ve experimented and cut sugar out of my diet for a few days I feel amazing, energised, less bloated, with my appetite under control, and less grouchy. You’d think given I know this I’d be able to turn my back on the sweet stuff with no problem. Nope. Can’t do it. It’s an addiction I wish I could kick.

Scars. We all carry them. Some are mere scratches. Others run deeper.
At a school rife with bullying, Will and his best friend Luke are involved in a horrific incident that results in Luke leaving.
Twenty-five years later their paths cross again and memories of Will’s painful childhood come flooding back to haunt him. His wife, Harmony, who is struggling after a miscarriage that has hit her hard, wishes Will would open up about his experiences. But while Will withdraws further, she finds herself drawn to the charismatic stranger from her husbands past, and soon all three are caught in a tangled web of guilt, desire, betrayal.

Oh what a tangled web we weave…and this was a beautifully evocative character driven tale of those things which haunt us and shape who we are. With some intensely drawn and authentic characters to lead the way this was dark, addictive reading of the best kind.

This is one of those stories where you get SO involved in the lives of the people within its pages that they become very real to you. You want to comfort them, shout at them, turn them back from the brink…and you live through every single moment with them. I loved Harmony, loyal yet torn between want, need and love. I felt deeply for Luke and was endlessly annoyed at Will..the next reader will see it all differently no doubt and therein lies the beauty of the writing.

The story ebbs and flows in a compelling way – as a look at the psychological effects of bullying it is realistic and emotional. The things that happen to us in childhood resonate on and when that experience is as harsh and often violent as bullying can be there can be long term damage that isnt always easy to see. This comes across extremely well here – again because of the characters who truly tell the tale.

Dark themes here, handled with intelligence and compassion, I thought this was terrific. Highly Recommended.