Author Interview: Gilles Petel author of Under The Channel. 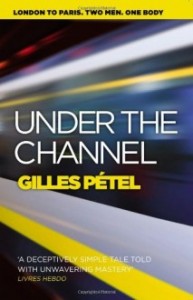 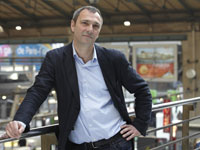 I was recently lucky enough to get the chance to ask Gilles Petel some questions about his wonderful noir novel, here is what he had to tell me.

Tell us a little bit about where the idea came from.
I lived in England for 4 or 5 years and I was looking for a plot to write a novel that takes place in London. I already had John Burny’s character but it wasn’t enough to write a whole tale. One day I read in an English newspaper some surprising news: a Russian spy had been murdered in a luxury London hotel. I had my plot! I just had to change some details. Fiction can’t copy reality. The Russian spy became a Scottish estate agent. The murder happened in the Eurostar (because I caught that train every 3 weeks!). And then I created Roland’s character, the French lieutenant. All those details, Burny, a murdered spy, a train under the channel, Roland and of course London were quite enough to start to build a novel.
Roland really is a wonderful character – is he based on anyone you’ve met in life?
I never met Roland in real life! He’s a pure invention. I probably put in him details I observed on many people. A character comes rarely from a single person. As many authors I like to condense or to compress many characters in a single one. I likely have a wide imagination. And you can add the source of the many novels I’ve read over 30 years!
Do you have a particular favourite character from the book aside from Roland?
I really love Kate! She’s a free woman. She lives as she has decided. I think she’s a strong woman. She knows what she wants. In the same time she’s absolutely sexy or at least I imagine her like that. Of course she’s not what we call a good person (she’s unfaithful), but nobody’s perfect!
Can you tell us anything about your next project?
It’s difficult to speak about a novel I’m still writing. I just can say it’ll be finished in a few weeks.
Any writing habits?

I use to write my novels in the morning and sometimes very early in the morning when the town is silent. But I find my ideas (I mean the characters, the plot, details of the events) in the evening or late at night with one or two shots of whisky.
If you could live anywhere in the world…

I think I would likely go back to Istanbul where I lived when I was 24 years old. Or maybe back to London, which I still love very much.
3 people alive or dead you would love to go for a drink with.

Review:
When the body of a Scotsman turns up on board a Channel Tunnel train at the Gare du Nord, Parisian detective Roland Desfeuillères finds himself in charge of a murder investigation. Roland decides to travel to London – and not just in order to progress the inquiry. It’s also a chance to escape his troubled marriage. Arriving in a city gripped by the financial crisis, Roland immerses himself in the victim’s hedonistic lifestyle, as he searches for the motive behind the crime. But the longer he walks in the dead man’s shoes, the more Roland discovers about himself . .

This was a wonderfully quirky and sometimes quite dark tale, driven by some beautifully drawn and intriguing characters and with an eye definitely cast towards the ironic side of life. Its not a long read but its a darned good one, mainly I think because Roland Desfeuilleres is SO much fun to follow along with – his actions and reactions to situations thrown at him will have you sometimes laughing and sometimes shaking your head in disbelief.

When a body turns up on the Channel Tunnel train, Roland decides he wants to pursue the killer onto the streets of London – kind of falling into the investigation as a way of escaping his desperately troubled marriage to a rather difficult (well I thought she was difficult!) woman. As he attempts to find out more about the victim, he finds himself more and more aware of himself and his life.

The start sucks you in as we meet the murder victim still very much alive – in a brilliantly humerous set of events that see him eventually get on that train for France. Unfortunately for him, he is not going to make it to the end of his journey. Enter some eclectic french characters including Roland and we are off on a wonderful reading journey. Back in good old England we have another magnificently drawn bunch of people and at the heart of all this sits Roland – a character I shall miss very much now this tale is at an end.

Terrific and evocative, I recommend curling up on a rainy afternoon with this one and letting it transport you into other lives.