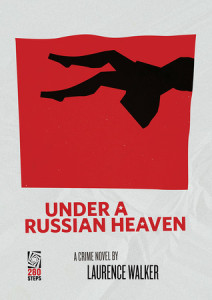 Laurence Walker works in London as an energy journalist. He spent a number of years working in Russia and the former Soviet Union. His work-related travel – which has taken him to places as diverse as a coal terminal in Russia’s Arctic Circle and the tobacco fields of southern Kyrgyzstan – and the people he’s met along the way have provided inspiration for his fiction writing.

I recently was able to read “Under a Russian Heaven” and also lucky enough to be able to ask the author a few questions. Here is what he had to tell me.

Tell us a little bit about how the story started for you.

The story pretty much came to me all in one go, with the writing process simply expanding on my initial plan, albeit with a few twists and turns. I’d wanted to set a noir-style novel in the seaside town of Hastings, but as I considered the settings more, I felt by placing the lead character in Russia (for part of the story at least) I could better express his feelings of isolation and paranoia.

How influential has your travel experience been on your writing?

Time spent abroad was certainly influential for this book, in terms of giving first-hand descriptions of the various settings. But I don’t think the storyline owes that much to my own experiences.

I do tend to come up with story ideas while I’m travelling, probably because I often end up visiting foreign countries on my own. I have more time sitting alone in restaurants, lost in some back street, delayed at an airport terminal or just staring at the hotel ceiling, to observe and think about these places, and the things that could potentially happen there, than I do at home.

Are your characters based on anyone you met in real life?

The “Charlie” character is based loosely on a couple of people I know, as is the shady “Slava”. Other than that, they are purely fictional.

Are you generally a fan of Noir novels yourself?

I am, although I came to noir novels via the films. I’ve had an interest in film noir for years, and an evening lazing in front of a film like “Out of the Past” or “The Asphalt Jungle” is always an evening well spent. I read books from a variety of genres, but it’s always a bonus if there’s a touch of noir, and at least one femme fatale.

It’s set in Central Asia, and involves a serial killer, a bit of political intrigue, and some dark, moody places and characters.

Best book you have read lately

Orwell’s Nineteen Eighty-Four. It’s one of those books I should have read years ago, but never got around to. For some bizarre reason, I kept telling myself since the year 1984 had already passed, the novel wouldn’t be so relevant. I wish I’d read it earlier.

First thing you would rescue (apart from family and pets) from a burning building.

I guess it depends on what the building was, but assuming we’re talking about my own house, with the exception of my wife and two young sons, there isn’t much that can’t be replaced. I’ve got some antique, first edition books that I’d want to hold onto if possible, although I doubt I’d risk my life for them. The bulk of my CD collection was stolen a few years ago, so I suppose much of the damage has already been done… It’d perhaps be a good excuse to begin life afresh, in a new town or country.
3 people alive or dead you would like to go for a drink with.

A very difficult question, as the list is potentially endless. However, to be sure of a good evening, I think I’d like to have a drink with Winston Churchill, who’d no doubt be full of interesting anecdotes. And I’d like to meet with any number of writers – from Chaucer to Chandler. I’d decide who closer to the time. Finally, I’d be interested to meet with some direct ancestor from the distant past, so I could see what character traits – if any – are handed down the ancestral line and to what extent the things that make me tick are simply inherited. Would we choose the same beer at the bar, or laugh at the same jokes? I haven’t listed anyone living, as there’s still some chance I could meet them anyway.

Thank you so much for taking the time.

Set in Russia and in the English seaside town of Hastings, Under a Russian Heaven follows James Eastaway, a young Englishman working as a teacher in a provincial Russian city, whose carefree life as a fledging expat spirals out of control after he meets the beautiful daughter of a local businessman.

A short sharp and intriguing read – clever pacing and a distinct “noir” feel to the prose gave a wonderful atmospheric touch to proceedings, putting me in mind of classics of years gone by.

James was a compelling character, all the more so as his life spirals out of control, I was fascinated as I watched things develop. The author keeps you right in the moment always, often using dark ironic humour to achieve this.

The settings are extremely well described, making you see the people and the places in your minds eye and adding to the overall ambience of the reading experience.

All in all an accomplished and clever story – I would love to read a longer length novel by Mr Walker – the only negative of this one for me was that I would have liked more.