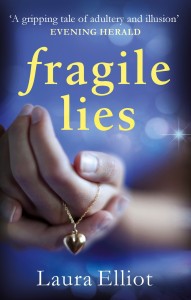 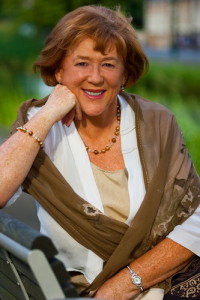 To celebrate the release of Fragile Lies by Laura Elliott from Bookouture I had the chance to ask her a few questions. Here is what she had to tell me.

The story behind Fragile Lies evolved from a newspaper feature I wrote about homelessness. I spent the night on the streets with young people who had left home for various reasons. I did one interview with a young man on the Great South Wall, an industrial area in Dublin’s docklands. He was living in this isolated area in a makeshift shelter and he was willing to talk about his life on the streets.

When I returned to my car, I noticed the dimmed lights of a car parked on the pier. A second car arrived. A man emerged from one, a woman from the other. They embraced before walking into the shadows. I wisely left them to their own devices but as I drove away I wondered why they were meeting in such a secret location. I assumed they were having an affair. A story began to form in my mind. A hit-and-run accident as one of them drove away. The victim a homeless person, someone on the edge of society. What would be the consequences? Would anyone really care. And, even if the couple got away with it, what would it do to their relationship? Even though the novel developed its own creative momentum, that sense of intrigue, secrecy and deceit stayed at the forefront of my mind and created a cast of characters who answered those questions for me.

The dynamics of all the various relationships are very authentic, did you have a favourite character to write

My favourite character was Lorraine who is beginning her life over. She retreats from the world then slowly emerges as the story progresses. I created a fictitious name for the location of her story but it is based on a real place on the Dingle Peninsula where I holiday every summer.

Did you always have that ending in mind or did things change as the story came to life?

The story changed as my characters emerged and created their own dynamic. I knew how it was going to end but had no idea how I would get there. I’ve learned to trust that mysterious force within me and be confident the jig-saw pieces will slot together. It’s as if the book is already written but is waiting for the right words to release it.

I’ve just finished reading It’s Not Yet Dark by film maker Simon Fiztmaurice. I’m still reeling from its effect on me. It’s wonderfully written, inspirational, and the poetic prose is sparse and exact. Simon is a young father of five and he is living with motor neuron disease. He has lost the ability to move and wrote It’s Not Yet Dark on an eye-gaze computer. It’s a story about the preciousness of true love – how it is possible to communicate when the movement of an eye is a language – and that life, no matter how constrained, should be cherished.

My best ideas come to me when I’m drifting asleep. From past experience I know they will be forgotten by morning so I keep a notepad beside the bed to jot them down. Those few crucial words will jog my memory when I awaken. One of my bad habit is a tendency to change my style of writing when I read a book that impresses me. The resultant work is always deleted within an hour or two and it’s back to my own style. We learn from the greats – but each writer must discover their own distinctive voice and be true to it. Anything else will be stilted and unsatisfactory.

I wish I could paint. I’ve often considered taking art classes but, somehow, I never find the time. Perhaps, I’m afraid it will become another consuming passion and I can only cope with one at a time. So I create characters like Lorraine who find solace through art.

His name is Michael Carmody.
He is a writer and a father.
His son is lying in a coma, fighting for his life.

Her name is Lorraine Cheevers.
She is an artist and mother.
An illicit affair has destroyed her marriage.

Michael is desperate to find the couple who left his son for dead, a victim of a hit and run.

Lorraine is desperate to start a new life for her and her daughter.

Michael and Lorraine are about to cross paths – damaged souls, drawn to one another.

They don’t know that their lives are already connected.

They don’t know the web of lies surrounding them.

They are each searching for the truth. But when they find it, it could destroy them both.

This was a gorgeous story in a lot of ways, great psychological depth to it, some terrifically drawn and compelling relationships and absolutely beautifully written.

I loved the way this was constructed, following an interlinked set of people, some of whom do not realise that they are held together often by a lie being told, the intricacies of the plotting make this a really terrific and heartfelt family drama with a dark heart.

I adored Lorraine – she was a very real person with whom I felt a connection, going through a huge upheavel, trying to find happiness whilst protecting her daughter and finding a life balance that she can live with. The relationship between mother and daughter is elegantly done, one of the strengths of the story for sure. Then we have Michael, who I often did not sympathise with as much, facing a crisis head on and struggling with some emotional issues. Both apart and together they will discover some haunting truths.

The story ebbs and flows perfectly, giving a focus to what is happening now and then showing you the events that lead up to tragedy – it is an often haunting and sad story yet with flashes of hope and happiness – an imaginative and authentic look at life, love, relationships and deceit. Not everything is straightforward, there are some twists and turns along the way, some very topical issues examined, overall it really was a wonderful read.