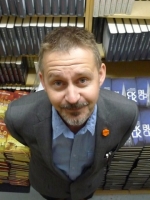 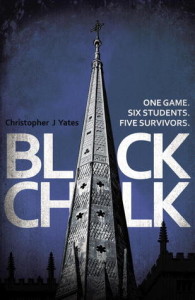 So today sees the release of “Black Chalk” a wonderful and addictive twisty tale from Christopher Yates. I was lucky enough to read this in advance and it is one of my favourite books this year so far. I caught up with Mr Yates and asked him a few pertinent questions and here is what he told me…

Black Chalk is a dark involving read – was it fun to write and did it evolve or did you always know where it was going?

Well, when the process wasn’t dark and involving it was certainly fun – good writing days are a thing of occasional, luminous beauty. I certainly didn’t know where my tale was going. I didn’t even know that one of my game-players was going to die. All I knew was that, through the playing of this game that my characters invent, there would be brought to the human surface certain qualities buried inside or deliberately suppressed by them. And that this would lead to a dreadful deterioration of their friendship. I enjoyed discovering some of the directions the story ended up going as much as I hope the reader will.

It has such great characters – do you have a favourite?

Hmm, I’ve been interested to find out readers’ favourites. I thought perhaps everyone would pretty much have the same ones but I’ve been surprised to discover that’s not the case. And that’s very pleasing, I’d like to think it means I did a decent job of giving something appealing to each of their characters. Do I have a favourite? OK, I’ll admit to being a little bit in love with Emilia. And Jack was definitely the most fun to write.
I love the “story behind the story”.. do tell us about the origins of The Game!

Absolutely. And there really is a story behind the story. I was at Oxford and I genuinely did come up with the idea for the game in Black Chalk while I was there. We thought very seriously about playing. We would sit around late at night, much as my characters sit around late at night in the book, chatting about this game, a sort of psychological version of truth or dare. Thank goodness we never played. But perhaps that’s because we never met a mysterious society who offered to provide funding. If we had, I might not still have been around to have told the tale.

Black Chalk is set half in the US, where I now live, and half in the UK, which I still consider home (having been born there and lived there for more than thirty years). But my next story is set entirely in the States. It means I have to write in American, so to speak, which is an enjoyable challenge. The story concerns a twelve-year-old boy, Patch, who stands by as his best friend commits an awful crime. Consequently, a girl, a friend of theirs, suffers a horrific injury. Thirty years later, the events of the past are reignited.

Favourite thing to do on a lazy Sunday afternoon.

Oh, when I was in Britain, going to the pub with the Sunday newspapers, spreading them across the table, digging through the piles for interesting stories, reviews, recipes… Now, I actually prefer non-lazy Sundays. I love to take long walks in the beautiful countryside of upstate New York at the weekend. I think it gets the creative juices flowing for the next week of writing.

Both. But mostly tea. Tea reconnects me with Britain every day. I order huge parcels of Yorkshire Tea from Amazon at regular intervals. (Although New York has GREAT coffee.)

The one thing that drives you mad?

You mean I can have only one? OK, well in that case, I sheepishly admit to being a very angry pedestrian. Often I’m fuming at cyclists. I love walking in Manhattan and I’m disappointingly (to myself) very law abiding. So when I have the right of way, I get incensed at being shouted at/cycled at/whistled at by law-breaking cyclists. I mean I get it, they’re angry because they get abused by the cars. But then they go and take it out on the poor pedestrians. It’s a case of ‘big fish eats little fish’. All the way down the food chain. And we pedestrians are the most vulnerable, at the bottom. I could keep writing about this at some length. But maybe I should stop now.