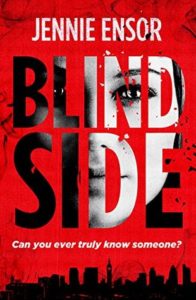 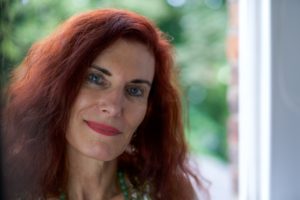 Today I am very happy to welcome Jennie Ensor to tell us about some of her writing challenges as part of the Blind Side blog tour. Thanks Jennie!

Writing about the extreme recent events – some of the challenges

It struck me when I was editing Blind Side for the final time these past weeks that the time I wrote about is actually recent history. When I first started writing the novel, around 2005, the London bombings and other events I mention were fresh in my mind. Over the years though, so much has changed in the world that this period now seem very much in the past. So I suppose there’s an element of historical fiction to the novel. These days suicide attacks worldwide happen with a terrifying frequency – in 2005 there seemed to be a element of disbelief that London had been targeted by suicide bombers. Lots of small things have changed too. For example back then pubs were smoky places and people didn’t have i-Phones.

The challenge of setting fiction in the relatively recent past is that so many more people actually have experienced the events compared with say the 1940s. Writing about terrorist attacks and terrorism is has further challenges – I’m aware of how many people suffered greatly as a result of the London bombings, or have distressing memories of this period. There are also definite challenges as far as creating tension when you are describing real events. Even if the reader hasn’t directly been impacted by them, ‘what actually happened’ is more or less agreed on so you can’t mess with that framework. But inside that framework there are many possibilities, no one version of reality.

I’ve tried to describe 7/7 and the attempted bombing two weeks later in way that people can recognise, to make them true both factually and emotionally. I’ve drawn on my own experiences of being in London that July – and the months immediately before and after – and those of others. Georgie goes to work by Tube the morning of 7th July and has to walk home afterwards. All around her she sees signs of the terrible thing that has happened, such as a woman’s spilled shopping on the pavement. I don’t take the reader into scenes of carnage, because I don’t need to. It’s often true that the more powerful the thing that one is writing about, the more one needs to stand back for the reader to feel its impact.

There’s a source of tension from the ‘train crash’ situation of the inevitability of real-life events, coming from what the reader knows must happen next… and another kind, out of the reader’s not knowing and having to guess along with characters what might happen next. So tension comes from characters interacting within the fixed framework of events, while their experiences are conveyed as vividly as possible through what they see, hear, smell etc, as well as their thoughts and emotions. For example when Georgie sets off to find Nikolai on 22 July, hours after the failed nail bomb is discovered, she knows what has happened from news reports and sees the effects of it at the bus stop and in the behaviour of people on the bus she takes towards Finsbury Park. She becomes increasingly concerned when she can’t reach Nikolai on her mobile; she doesn’t know where he is, what he might be doing and why he hasn’t contacted her. Impatient to get to him, imagining all sorts of scenarios, she avoids waiting for another bus and walks the rest of the way down a former railway line – a path I happen to know well – experiencing the stifling sensation of the hot and humid air, semi darkness and the almost unnatural silence after a traffic-filled road. She must go on a journey to reach him without knowing the outcome, and so I hope will the reader.

In the past strand of my novel, set in Russia and Chechnya I also describe imagined extreme incidents based on actual or probable happenings during the second war. I had no direct experience of these events, fortunately. But the scaffolding also comes from real events obtained through research, conversations with people and fact finding, and my imagination has filled in the spaces between.

To end, sometimes a writer tries to imagine not just the ‘space between’ actual events but another possible set of events that might have happened only no-one found out about them, or they weren’t fully realised. I’ve done this to an extent in Blind Side, imagining a horrific scenario that had to be carefully fitted around the framework of actual events. No room left to say anything else, I’m afraid.

London, five months before 7/7: Georgie, a young woman wary of relationships after previous heartbreak, gives in and agrees to sleep with close friend Julian. She’s shocked when Julian reveals he’s loved her for a long time but felt unable to tell her.

Despite some misgivings, Georgie can’t resist her attraction to Nikolai, a Russian former soldier she meets in a pub. While Julian struggles to deal with her rejection, Georgie realises how deeply war-time incidents in Chechnya have affected Nikolai. She begins to suspect that the Russian is hiding something terrible from her.

Then London is attacked…

Blind Side explores love and friendship, guilt and betrayal, secrets and obsession. Can you ever truly know someone? And what if you suspect the unthinkable? An explosive, debate-provoking thriller that confronts urgent issues of our times and contemplates some of our deepest fears. 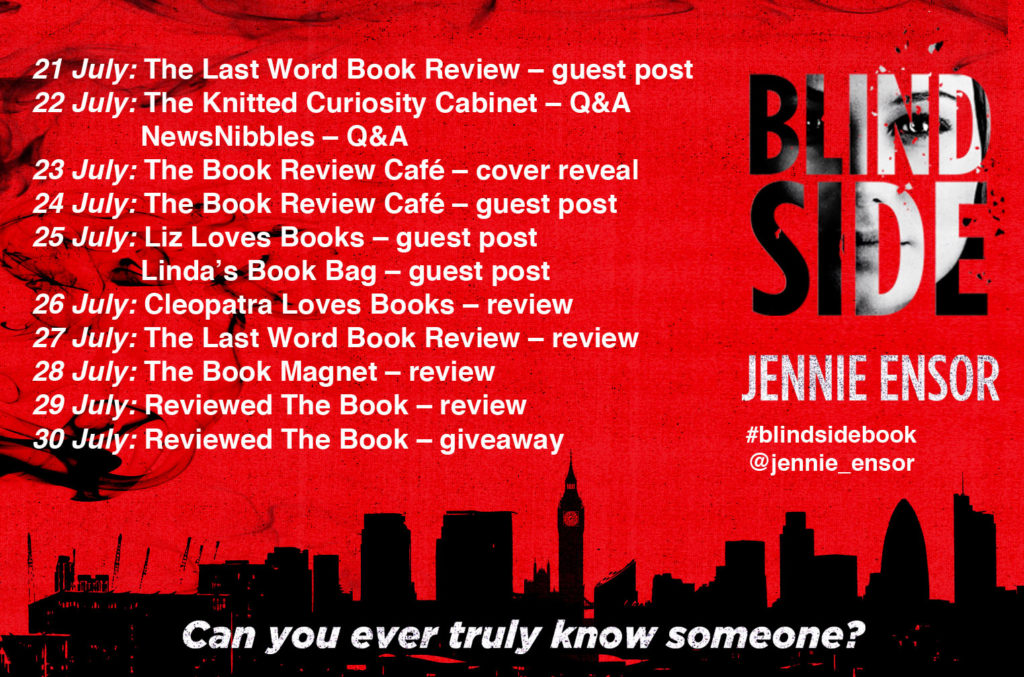