Try Not To Breathe – Getting to know Holly Seddon. 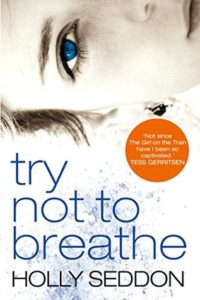 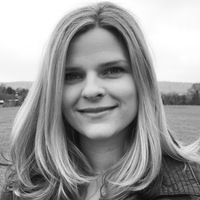 Try not to Breathe was a brilliant book I read earlier this year (my review and details to follow) so I was very happy to get to interview Holly Seddon and find out more about the author behind the story. Thanks so much for taking the time Holly!

I grew up in various small towns and villages around the Westcountry but spent the longest time – from 11 to 19 – living in Devon. I went to tonnes of schools, some of them more welcoming than others, and I was a bit of an oddball. I once carried a dead bee around all day to give it a proper funeral back at home, so as you can imagine how many kids were queuing up to be my friend.

My parents definitely weren’t the type to work 9-5 in the same job for years, so they did lots of interesting things and I inherited their itchy feet. They were very encouraging and understanding. They thought we could do or be anything, in never crossed their minds that we shouldn’t.

My dad’s a brilliant cook and when I decided (aged nine) to be a vegetarian, unlike a lot of parents, he threw himself into creating lots of meat-free meals for me. He never once complained, even though it was a gigantic pain. I didn’t realise how unusual that was at the time. He was a stay at home dad for a while and that was a real privilege as a daughter. My mum has a super strong work ethic and there were times when she strapped on steel toe boots (disguised as stilettoes) and broke down a lot of career doors.

I have a younger sister who I thought was the worst curse when she was following me everywhere and is now one of my favourite people in the whole world. 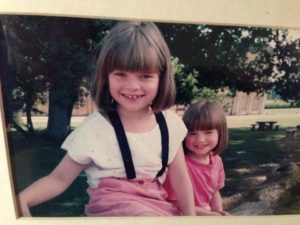 A bit of both. Art and English were the subjects I enjoyed the most, but I got better grades in science and maths. I failed music GCSE though, on account of not being able to read music. Turns out you can’t wing it on pop culture knowledge alone.

Honestly? Being an author. Always.

Not as a specific moment, but my earliest memories generally revolve around reading and writing. Including when I wrote and drew all over the living room wall. It was supposed to be a nice thing for my parents to find… they didn’t really see it like that. I got such a wallop.

Anybody who can do the right thing in a room of people telling them that’s the wrong thing.

I once farted doing the shot put at sports day. Which isn’t a very literary story.

I also tried to wear heels to work and fell over in front of a tabloid editor and had to be dragged back up by the elbow.

Most of my stories are about farts or falls. 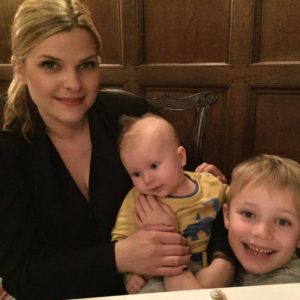 Is there a talent you would like to have but are useless at?

Playing music. Especially guitar or piano. I slogged away for a good ten years trying to master the guitar. All those years wasted. I’m so jealous of people who are naturally gifted at that kind of thing. Hopefully sometime during my lifetime, some twelve-year-old whizz kid will design a musicality app we can just plug into our brains.

DIY enthusiast, who then has to have help ‘undoing’ the mess I’ve created.

Can I be greedy? Staying up at night but then rising at lunchtime to soak up the sun (in my farfetched dreams).

Life After Life by Kate Atkinson.

Running with Scissors by Augusten Burroughs.

One piece of life advice you give everyone.

Nothing is ungetoutofable. So you might as well give it a go.

Alex is sinking. Slowly but surely, she’s cut herself off from everything but her one true love – drink. Until she’s forced to write a piece about a coma ward, where she meets Amy.

Amy is lost. When she was fifteen, she was attacked and left for dead in a park. Her attacker was never found. Since then, she has drifted in a lonely, timeless place. She’s as good as dead, but not even her doctors are sure how much she understands.

Alex and Amy grew up in the same suburbs, played the same music, flirted with the same boys. And as Alex begins to investigate the attack, she opens the door to the same danger that has left Amy in a coma…

Read my review of “Try not to Breathe” HERE

To Order “Try not to Breathe” clickety click right HERE